Early on the final circuit, Gabynako moved to the front for Darragh O’Keeffe and he turned in a fine round of jumping to retain control 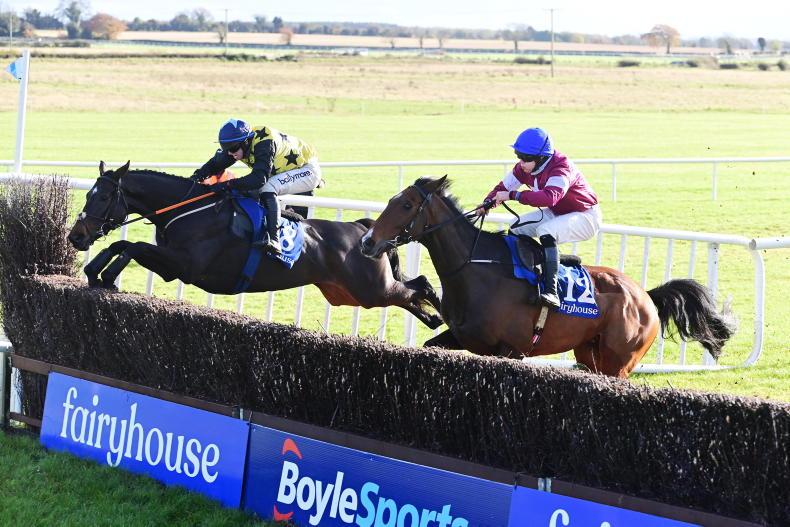 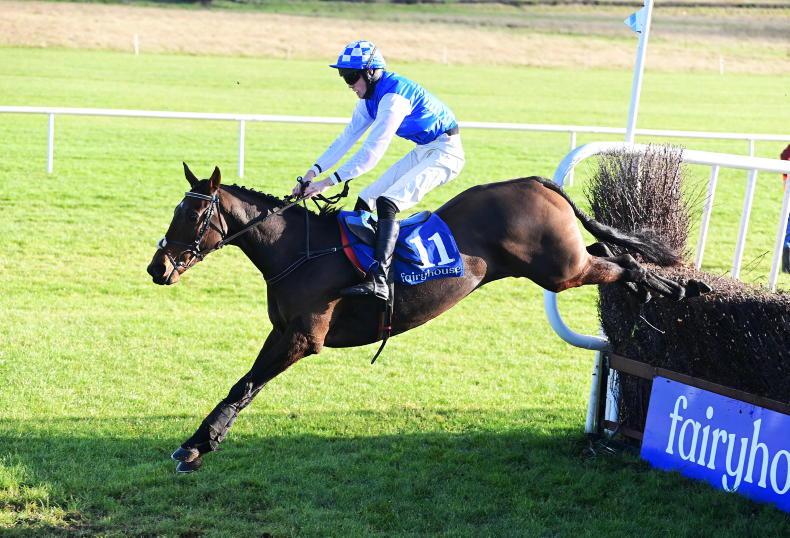 GABYNAKO signalled that he will be a force in some of the better novice chases this winter with a thoroughly likeable triumph in the Irish National Hunt Steeplechase Committee Beginners Chase.

The Gavin Cromwell inmate, who was placed at Grade 1 level over hurdles last term, picked up invaluable chasing experience when losing out to Noble Yeats at Galway a month previously.

Early on the final circuit, the Mick & Molly Syndicate-owned six-year-old moved to the front for Darragh O’Keeffe and he turned in a fine round of jumping to retain control of this two-mile, five-furlong affair. Midnight Run threatened after two out and then a rallying Fury Road came with an effort after the last but Gabynako carried the day by two and a quarter lengths. “He gave an exhibition of jumping. I have him in the Drinmore and I thought that could be a bit sharp for him but the way he jumps it may not be and we’ll definitely consider that for him,” declared Cromwell.

Philip Fenton’s Stand Off (3/1) got his chasing career off to an encouraging start in the two-mile novice chase for horses rated 123 or less.

A useful hurdler, the John Power-owned and bred gelding took a little while to warm to his task under Mark Walsh but the patiently ridden son of Milan made ominous progress on to the heels of the leaders before two out and he got the better of Stansfield after the final fence to reach the line with two and a quarter lengths to spare.

There should be more to come from the winner as he moves up in trip.

AFTER his treble at Navan on Sunday Gordon Elliott reeled off another one which was completed by the promising Glenglass in the Irish EBF (C&G) Point-To-Point Flat Race.

Only four went to post for this contest but the finish may well have been fought out by two promising types in the Bective Stud-owned winner and O’Moore Park who impressed in a point-to-point victory last month.

The Jamie Codd-ridden Glenglass (evens) hadn’t run since his successful point-to-point debut at Tallow in February 2020 and still looked quite green at stages but he produced a likeable display from the front.

When the tempo picked up in earnest in the straight, the odds-on O’Moore Park (whose jockey Pa King picked up a three-day whip ban) threw down a strong challenge but hard as he tried he could never find a way past the leader who kept finding more to score by a neck.

“He should make a lovely jumper and I think that is what we will do now so we’ll head for a maiden hurdle next month,” said the trainer.

Elliott’s day kicked off with a victory for Motown Maggie in the Berkshire @ Kedrah House Mares Maiden Hurdle over just short of two and a half miles.

After reaching the frame on her first three outings the daughter of Doyen, who carries the colours of David Barnard, took a step forward in first-time cheekpieces. Davy Russell had the 3/1 chance on the pace throughout and Motown Maggie was able to keep her rivals at bay when she struck for home turning for home.

A good jump at the last from the four-year-old played its part in her holding off the staying-on favourite Banntown Girl by three-quarters of a length.

“She was game and I think the cheekpieces helped her. She stays galloping and tries hard and I’d imagine she will step into a mares’ handicap hurdle,” declared Elliott.

The trainer then added to his haul as Happy D’Ex justified 2/5 favouritism in the Irish EBF Mares Point-To-Point INH Flat Race.

A winner of a point at Dromahane last May, the KTDA Racing-owned four-year-old looked to have matters in hand when Jamie Codd got her into the clear to make her bid entering the last quarter of a mile.

However, the daughter of Saddler Maker had to fight hard once getting to the front as the 100/1 chance Alpine Annie chased her all the way to the line and was just half a length adrift at the finish.

“She’s having a good blow and I’d expect her to improve a lot from this and she won a three-runner point and Jamie said she will learn a lot from this. We might go jumping hurdles now and the softer the ground the better for her,” commented Elliott.

A FINE season for Derrylin trainer David Christie, which yielded a big priced winner at Aintree last weekend courtesy of 80/1 chance Koshari, got even better when Vaucelet landed the hunter chase over three miles.

Now a winner of all three of his starts in this sphere, the Jennifer O’Kane-owned six-year-old was returned an 11/10 favourite to follow up a wide-margin pointing success at Portrush last month.

Barry O’Neill produced the son of Authorized to take charge of this four-runner contest after the second last and Vaucelet went on to defeat Snugsborough Benny by five lengths.

“Even though he won an open the first day, it was a nothing race and the last half lap he was just on his own cantering, so it was no preparation for that up against hardened horses,” remarked Christie. “He could be a horse to go to Cheltenham for the Foxhunter and might go to Down Royal next month but I’m not going to run him on really deep winter ground.”

ROBERT Tyner has his string ticking over nicely and he is on course to post his best seasonal tally for a number of years after Direct Image landed the Lorna Brooke Ireland v Britain (Q.R) Challenge Handicap Steeplechase over three miles where the improving daughter of Shantou made it three wins on the spin.

Michael O’Sullivan was again on board the Michael Walsh and John Carroll-owned mare who he partnered to victory in another amateur riders’ race at Punchestown last month. The 5/2 joint-favourite took over in front before the second last and asserted in ready fashion to defeat fellow market leader Favori Logique by seven lengths.

Victory in this challenge event went to the Irish team who were on board the first four finishers.

Matthew Smith supplied a well-backed winner of the John Thomas McNamara Series (Q.R.) Handicap Hurdle as Fulysse, who was backed from 33/1 into 12/1 for her first outing in 13 months, struck under Paul Bannon.

The Debbie Kelly-owned mare looked held when Carnet De Stage moved ahead early in the straight but she rallied splendidly to get back in front at the last before clinging on by a neck from the oncoming Sefton Warrior whose jockey Adam Leahy picked up a three-day whip ban.