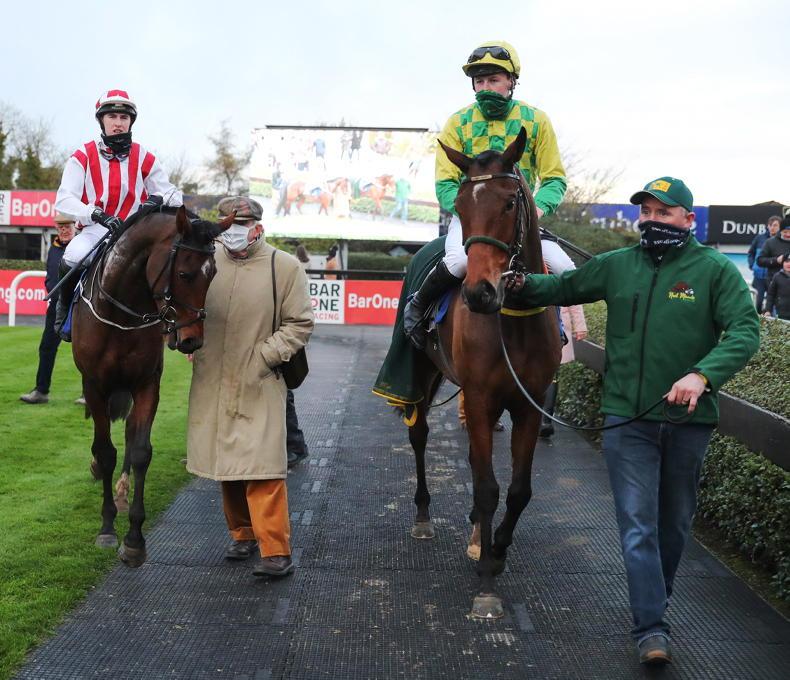 Kilbunny Pontic ridden by Harry Swan and Royal Romeo ridden by Pat Taaffe being led in after dead-heating in the Bar One Racing Giving Cash Back Daily Pro Am Flat Race \ carolinenorris.ie

Rest Of The Card

A GREAT day for Henry de Bromhead and Rachael Blackmore got even better as a resurgent Gua Du Large struck at 25/1 in the Grade A €80,000 Baroneracing.com Handicap Hurdle.

This Robcour-owned five-year-old was a capable novice hurdler last term but lined up with questions to answer following an abject effort at Down Royal a month previously.

The son of Kapgarde showed that run to be all wrong though and, fitted with a first-time tongue-tie, he came with a strong charge in the straight.

After moving into contention on the run to the last, he then picked off the 5/1 joint favourite Magic Tricks before lasting home by a neck from Glan.

“He was very disappointing last time when I think he struggled on the ground. The tongue-tie may well have made the difference. He got the breaks today and everything went right and it was an amazing ride from Rachael,” commented the trainer.

The card began with a victory for James Nash and Gavin Brouder as Alohamora (3/1) bagged her first win in just under two years in the Bar One Racing Irish EBF Mares Handicap Chase. The Alamo Eight Syndicate-owned front runner kept up an unfaltering tempo at all stages and maintained a useful lead over the favourite, Hurricane Georgie, in the straight to score by six and a half lengths.

“With Gavin claiming 7lb I thought that she had a small chance and she has put it all together today,” stated Nash. “She got a terrible fall at Catterick last year and the next time she ran over fences she pulled herself up so I wasn’t sure what would happen until she got down over the first couple of fences today.”

The two-day meeting concluded with a tremendous finish to the Bar One Racing (Pro/Am) INH Flat Race where Noel Meade’s Royal Romeo (7/2) and the David O’Brien-trained Kilbunny Pontic (14/1) dead-heated for first.

Royal Romeo was ridden by Pat Taaffe and was confirming the promise of his debut second to American Mike while Kilbunny Pontic was fulfilling the potential of her unchallenged point-to-point success for Richard O’Hara at Curraghmore a month previously.

The Delton Syndicate-owned mare was ridden by Harry Swan who goes to college with and shares a house with his fellow winning rider Pat Taaffe.

Kilbunny Pontic carries the same colours of the 1993 Cheltenham Festival hero Fissure Seal and looks quite the bargain having cost just €2,200 as a store last year.

The promising dead-heaters finished a length and a half in front of the favourite Sa Fureur whose jockey Jamie Codd picked up a five-day improper riding ban for an incident inside the last quarter of a mile where the fourth-placed Realistic Optimism got tightened up.