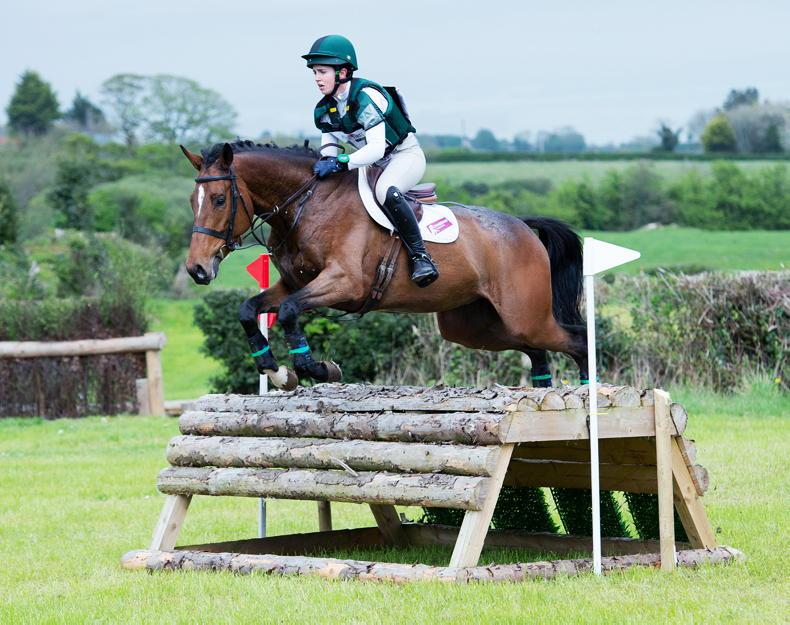 CASEY Webb had three rides in the 16-strong EI100 at Hazeldene (1) last Saturday and won with one of the two thoroughbreds she partnered, Patricia Duffin’s home-bred Hiya Sonny (32.3), while finishing second on David Mitchell’s home-bred Irish Sport Horse mare, Our Pollyanna (33.3), a traditionally bred daughter of the Cruising stallion, Yeats.

Both of Webb’s mounts completed on the dressage scores they were awarded by Janet Hall whose leaders fell foul of the jumping phases. It was a particularly galling result for Elaine O’Connor who, in spite of a fence down show jumping, was still in the lead on 27.3 penalties with Sir Barnabus setting out on the cross-country course but was eliminated for omitting the roller to birch corner (14ab) on the new loop.

O’Connor’s husband David was lying second after dressage on Nakuti (29) but picked up eight show jumping penalties before going clear across the country. This resulted in O’Connor and the 10-year-old piebald gelding dropping to fourth behind Rosie Alcorn and Goodwins Royalty whose total of 36.8 included six cross-country time penalties.

This was a first win on his third start for Hiya Sonny who, at one stage, was in training to run in point-to-points with former international event rider Ross Crawford. The six-year-old Winged Love gelding is out of the Duffin-bred Maolisa (by Jamesmead) who Stuart Crawford sent out to win a point-to-point and a maiden hurdle.

“When the point-to-points were off because of Covid, Patricia sent ‘Sonny’ to me for some flatwork and jumping,” explained Webb. “He was very inexperienced but jumped and moved well so she then decided to pursue eventing with him. Patricia has been a very good supporter of mine so I’m delighted she got this win. Both Sonny and Polly will continue to be produced on the Northern Region circuit so their owners can watch and enjoy them.”

It was a very good day for the Webb family as Casey’s brother Carl, who works for Bravo Hughes Ltd, qualified the five horses he jumped at Barnadown for the Sunday session of the Horse Sport Ireland Studbook series qualifier.

The cross-country course in the EI90 caused quite an amount of grief but not as much as the Aaron McCusker-designed show jumping track in the sand arena from which just nine of the 25 who jumped exited without additional penalties.

That nine did not include the winners, David O’Connor and the ISH mare Tullymurry Katie, who, bar a hors concours entry, led following Lucinda Webb-Graham’s judging of the dressage phase on 22.5 but lowered one pole for a total of 26.5.

Tullymurry Katie, who has finished third three times this season and fifth once in her four previous starts, is owned by O’Connor’s mother-in-law, Marian Turley, who bred the Camiro de Haar Z mare out of Tullymurry Summer (by Song Of Freedom).

Sixth in similar company on her debut at Tyrella (4), the Susan Cummiskey-owned and ridden Bonmahon Snow Leopard won the EI80 (T) when completing on the joint-winning dressage score of 26.3 penalties she was awarded by Coreen Abernethy.

The nine-year-old Bonmahon Master Blue mare, who was bred in Co Waterford by Francis Fitzgerald, is out of Bonmahon Vixen Flight (by Artist VDL) and is thus a full-sister to Bonmahon Silver Vixen (CCI3*-L).

Emily Corbett, who was blighted by health problems at the start of the year, recorded her best finishing position of the season when second here on the newcomer Stevie Wonder (30) whose 3.2 cross-country time penalties happily didn’t affect his placing.

Joint-first after dressage, Jackie Hanna and Elamo Royal Diamond were one of five combinations eliminated across the country – they left out the B element of fence six, three others jumped the wrong side of a flag at fence 10 and one combination got the big E for three refusals on the course.