Galway show jumping rider Duncan McFadyen and Cruise Along Water Lily were joint winners in the five-year-olds along with Chris Ryan's Tobias, ridden by Jason Furlong 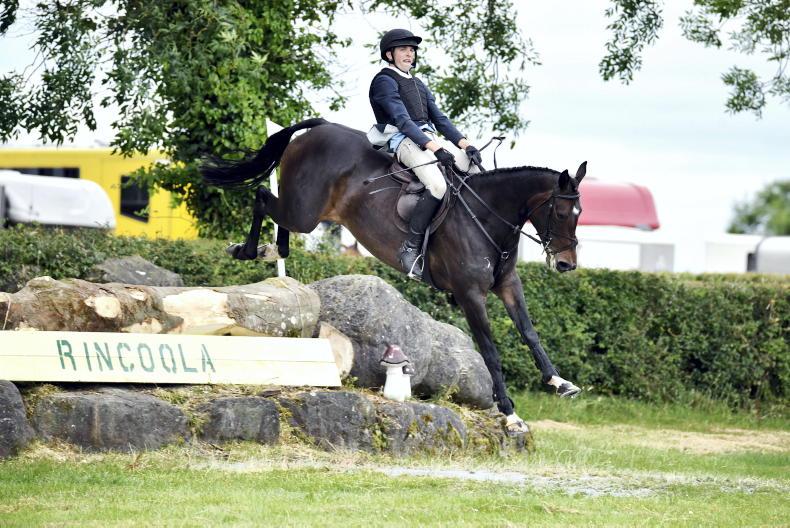 Duncan McFadyen and Cruise Along Water Lily were the joint-winners of Section B of the five-year-old class at the Young Eventhorse Series at Rincoola \ Tadhg Ryan Bit-media.com

GALWAY show jumper Duncan McFadyen is due to take on some of Ireland’s top event riders at Dublin next month as, at Rincoola on Wednesday, he booked a ticket for the young event horse championships at the RDS on Cruise Along Water Lily.

The traditionally bred Irish Sport Horse mare by CC Captain Cruise topped the final scoreboard in Section B of the five-year-old class on 308 points along with the previously qualified Tobias, a thoroughbred gelding by Sans Frontieres who was ridden by Jason Furlong for Chris Ryan.

The latter was bred by William Neville out of the unraced Shernazar mare Moon Approach who comes from a family with plenty of blacktype on its pedigree page. Cruise Along Water Lily, who has 80.5% thoroughbred blood, was home-bred by her owner, Jenny Jakeman, out of the unraced Monsoon Maisy whose winning connections were mainly in the point-to-point sphere.

Also previously qualified, Carrie Meehan’s Silvano gelding MBF Silver Bridge (298.6) finished third in the hands of Nicola Ennis with the Dublin tickets going to the Dignified van’t Zorgvliet mare BGS Easy Flow (297.9), who was ridden for owner/breeder Paddy Byrne by his son Patrick, and KDSL Touch Of Power (297.1). The last-named, a Cara Touche gelding, was ridden by his owner, Sean Looney.

In Section A, there was also a divide but this was for second place on 312.5 points, between two of the Ennis sisters, Niamh Tottenham on her home-bred Scarteen winner, the Tyson gelding Slieve Callan Gael, and Sarah Ennis on husband Niki Potterton’s Quantino gelding Dolmen Stellor Design.

Here the winner was the also previously qualified Belline Newmarket Delight (313), a Newmarket Venture gelding home-bred by owner Richard Ames out of his Castlecomer Q mare Obrian Delight. The Dublin tickets therefore went to Paul Donovan’s Limestone Olympic Time, who was partnered by Corentin Gautier to finish fourth (312.3), and the KEC Maximum Joe gelding Balinagore Maximus (306.3) who was ridden by Sean Looney for owner Mary Mangan.