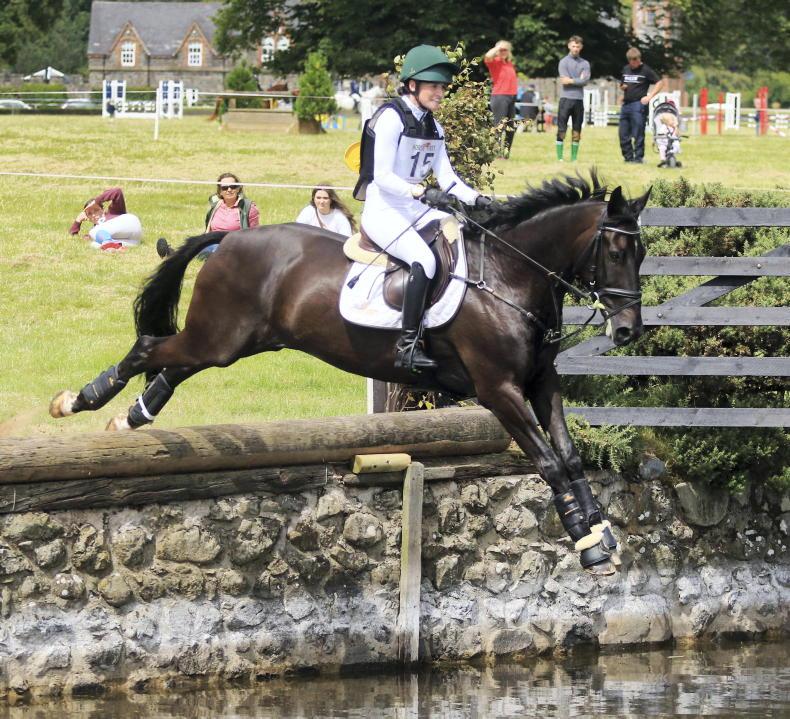 ELLA Boyle and Grafenstolz Distinction bounced back from their retirement in the CCI3*-S at Ballindenisk early last month to win Saturday’s EI110 (Open) despite adding four show jumping penalties to their Rosie Gomes-awarded dressage score (24).

Boyle and her mother Amanda’s 11-year-old Grafenstolz gelding had won an EI110 (Open) at Rosanna 2 before heading to the Co Cork international where they led the 37-runner field after the first phase only to leave two rails on the floor. Having dropped down the order, Boyle then decided to retire her mount following a stop across the country.

With no amateur class at this level on Saturday, Denis Currie had to take on open opposition with Arodstown Aramis. Their day started well as they led the eight-runner field on 23 penalties.

However, two poles down show jumping saw them lose their hold on the top spot and, a second over the time across the country, they had to settle for third (31.4) as Anita Doherty recorded the only double clear to finish second with Threeseas (29.5).

“The course rode really well and had a couple of good questions to give everyone something to think about,” commented Boyle. “Obviously though, being Loughanmore, it was the usual beautiful galloping track.

“My horse was super. I don’t have any big plans for him really as I’m still building myself back up after my accident at the start of the year. To be honest, it’s been hard coming back, both mentally and physically, so the win means a lot.”

Boyle and boyfriend Adam Haugh are not long back from a holiday in Canada which obviously did them both a power of good as Haugh also partnered a winner, Aileen Goodwin’s Holstein mare GH Andorra, in the EI110.

Having led after dressage, a knocked pole saw Suzanne Hagan drop to second with Karolita O and she and that Dutch Warmblood mare increased their total to 27.7 when a second over the time on the final leg.

Meanwhile, leaving all the poles intact but picking up 0.4 of a time penalty, Haugh and GH Andorra moved into the lead with the six-year-old daughter of Adagio de Talm recording her first EI victory on 24.9.

On a score of 43.4, Jonny Steele may have been last of four following Vanda Stewart’s judging of the EI115 dressage phase but, with the addition of just 0.4 of a show jumping time penalty, he was in front where it mattered on Zermatt (43.8) who was making his debut at this level.

The tall, nine-year-old gelding by Centre Stage was home-bred by owner Caroline Keatley out of the Arc Bright mare Chamonix with whom Jim Newsam represented the Irish Sport Horse Studbook at Le Lion d’Angers in 2006.

Ninth on her debut at her home base of Tullymurry, the David O’Connor-ridden Tullymurry Grace saw off 21 rivals as she completed on her winning Lucinda Webb Graham-awarded score of 24.5 in the EI90. Five other combinations went double clear headed by Victoria Clarke on her five-year-old Lancelot gelding Fun Time Frankie (25.5) who was having his fourth start.

The winner, a four-year-old Chillout mare, was bred by O’Connor’s mother-in-law, Marian Turley, out of Tullymurry Holly (by Camiro de Haar Z).