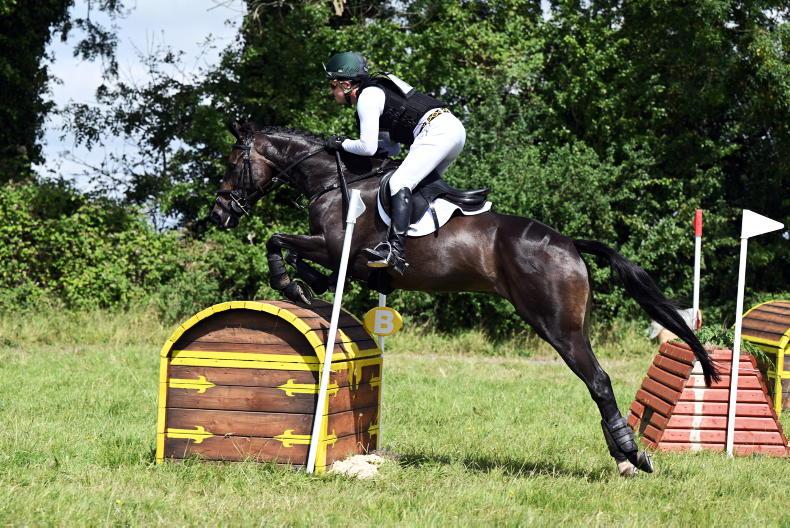 Ciara Power, who led after dressage on 24.6 with Rossmount Aldi Hero, took it a lot slower across the country to finish second on 43.1 with Heidi Hamilton, who too jumped a double clear on The Sequel, placing third on 45.1.

Emily Barrett, who had been lying third after dressage and a clear show jumping round, was also clear on the final leg with Oakfield Cooley but in a time of 8m 13 (the optium was 5.45) which garnered her 59.2 penalties

As his name would suggest, the six-year-old Road To Happiness gelding Drumnaconnell Kobie was bred by his owner, Lawrence Patterson, out of the Kings Master mare Kings Jewel. This win came after a sixth and a fourth-place finish in the CCI2*-S at Ballindenisk International (2) and, more recently, in the CCI2*-L at Kilguilkey House International.

From an entry of eight, there was one no-show, one withdrawal after dressage and another after show jumping in the HSI Le Lion development class for seven-year-olds at EI115 level. It would be difficult to assess this class as a form guide for Le Lion as there were jumping faults and cricket scores of time faults so best just to say it was won by Christine O’Donnell on her ISH gelding BGK Valentine, a seven-year-old son of Craigsteel whose total of 61.3 was considerably less than his three rivals who completed.

Cliona Mitchell was the sole starter in the EI110 (Open) with Treliver Desdemona but there were 20 runners in the unrestricted EI110 class where the first two in the final standings both completed on their dressage scores.

Trim’s Michael McNally led throughout on Tom Mullen’s VDL Arkansas gelding Killard Gem (26.5) who was having his third EI start, his third at this level, his first of the year and his first under the Trim rider who commented: “I don’t know a lot about this fellow but he knows his way around as he did a lot of Pony Club eventing and show jumping.

“I thought the ground was very hard but I needed to get a run into the horse as I plan on stepping him up a level the next time he runs or the run after that.”

Killard Gem was bred in Co Tipperary by Rachel Sterling out of the Farney Clover mare Hogans Lass whose previous produce include the Watermill Swatch gelding Cooley Timepiece (CCI4*-L) and the Lupicor gelding Lup The Loop (CCI3*).

Eliminated on her last two starts with Murphs Legend, owner Amy Lambert passed the ride on the once-raced Alkaadhem gelding over to Patrick Whelan who partnered the eight-year-old into second here on his dressage score of 30.8.

Having run out the winner of the EI115 (Open), Ian Cassells brought up a double in the 40-strong EI100 where he completed on his first phase score with the six-year-old Gorsehill Magic (28.3) who was having his sixth start. The Hermes de Reve gelding was bred by Anne Bannon out of her Master Imp mare Gorsehill Magic.

On her previous two visits to Punchestown, Gillian Beale King won a class. On this occasion, she recorded her best place finish of second here on Belline Castle Fifty Seven (29.5) who had been eliminated at the May fixture. Ten horses completed on their dressage scores, one other ridden by Cassells and three by Michael McNally.

One who didn’t was the dressage phase winner Lord Ghyvan (27.3) who was withdrawn by Katherine Bennett after picking up eight show jumping penalties.

On his second EI start, Ros Devereux’s unraced Walter Smiddy (27), a six-year-old Watar gelding, recorded an all-the-way success in the EI90 under David Richard. Their nearest rivals at the finish was the 14-year-old Charlie of Blakehill (28.3) who, with rider Eimear Nee, has once again qualified for the Connemara performance championship at next week’s Dublin Horse Show.