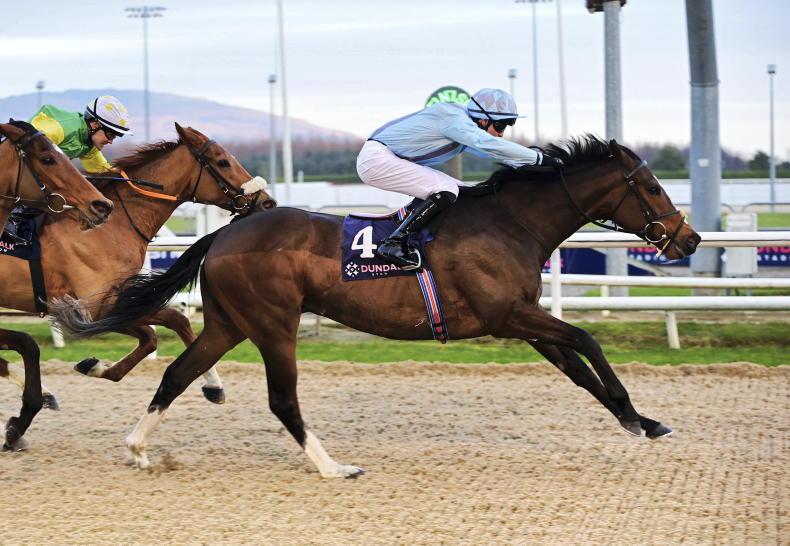 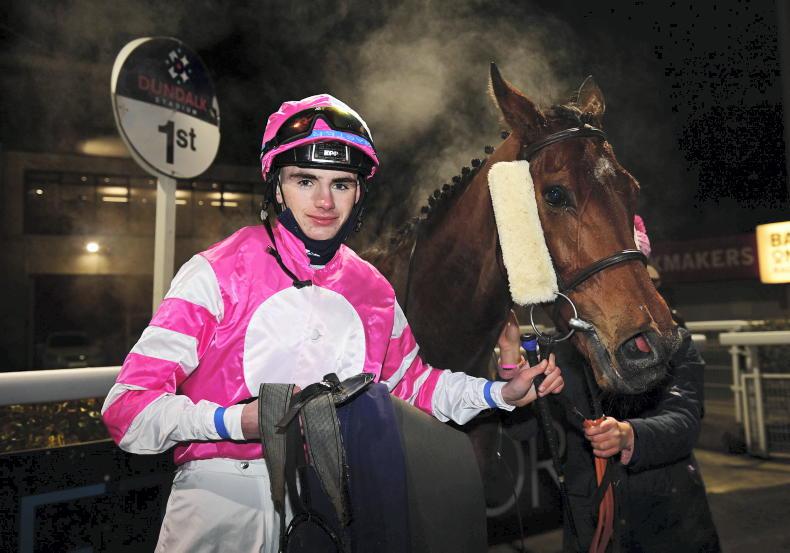 APPRENTICE jockeys Cian Horgan and James Ryan will forever cherish this mid-January fixture as the young riders both registered the first victories.

Firstly to Horgan (18) whose triumph came aboard Joseph O’Brien’s First Blood (7/2) in the two-mile handicap. A son of former leading jump jockey Trevor Horgan and a brother of Hugh Horgan, who has also ridden a number of winners for the O’Brien yard, Cian Horgan judged things to perfection as he made all the running on the Annus Mirabilis Syndicate-owned four-year-old.

On just his sixth career start, the son of Intello dug in grittily in the straight to turn away several challengers and he reached the line with three-quarters of a length to spare.

“I’m very grateful to have gotten the chance from Joseph and the owners. It means an awful lot to me,” reflected the rider.

This Morna McDowell-owned gelding showed a taking will to win when striking on his debut here a month ago and that quality again stood in a race where he was at a considerable disadvantage in experience.

The 100/30 joint-favourite was nicely placed in second for much of the race but in the straight he just didn’t seem to be picking up as well as some of his rivals and he was lying outside the placings heading into the last furlong.

White Marlin responded to Paddy Harnett when it mattered though and finished with a flourish to nail the front running Picpoul on the line. There should be more to come from the winner who was scoring off an opening mark of 80.

James Ryan (17) registered his milestone success on Tom McCourt’s Philly’s Hope (17/2) in the second division of the 45-65 rated mile handicap.

This Flat To The Mat Syndicate-owned five-year-old had run a number of solid races since getting off the mark at Bellewstown last September and Ryan showed polish and poise aplenty in producing her to lead over a furlong before a near three-length success over Miracles In May.

“That’s brilliant. It took time as I’ve had around 50 rides and Tom (McCourt) has been very good to me so it’s great to get off the mark. She didn’t get the clearest of runs last week but she got a lovely run up the inner today and flew home,” declared the rider.

ON a card that served up some great finishes perhaps the best one was supplied by Spirit And Glory (3/1) and Sister Bridget in the three-year-old fillies’ maiden over a mile. This pair, who were third and fourth in a maiden before Christmas, went toe-to-toe over the last furlong and a half and flashed across the line in unison.

Ultimately the photo went the way of Michael Mulvany’s charge. Apprentice Wesley Joyce was on board this Cotai Glory filly who carries the colours of the Get Up And Go Again Syndicate.

“She got the trip well and may even get a little further. She was very green on her first couple of runs and is only learning about things now,” reported the trainer.

A good winter on the Polytrack for Henry de Bromhead’s team continued with Barbapapa (100/30) in the three-year-old colts’ maiden.

A barrier trial winner here in August, the Kenny Haughey winner finished immediately behind Spirit And Glory and Sister Bridget on his previous start and looked all the better for the step up to a mile.

Mark Enright’s mount was in control of this race for much of the straight and he finished three-quarters of a length ahead of the 80/1 chance Brave Troop.

“He’s a fine big horse and I’d say the further he goes the better he’ll get. When he grows into his frame he could be a nice horse,” reflected the winning rider.

Weld off the mark with Belacqua

DERMOT Weld got up and running for 2022 as Lyra Belacqua, in the trainer’s colours and first-time blinkers, claimed a precious winning bracket in the older horses’ maiden over an extended 10 furlongs.

A daughter of Kingman and the Weld-trained Trigo Strakes winner Enchanted Evening, the 9/4 shot lined up with a rating of 58 but had shown enough on several occasions to suggest that she could make her mark.

Under the red-hot Donagh O’Connor, who joined Chris Hayes at the head of the winter standings on the nine-winner mark, Lyra Belacqua was still going nicely when striking the front with over a furlong to run and she went on to defeat the 200/1 chance Is That So by a length and a quarter.

Jimmy Coogan and Dean Curran, who were both successful here the previous week, joined forces to land the seven-furlong apprentice handicap with Kisses Of Fire.

The Diego Dias-owned filly had shown some promise in a couple of Polytrack outings earlier in the winter. She was travelling notably well approaching the last couple of furlongs and, typical of her sire’s (Mehmas) progeny, the 9/1 shot finished off her race in most determined fashion to see off The Pargey Bee by a length and a half.

Kisses Of Fire is due to come under the hammer at the Tattersalls February Sale in less than a fortnight having been picked up for 1,000gns at Newmarket last August.

Adapt To Dan (6/1) turned out fresh from a two-month break to land the first division of the 45-65 rated mile handicap confined to horses who hadn’t been placed last time out. On his fourth outing for Fahey, the experienced six-year-old won well for Danny Sheehy after striking the front with over a furlong to run. The Haven’taclue Syndicate-owned gelding reached the line with just under four lengths to spare for the third success of his career.