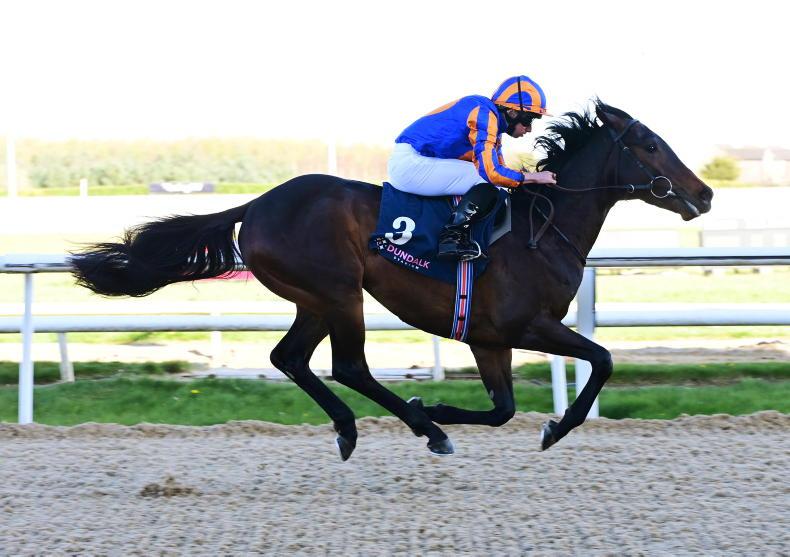 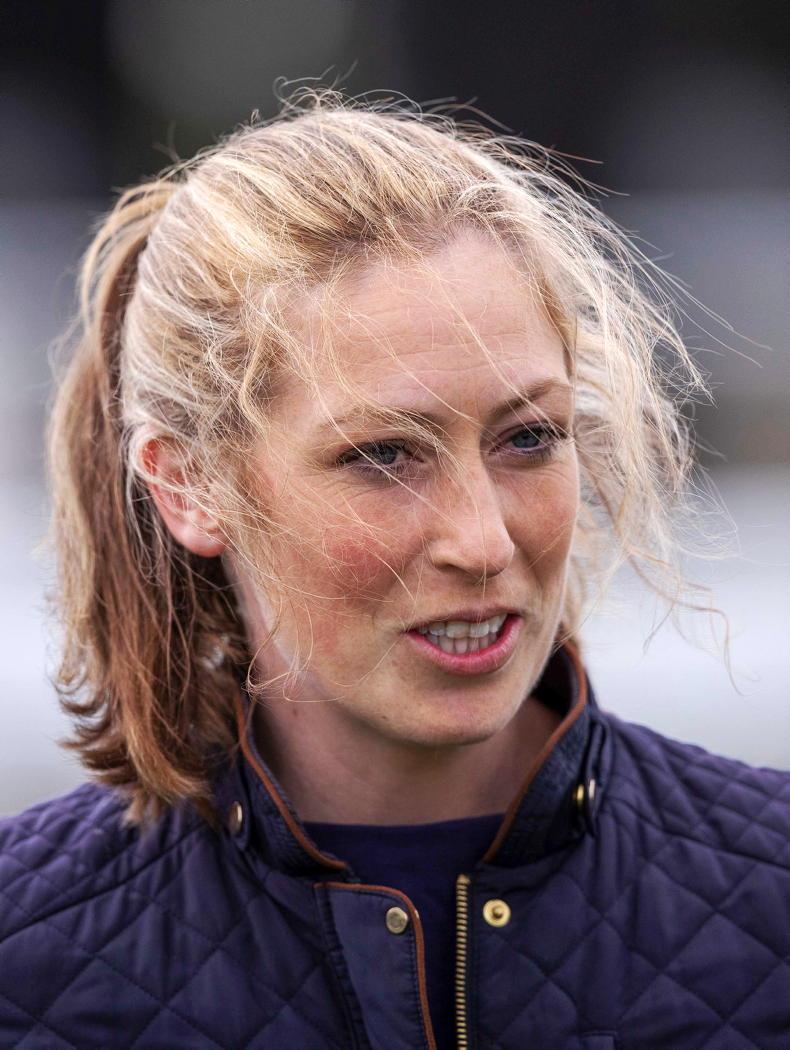 Hilary McLoughlin trained a double at Dundalk \ carolinenorris.ie
Previous Next

AIDAN O’Brien struck an ominous chord for the coming months as his first two-year-old runner of the season was a winner as Blackbeard made a taking start to his career in the Irish Stallion Farms EBF Maiden over five furlongs.

A son of No Nay Never and the former Moyglare Stud Stakes fourth Muirin, Blackbeard (15/8) just had to be niggled along after halfway and he sustained his effort in fine style over the last couple of furlongs.

Blackbeard surged to the front for Ryan Moore with over a furlong to run and the Ballydoyle inmate went to the line with purpose to pull a length and a half clear of the well-backed favourite Alexis Zorba, with the pair six and a half lengths clear of the remainder.

“Aidan said he is a fast horse and he has shown plenty at home. Hopefully he’ll end up in Ascot and he’ll probably go to the Marble Hill on the way,” reported stable representative Chris Armstrong.

Aidan O’Brien and Ryan Moore made it two winners from as many runners on the night as Ivy League (13/8) landed the BetVictor-sponsored maiden over a mile. After a nice debut run at the Curragh on the opening day of the season (sixth to Malex), the Galileo colt didn’t help his chances when veering markedly right with over a furlong to run.

This gave the challenging newcomer Marhaba Ashmayne every chance but when he righted himself, Ivy League, in the Westerberg colours, got home by half a length.

“He’s still a baby and he’s still very green. He has a lot to learn but he will improve from that there and we’ll let him go to a conditions race next,” said Chris Armstrong.

A night to remember in Dundalk

IT was an evening to savour for trainer Hilary McLoughlin as she sent out the first double of her career and her brace was completed by Macadam’s Rock, in the colours of her partner and former jockey Martin Ferris, in the 47-65 rated seven-furlong handicap.

The four-year-old came from well off the pace under a typically well-judged Billy Lee to lead over a furlong out and he reached the line one and three-quarter lengths ahead of Kaswarah.

“It’s brilliant. That’s our first double and only have seven or eight for the flat,” reflected Martin Ferris. “Ryan Moore rode him at the Curragh on the first day of the season and he wasn’t hard on the horse when his chance had gone and he came in and told us to drop him back to seven furlongs and put a tongue-tie on him which we did.”

Andy Slattery was on aboard Hilary McLoughlin’s first winner which came when Evening Verse (13/2) bolted up in the 47-65 rated handicap over a mile and a quarter. This John O’Connor-owned five-year-old has hit a really rich vein of form and was unlucky not to be making it a hat-trick here having lost out by a neck to Dammit at this track late last month. On this occasion, Evening Verse settled this race in a few strides as she cruised into an ever-increasing lead over a furlong from home before eventually reaching the line with six and a half lengths to spare.

“She wasn’t quite right last year and we gave her a couple of spins over hurdles and she probably wasn’t getting home on testing ground,” reported Martin Ferris. “Cheekpieces have turned her inside out and Kevin Manning said don’t be afraid to drop her to this trip when he rode her last time. Only for that I don’t think we’d be here.”

Andy Slattery would go on to enjoy a double of his own when Fiach McHugh, trained by the rider’s father Andy senior, in the Irish Stallion Farms EBF Median Auction Maiden over seven furlongs.

This 84-rated Belardo gelding put together a couple of decent efforts as a juvenile and looks at least as good this year. When Honey Girl skipped a few lengths clear inside the last quarter of a mile, Fiach McHugh looked set for a minor role. To his considerable credit though he raised his effort to come with a telling challenge and he wore down the leader close home to score by half a length for Mrs P. Harney.

“We gelded him over the winter and I thought he would win if he handled the surface,” stated the trainer. “He was never on it before but was working very well the last couple of weeks. He’ll probably go to Naas for a premier handicap for three-year-olds only over a mile towards the end of the month.”

Lynam’s charge has the Power

AFTER winning his maiden here in early November, Collective Power had to endure a frustrating run which yielded five runner-up efforts from his next six outings.

However, Eddie Lynam’s charge bounced back in the 47-65 rated five-furlong handicap where he won with something to spare.

In first-time blinkers, the Sabena Power-owned 3/1 favourite tracked the pace and when Scott McCullagh called on him to raise his effort with over a furlong to run the response was a good one. Collective Power was soon showing in front and he went to the line strongly to post a resounding three and a quarter lengths triumph over Maggie Thunder.

There was something of a turn-up in the BetVictor-sponsored three-year-old mile-and-a-half handicap where Decorated Guest, the joint longest-priced runner in seven-strong field at 14/1, struck for Liam McAteer and Wesley Joyce.

A cracking finish saw five of the runners holding every chance as the last furlong loomed, but this son of Decorated Knight was strongest in the closing stages.

The Patrick Cosgrove-owned light weight got home by three-quarters of a length from Buenaventura and could add to his tally in the coming months.