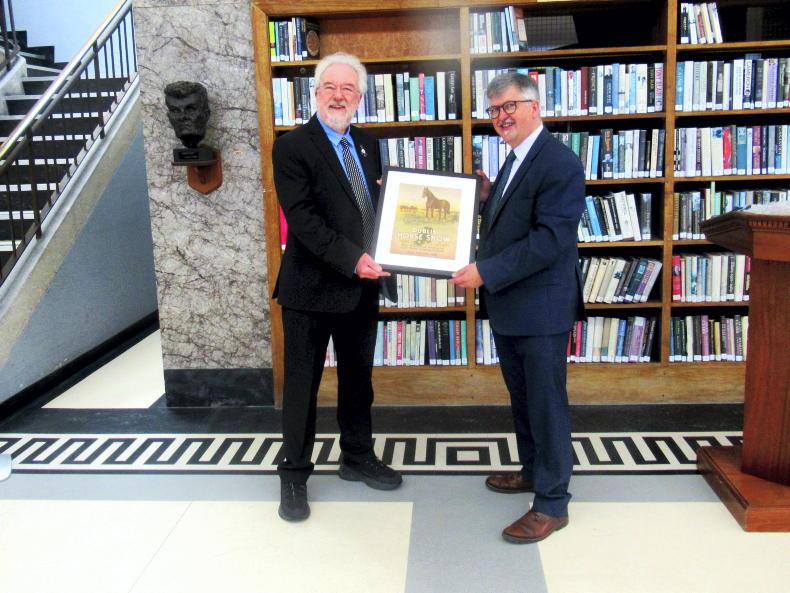 THE curtain fell on the extraordinary 47-year career of Gerard Whelan, well known to many equestrians as the RDS Library and Archives Librarian. Gerard joined the RDS on a three-month work experience programme in 1975 and that was the beginning of a life of dedication to the national treasure that is the RDS Library.He has been to the forefront of all the new initiatives over that period together with the staff and the Library and Archives Committee. Gerard has been particularly active in promoting the open nature of the RDS Library and Archives which contains over 100,000 volumes as well as the Old Dublin Society Archives, many dating back to the foundation of the RDS in 1731. These collections have been of enormous benefit to researchers and authors, which includes a database of Dublin Horse Show photos that have been digitised for easy access.

Gerard was always kind and generous with his time as he is a true ‘people person’, and took such an interest in the projects and books that members and non-members were writing. He would often just show them an old photo and suggest that it would be interesting to write a piece, and encourage you to look into it.

I remember he showed me a photo taken in 1868 of Richard Flynn from Co Roscommon and his horse Shaun Rhue a few years ago. They were the winners of the first Dublin Horse Show show jumping competition (known as a leaping competition) in that same year, and that set me off researching and eventually publishing my book, The Dublin Horse Show.

Gerard would always make himself available for visitors from home and abroad. When I was arranging a visit for American showjumpers Michael Matz and his wife DD, both of whom were on the winning US Team in the 1993 Aga Khan Nations Cup, Gerard, aside from showing them a display of Nations Cup memorabilia, produced a poster from that year and presented it to the delighted couple. When I visited them in their home in Pennsylvania afterwards they had the poster hanging proudly on their sitting room wall.

Author, journalist, historian and former RTE show jumping and eventing correspondent Michael Slavin was rich in his praise for Gerard who saved that extremely rare old 1868 photo of Richard Flynn for posterity as it was about to be disposed of with other papers. He described Gerard as follows, ‘If you were looking for an item that you were convinced that you probably would never find, you just asked Gerard, and he would usually find it and come back quickly to you. He was incredibly dedicated, interested and utterly efficient’.

Barrister, historian and RDS Committee member John Holohan commented: ‘Gerard’s contribution to the RDS Library has been immense as he has such a close knowledge of the books lodged in the Library. He has a broad base of interests ranging from history, literature, arts, philosophy, science, biography, equestrian and many more subjects. His particular contribution to The Library Speaker Series was notable in selecting subjects and speakers an area where I had a role to play on the Committee. Gerard organised numerous Library Exhibitions on a great variety of subjects and closely supervised them.’

Gerard was a shrewd collector and preserver of old manuscripts and photos that was relevant to the Library Collections. Many collections were donated to the Library during his term in office, and people would regularly call into him with material that otherwise would probably be lost, as they knew that he would see the value in it and would even more importantly have a person in mind to work on it. He also perused auction catalogues, and if an item of interest came up either the Library would buy it, or a member or group of members would contribute to purchasing it.

Every month the Library features displays with memorabilia from the Archives such as the centenary of James Joyce’s Ulysses, authors such as Maria Edgeworth, scientific breakthroughs, and displays on the environment, arts and any topical literally event of that month.

Each year equestrians look forward to the featured equestrian exhibition during Horse Show Week which is a window into the rich history of the Show. Recent Library Exhibitions included ‘The Story of the Dublin Horse Show’, and others such as ‘The History of the Aga Khan Cup’ from its inception in 1928, ‘The Army Equitation School’, ‘A Century of Women Showjumping at the Dublin Horse Show’, and the lives of equestrian personalities such as Tommy Brennan, Iris Kellett, and The Hume Dudgeon Family to name but just a few.

The Speaker Series has been an outstanding success and has attracted high profile speakers most of whom have publications to their credit. And it is diverse in the subject matter as it adheres to the main pillars of the RDS, namely, Agriculture, Arts, Industry, Science and Equestrianism.

Just some of the book launches in the RDS Library were Michael Slavin and Louise Parkes’ Ambassadors on Horseback and Irish Showjumping Legends as well as Joe McGowan’s Clearing the Hurdles and many more.

In recent years videos have been made of many of the exhibitions and Speaker Series usually narrated by the distinctive voice of Michael Slavin. I had the great pleasure, at Gerard’s invitation, of using their onsite fully equipped recording studio to make a documentary titled, My Dublin Horse Show which was drawn from memories from the time I attended my first Show in the early 1950s.

A presentation was made to Gerard in the RDS Library which was attended by many of Gerard’s colleagues and friends when a framed 1950 Dublin Horse Show print, illustrated by Olive Whitmore, was presented by the President of the RDS Professor J. Owen Lewis.

Gerard Whelan will be missed by his many work colleagues, friends and active users of the RDS Library. He has plans to live in The Netherlands where his wife Ineke hails from, and I understand that Gerard plans to write a book on one of the collections in the RDS Archives.

We, at The Irish Field, wish Gerard and Ineke every good health and happiness in the next phase of their lives, and thank him for all he had done for Irish literature, the equestrian world and saving for future generations so much important written and photographic material that otherwise would be lost.