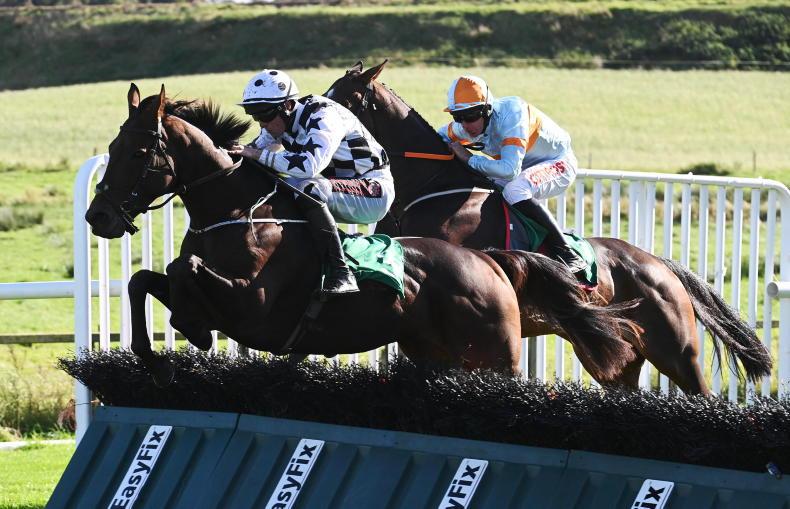 JOHN McConnell wrapped up a fine few months at Downpatrick by sending out No Trouble (11/2) to land the McGrady Financial Services Rated Novice Hurdle which made it 60 winners in 2022 for the trainer.

A reliable sort who has only finished out of the frame once in five previous starts over jumps this season, No Trouble was giving his trainer his seventh winner of the season at Downpatrick.

The in-form Kieran Buckley produced the Cathal McGuckin-owned gelding to head Nonbinding after the last and No Trouble kept on well to finish four and a half lengths ahead of Prince Zaltar.

“Kieran rode for me at the November meeting last year in Cheltenham. He has a good brain and is a really good horseman. There was a gap in the market here and he has come over and he is making the most of it,” stated McConnell.

“No Trouble has been running pretty consistently over hurdles and has a turn of foot at this level. He is ground dependent and wouldn’t want it any softer than that.”

Money Heist was an odds-on favourite to give Buckley a double in the 80-95 rated handicap hurdle over just short of two and three quarter miles but he could only manage fifth behind the Charles O’Brien-trained Appian Way (4/1).

Jack Foley was on board this Painestown Syndicate-owned six-year-old when he won at Clonmel last week and he took the mount once more. From a long way out the outcome of this race rested between just Appian Way and L’or Des Roses and the former was much the stronger in the closing stages as he surged clear to score by 25 lengths.

The final race of the year at Downpatrick served up a tremendous finish where the Michael Hourigan-trained Sanibel Island followed up last weekend’s Killarney triumph in the 0-95 rate handicap chase over just short of three miles.

In a titanic finale, the Darragh O’Keeffe-ridden Sanibel Island (10/3), in the colours of the trainer’s wife Ann, edged out Walking The Walk by a nose.

More up north for Mullins

WILLIE Mullins was another trainer to enhance his fine course record as Inclusion become his fifth winner of the season at Downpatrick from just 12 runners with a last gasp triumph in the I.N.H. Stallion Owners EBF Maiden Hurdle over just short of two and three quarter miles.

This James and Jean Potter-owned mare lined up off a second to She Is Electric at Ballinrobe last month and looked all the better in light of the latter’s subsequent listed success at Gowran last week.

Fellow 9/4 joint favourite Sams Choice looked to hold the upper hand when he moved to the head of the field at the last flight but on the arduous climb to the line he had to give best to the Kieran Callaghan-ridden Inclusion who got home by half a length.

A fine run for J.J. Slevin continued into the opener as the rider struck aboard Rodney Bay in the Racing TV Maiden Hurdle over two and a quarter miles.

A rating of 110 and a number of solid recent efforts in defeat meant that the 15/8 favourite set a decent standard for this contest and with two to jump the Lisa Sheridan and Larry Murray-owned gelding moved to the head of the field.

Rodney Bay then lost the lead to Duleek Street after the last but he rallied well to regain the advantage on the climb to the line and carried the day by three-parts of a length.

EASILY the most popular success of the day came when the veteran Antrim trainer Harry Smyth, who has been training for 40 years but indicated that he may soon call time on his career as he nears 86 years of age, sent out his own Willyouwalkwithme (12/1) to land the 80-102 rated Roadstud Installations Handicap Hurdle.

Now a triple course winner, the Smyth-owned seven-year-old was ridden by Shane O’Callaghan and was one of very few to get into this race as the front-running Single Edition had most of his rivals in trouble a long way from home.

Clonbury Bridge, whose last win came in a handicap hurdle at the 2021 Galway Festival, progressed from an encouraging second at Sligo last month to claim the C Russell Auto Sales Beginners Chase over just short of two and a half miles.

The Philip Dempsey inmate was sent off the 5/2 favourite for a race confined to horses rated 109 or less over hurdles and he improved to dispute the lead with Winding River at the penultimate fence.

The latter was very awkward at the last obstacle which handed all the initiative to Luke Dempsey’s mount who went on to prevail by a full length and a quarter from a brave Winding River.