Title: CURRAGH SATURDAY: Luxembourg should have the class to win

Ryan McElligott makes his selections on the Curragh racecard 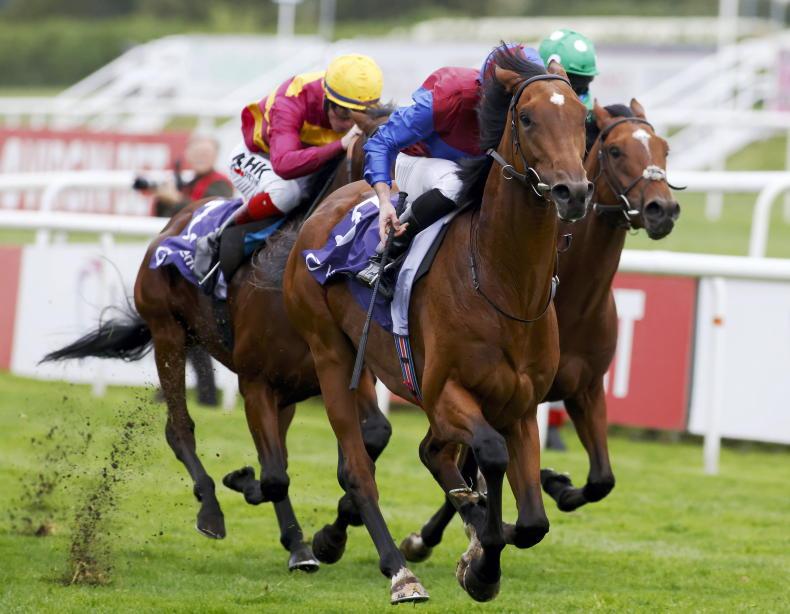 There isn’t a great deal of form to go on here and possibly one of the newcomers will prevail with Pop Star an obvious contender. The Ballydoyle newcomer is a son of freshman sire Sioux Nation and out of a useful mare whose progeny are headed by the exciting and potentially top-drawer sprinter Royal Aclaim.

Sioux Spirit made a solid start to her career with a fourth to the very smart-looking Easy at Cork last week. The form of that race has already worked out to an extent, so she looks capable of getting involved off the back of that encouraging first run.

Ocean Jewel is a fascinating newcomer as a Sioux Nation half-sister to the top-class Mother Earth.

Meggy Moo is a hopeful choice. She has progressed steadily with racing and her last two runs appear to give her live prospects of getting involved.

The first of those saw her finish a respectable fifth to Apache Outlaw in a Fairyhouse maiden, and she showed up well to take fourth behind Montesilvano at Leopardstown last month. An initial rating of 68 gives her a solid chance of making her mark.

She is preferred to Lasmuigh who showed up well in the first nursery of the season when beaten just a neck by All Things Nice. He went up 4lb for that run but should still be very competitive. The top-weight, Reinforce, is another likely contender.

This could see Majestic Colt register his first success on Irish soil. He has dropped 17lb in the weights since the start of the season and his last two runs would suggest he is getting back to a competitive mark. In particular his penultimate fourth to Mr Wagyu in the Scurry Handicap was a fine run and entitles him to go close.

Goodnight Girl was just a place behind the selection in the Scurry and she is a former course and distance winner. A good showing from her would not surprise.

Prisoner’s Dilemma comes here in good shape and warrants more than a passing mention as he is taking a fairly significant drop in class for this.

Harry Time might be able to avail of a drop in class. A debut winner at Navan, he wasn’t disgraced in the Coventry Stakes next time and last time out ran a respectable fourth to Persian Force in the Group 2 July Stakes at Newmarket. He will find this easier and the drop back to 5f shouldn’t be an issue for him.

Mauiewowie looked a high-class juvenile when making a winning debut at Naas last month. She was then beaten back at that track several weeks later when stepping up to listed level but still ran a respectable second to Lady Hollywood. There should be more to come from her.

Badb is respected but has to bounce back from a below-par showing in last week’s Ballyhane Stakes.

The eagerly awaited return of Luxembourg represents a fascinating focal point for the latest edition of this race. Last year’s star juvenile made a fine start to his season when taking third in the 2000 Guineas where he finished well from off the pace to be beaten just over 2l.

That represented an excellent effort from a horse who should be quite at home tackling longer trips and this distance looks ideal for him. He will need this run and will be vulnerable, but even so he should have too much class for these opponents.

Insinuendo hasn’t run since chasing home Mother Earth in the Park Express Stakes on the opening day of the season, so she has an even longer absence to overcome than the selection. She is a classy filly who looks the foremost threat to Luxembourg.

Raise You can continue his progression. Since moving up to 1m 4f he has taken his form to a new level. He was an impressive winner of a listed race here in May and followed up with a fine second to Earl Of Tyrone in another stakes race at Limerick the following month when he didn’t enjoy the best of runs at a vital stage. He has to prove his stamina at this trip but if that holds up, he should win.

It wouldn’t shock if he had most to fear from his stablemate Temple Of Artemis who won a 1m 4f handicap at Chester for Aidan O’Brien on his most recent start 100 days ago.

Before that he shaped up nicely when taking third in a Leopardstown maiden won by Boundless Ocean. He remains a colt of considerable interest.

Next best: Temple Of Artemis

His last few runs would suggest that Reverberation could be on the cusp of another success and his appeal is further heightened as he has the notable assistance of Dylan Browne McMonagle. The seven-year-old was third to Mads Black Eights in a Leopardstown handicap last week having previously finished a close up fifth in another 1m 1f handicap at that track. Both of those runs will see him closely involved in a race where he is taking on a number of out-of-form rivals.

The Pargey Bee has been running well all season and won at Bellewstown on his penultimate start. He looks a likely contender.

Next best: The Pargey Bee

Shabaaby has lots of weight to carry but this is partly negated by Joey Sheridan’s 3lbs claim. The selection struggled in a premier handicap at Cork last time but is back in a more suitable grade. His previous efforts yielded a second in a sprint handicap at Down Royal before he won over 5f at Bellewstown at the end of June.

Back at this level he makes plenty of appeal and can see off Ducky Mallon who made a tremendous return from close to two years off when second to Gegenpressing in a handicap at Sligo last week. If the 11-year-old can repeat those heroics he should be able to make his precent felt.

Ever Rock, who was third in that Sligo race, is another to note along with Royal Tribute.