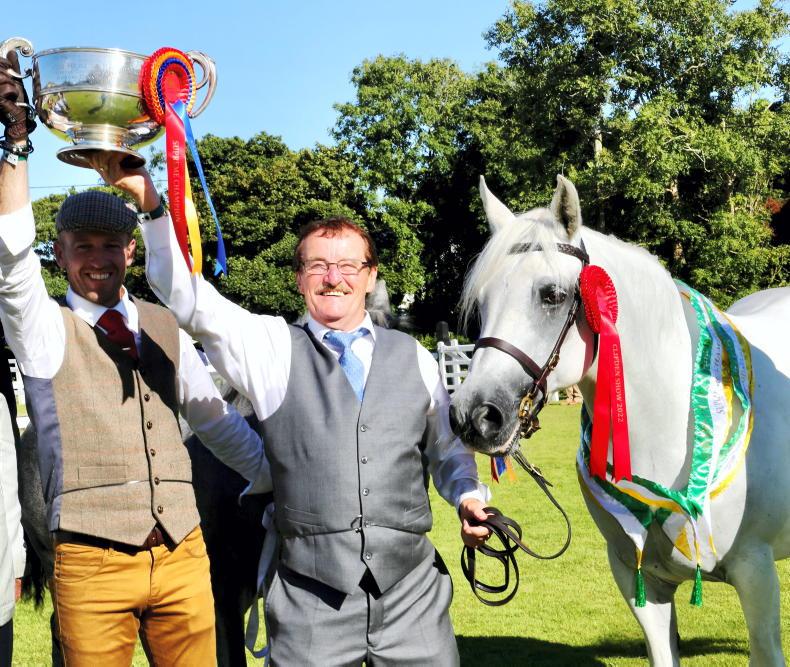 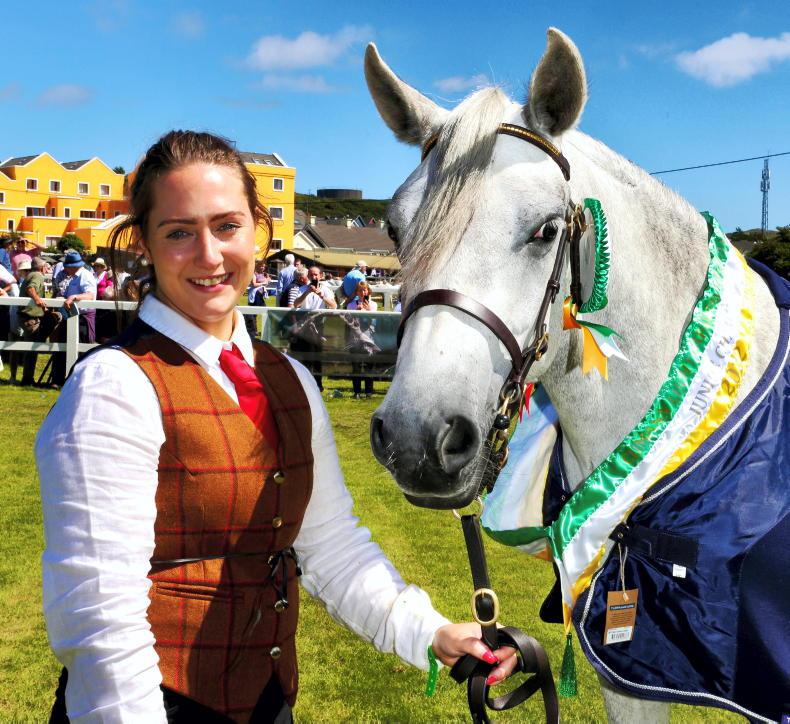 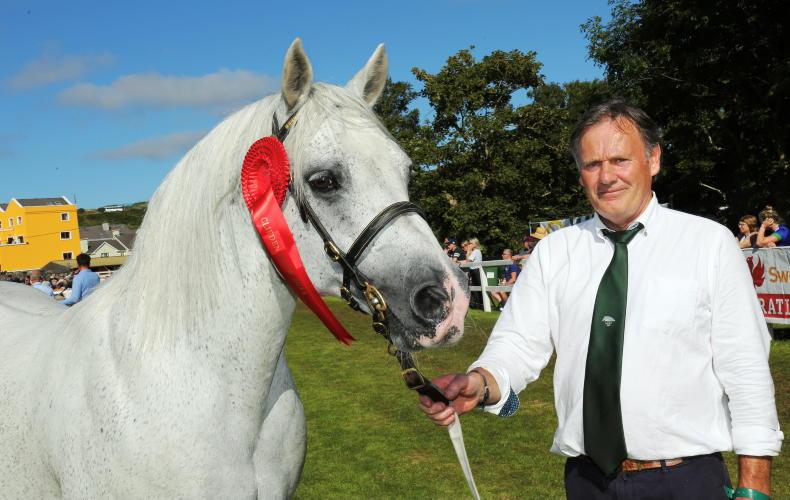 Terence Sweeney and his Dunloughan Troy, winner of the seven-year-old and over stallion class at the Clifden Show \ Susan Finnerty
Previous Next

That first Clifden red is a milestone for many Connemara owners and the two youngest exhibitors to add their names to that hallowed list are Joseph McCann and Edel Nee, winners of this year’s young handler classes.

Robbie Fallon must feel like a dual gold Olympian so, following the supreme champion title for the home-bred Cashelbay Kate, owned by his wife Barbara. In what is believed to be a first-time double, Fallon also won the ridden championship 24 hours later with another home-bred: Cashelbay Rocket.

Cashelbay Kate’s place in the Horse Sport Ireland supreme championship was first earned by her win in the 10 to 15-year-old mare class. She followed up with the Willows Ingredients broodmare title, when all eligible supreme championship contenders were already gathered and waiting around the arena’s perimeter on a swelteringly hot afternoon.

Even better was to follow for Fallon when Kate, with her Aniar Cashel foal, led by Michael Harty, was announced as this year’s supreme champion. And a home-bred supreme champion too for good measure, as is her sire Cashelbay Prince. He’s by I Love You Melody, a recent loss for Jimmy Canavan and out of Coosheen Pheasant (Callowfeenish Mairtin).

Cashelbay Kate was produced at Fallon’s Athenry base during the three-year lease of her Hazy Match dam, the Danish-bred Fredriksminde Matilda.

Close on Kate’s heels for both the broodmare and supreme honours was Henry O’Toole’s Castle Charm, winner of the six to nine-year-old mare class. Another home-bred success story, the Glencarrig Knight daughter came close to emulating the supreme titles of both her sire (2014) and dam Castle Urchin, who won the Clifden supreme championship twice in 2002 and again in 2007, when she was shown by a young Michael O’Toole who led Charm on this occasion.

The now 24-year-old Castle Urchin produced a filly foal this year so the line continues at O’Toole’s Castle Connemara Ponies on the Sky Road in Clifden.

This year’s foal champion was Cathy Snow and Martin Coyne’s Moorland Snowdrift, the fifth time in recent years that Moorland foals have featured in the Clifden championship. By Lucky Drift, this filly is a full-sister to Moorland My Oh My, a good winner this summer, and both are out of the current All Broodmare champion Kilpatrick Snowdrop, herself a Clifden winner.

It has been quite a summer for the family with daughter Camilla on the successful Irish teams at the young breeder world championships in Ermelo. Cathy’s mother Bridget, along with the Banner County’s James O’Donoghue, were both presented last week with the CPBS Hall of Fame awards.

Cathy also reports that Park Snowy Henry, the three-year-old gelding donated by the Connemara National Park, made €5,300 at the Clifden sale last Sunday with the proceeds going to the Connemara Therapeutic Riding charity (see sales report on page 98).

Coosheen Stormboy features twice in the youngstock championship story as he appears in the back pedigree of Loughwell Lara.

She was bought as a foal at Maam Cross fair by another Hall of Fame recipient, the late Jarlath Grogan, for his granddaughter Rachael Byrne.

Bitten by the showing bug, the Equine Business graduate from Kilconly had her first Clifden title win, courtesy of the two-year-old Cregduff Manor (Manor Duke), bred by Michael O’Malley in the Lee Family youngstock championship. Rachel, who also helps out on her father’s beef suckler and sheep farm, won the Diamonds Equine Renvyle best handler award too.

The reserve youngstock champion was Cathal Mullen’s Gurteen Bruno, another home-bred and by Coosheen Stormboy out of the Glencarrig Knight mare Gurteen Jennifer, the champion foal here back in 2014 for the Roundstone family.

Clifden’s three stallion classes are always hugely popular and this year’s winners were Terence Sweeney’s Dunloughan Troy (Currachmore Cashel) from the seven-year-old and over section; Ciaran McGrath’s bay Goureemore Silver Shadow, by his namesake sire and bred by Swiss lady Anina Tanno in Bantry, from the four to six-year-olds and Eamon Burke’s latest addition to the stallion ranks: the three-year-old Manor Marble (Manor Duke), bred by Noel Noonan.

Perhaps an overall stallion championship would be a possibility for future shows as the CPBS gears up for its centenary year celebrations in 2023.

Terence Sweeney and his Dunloughan Troy, winner of the seven-year-old and over stallion class at the Clifden Show \ Susan Finnerty

“I came in here at 12 years of age to the show, I’d seen bits and pieces to be done and you know how a young lad would be willing, so I started to help out. The night before the show, we used to fence the river that came through it [show field]. I lived in Cashel and you could see the Carna road from our house. The night before Clifden, you’d see the men coming up that road, walking their mare and foal. When you’d come into the show the next day, the foals would be stretched out and the mares standing over them.” - Mairtín Nee describes the 42-mile pilgrimage made by exhibitors and how he got involved with helping at Clifden Show.

“This has been the best week of my lifetime, second only to my wife Barbara and our four children. And for it to happen in the famous Clifden Show, my home ground in Connemara, where I was born and raised. My heart always lies there.” - Robbie Fallon.

“We are satisfied that Wednesday’s in-hand programme was successful and that it worked very well and we had large groups of people of equal proportion in both rings. One thing that is carved in stone is that our show next year will be held in the third week in August, that has been ratified at Council.” - Dave Sheedy, CPBS president.

“My nephew Cormac Connolly, who died at 24 of a brain tumor, himself and Joe Burke were inseparable, they were first cousins. He loved Connemara ponies and hurling, those were Cormac’s two great passions. He’d have a great laugh if he found out I was doing the official opening at Clifden!” - Galway hurling legend Joe Connolly.

RESULTS ROUND-UP, NOVEMBER 17th 2018
A comprehensive round-up of the week's results from all over Ireland 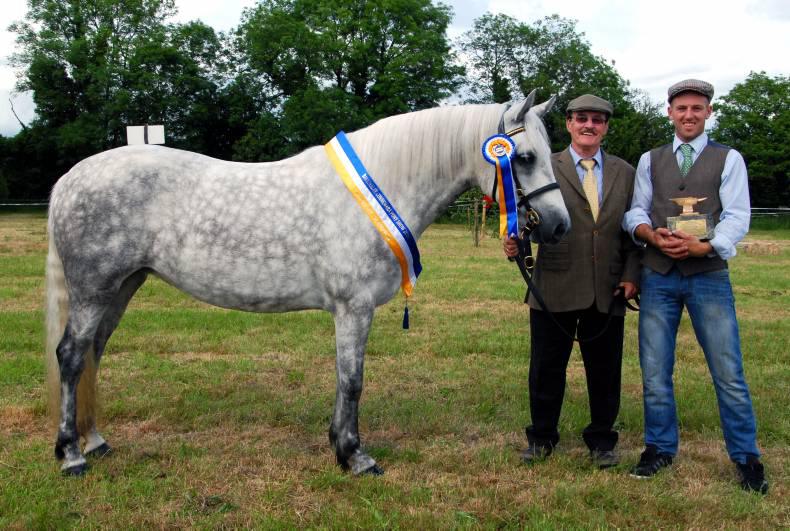 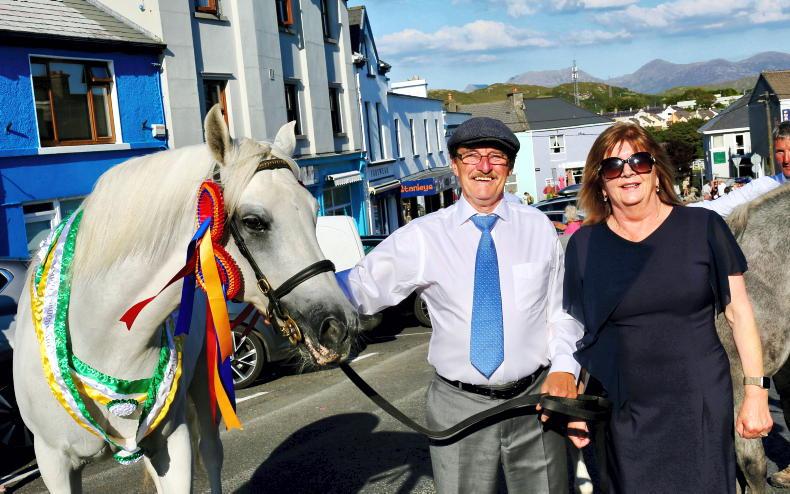 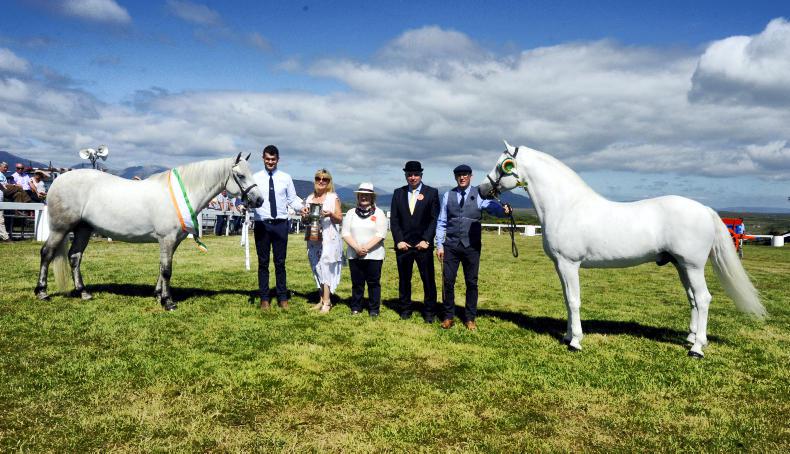 AROUND THE COUNTRY: O’Toole turns on the Charm in Roundstone
Henry O’Toole four-year-old mare Castle Charm was crowned the supreme champion at Roundstone Pony Show