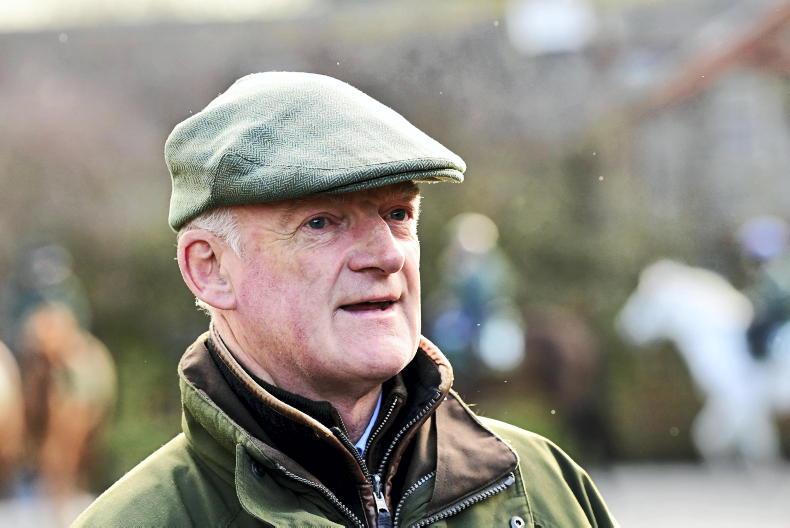 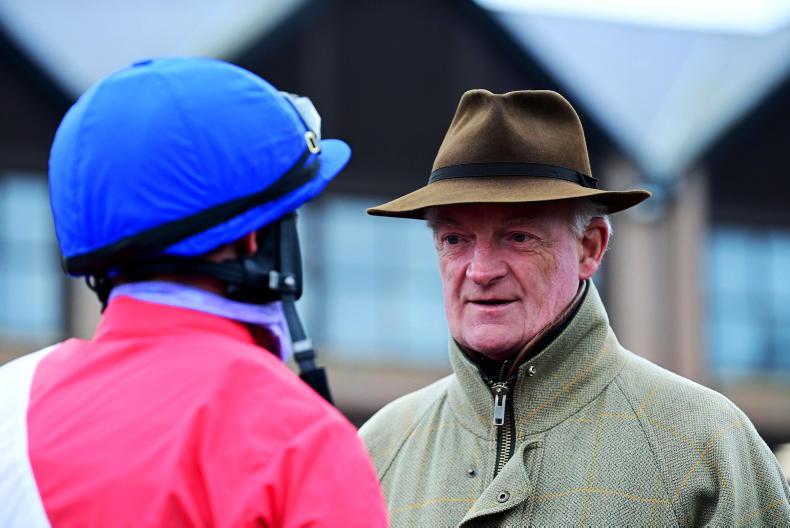 Willie gets the debrief from Paul Townend \ Healy Racing 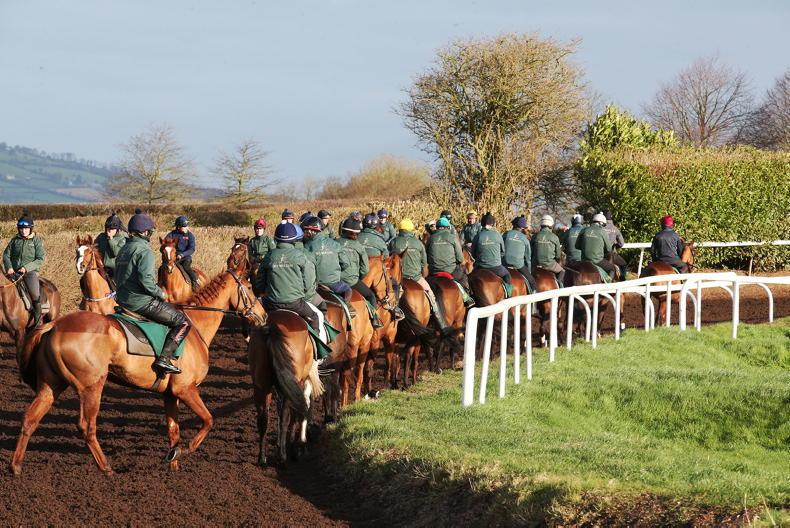 AROUND this time four years ago, the week after the curtain had come down on the Cheltenham Festival, Aidan O’Brien hosted a press event to mark the launch of the Irish flat season.

During the morning, those in attendance saw various pieces of technology being used, including heart monitors and GPSs, and the subsequent results, which were also transmitted in real time back to the phones of John Magnier and his fellow Coolmore partners, whatever part of the world they might be in.

O’Brien extolled the virtues of having all the information but when asked, happily admitted that decisions he made ultimately came down to instinct; based on what he could see.

“Can you teach a computer gut feeling?” he asked rhetorically.

Like the Ballydoyle maestro, Willie Mullins is all about the instinct, which in truth, is more about experience.

There is an innate talent no doubt, a sixth sense, but would he have been able to do it had he grown up in a city-dwelling family of financiers rather than in Doninga as the son of Paddy and Maureen, witness to genius and to the ebbs and flows of a equine life?

Not impossible, but less likely. The same applies to O’Brien, who learned about horses and general animal husbandry on the home farm, and then picked up loads about training them to race as an assistant to Jim Bolger – just as Mullins did for a year.

O’Brien and Mullins might never be able to identify what knowledge they are drawing on all the time when making a decision but it is knowledge. Knowing what is right. What works. And gathering information to feed that, with the opinions of first jockey Paul Townend, son and assistant Patrick, as well as right-hand men and former Closutton pilots David Case and Ruby Walsh canvassed, among others.

“Looking at them in the morning,” explains Mullins. “That’s why I like to be here every morning, to see them. You’ll see if a horse is improving or disimproving to look at.

“Then the staff know what the horse has done over the previous two or three weeks, or they should, and how they’re repeating and so on. So if I’m worried, I just ask them to confirm or deny whatever I’m thinking.

“Then we make up our mind. Normally, if I’m worried, we change something. If the horse has run bad, we might change the way we work them afterwards. You talk to David, Patrick and Ruby. There’s all the feedback from Paul and the jockeys.

“We try to keep the same riders to the same horses so that they know the horses as well if not better than I do. They’re part of the training. I’m just looking at the horses as I see them.

“Sometimes I just have my own mind made up about a horse. I’ll still listen to everyone but then I’ll say, ‘No, let’s just go this way.’ But I do listen, especially if someone comes up with a good reason why it could be better to go in a certain direction… And of course before we get to that, we’d have had three months of other conditioning work put into them.

“It’s an ongoing process rather than just stamping ‘two big’ on their thing every morning!”

‘Two big’, is the most common instruction in the mornings, meaning two laps of the big gallop.

You do hear of trainers taking notes and regularly referring to them to get the juices flowing, but not Mullins. He tries to remember everything but you sense that the information is inputted in the brain and without necessarily remembering who provided it, the circumstances, or maybe even the information itself, it forms part of the cocktail from which the final verdict emanates.

The 78 Cheltenham Festival triumphs, 15 champion trainer titles, 303 Grade 1 winners, and (give or take a few here or there that a very quick totting up undoubtedly missed) around 3,723 winners worldwide since taking out a licence in 1988 tell you that it works.

It seems obvious but while horses aren’t people, you do have to treat them as individuals. That is the challenge. If there was one-size-fits-all formula, I could train a horse. But because they cannot tell you, you have to read the signs and the distinctions. It’s just like horses sweating up before a race.

When we see it regularly in a horse and it performs well, we know it is that right kind of excitement a sportsperson gets before competing. When it occurs and the horse underperforms, we know it has left its race in the dressing room as it were, the tension and stress having turned the legs to lead and resulted in a flat performance.

When Hedgehunter looked healthy, he didn’t run well. When he won the Grand National, “he looked like a greyhound… like he’d need three months in the field”.

“Watch out!” he roars as someone is about to walk onto the gallop to get to the rest of the group on the grass mound inside.

He tells the story of his nephew Danny almost burying him in the deep Closutton wood chip, despite it being wide enough for eight horses to canter abreast on.

“When I cross the gallop every morning, even if I was here on my own, I treat it like the road. Look right and look left, look right again even. Look both ways because what happens – I’m normally late – but there’s always someone later than me!

“Danny Mullins said to me one day, he was doing a bit of work and I was coming down there – only Danny would say it. He nearly wiped me out. Before I could give out to him, he said, ‘I’ll get you the next time!’ What could you say to that?”

There’s always time for some mirth within the serious business. It’s good for any environment. Tony and Mags’ young fella, when he isn’t booting home winners at all levels for any number of grateful trainers, doubles up as one of the quickest draws on the planet with his witticisms.

When Mullins agrees that this must be one of his strongest teams ever making the annual cross-channel pilgrimage to the nirvana of National Hunt, you have to take note.

“What I like about it is we have bits of quality coming through the novice ranks again, and the bumper horses. You’re always worried if your bumpers horses aren’t good, where are you going to get the next generation of novices.”

There is a lesson there. As Cork hurling has found in the past 15 years and Kerry football in the wake of the Mick O’Dwyer era, not planning for the future at the height of success is a recipe for a period in the doldrums.

You cannot presume it will keep coming because it always has. You must make sure it does. That applies now, more than ever, with the opposition operating on a higher professional plane than before.

Mullins is no Luddite, old-fashioned in thinking and action. He is in this business to win and so when a view he has previously held proves contrary to that core raison d’être, that view changes. His increasing use of headgear is one example.

Then there is consistent improvement of facilities and the ongoing recruitment of quality horses. The sourcing of moneyed owners willing to buy them and fund their training careers goes hand-in-hand with that. Despite all he has done, the appetite for success remains insatiable.

By and large though, he restricts the use of computers to making entries and declarations. What occurs in the office in the minutes and seconds before those deadlines has earned mythical status, with 180-degree swivel from commonly held belief potentially around every corner.

Danny put it best when he said that it was only when you were on the back of a horse going down to the start that you know for sure where it was headed.

“It’s mental,” is Mullins’ reply when I ask him about it, though he does profess to sometimes being amazed by the surprise often expressed by media observers, who might label a decision he considers obvious and logical to have been delivered from the left field.

With the numbers he deals with, there are plenty to made. Starting with the Festival opener, the Supreme Novices’ Hurdle, which has the potential to be the race of the meeting.

With two strong contenders in Sir Gerhard and Dysart Dynamo, the call must be made as to whether both will participate, or one will be rerouted to the Ballymore on Wednesday. And if the latter, which one that will be.

“I’ve a fair idea what I’m gonna do but I wanna see how they work and I wanna chat to Paul. And I don’t want to chat to him too soon. And I want to chat to David, Patrick, Ruby – their input will be huge as well. I always think it’ll be a great problem to have the morning of declarations. And we’ll leave it till that.

“The last few years have been better as I have more of a team around me, whereas one time it was just me and Ruby. It’s a bit quicker now. We declare a lot earlier nowadays. It’s not as bad as it used to be.

“It’s probably just a gut feeling I get. Some years I made the right decision and then other years I wonder if I made the wrong decision. You can only go with your own gut feeling or whoever puts up the biggest argument in the place.” 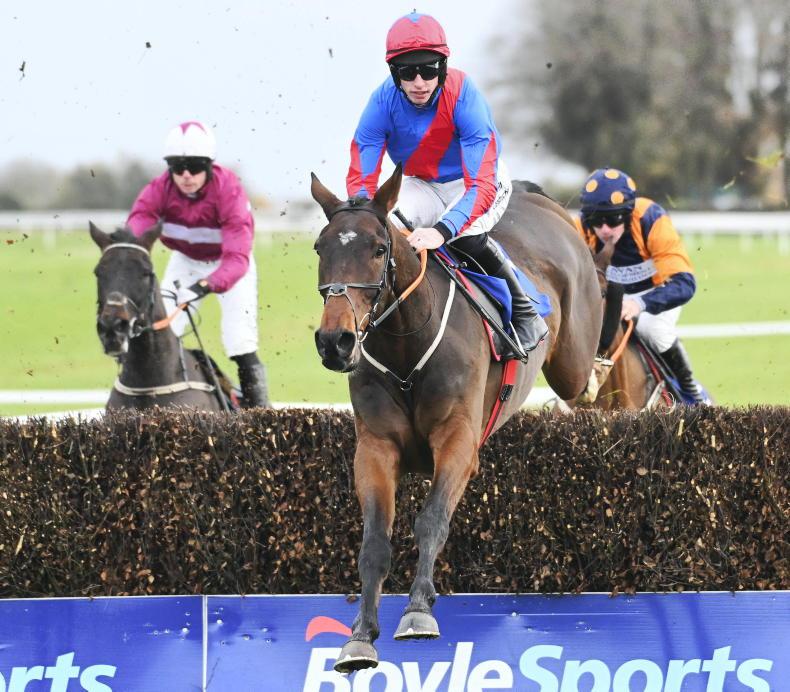 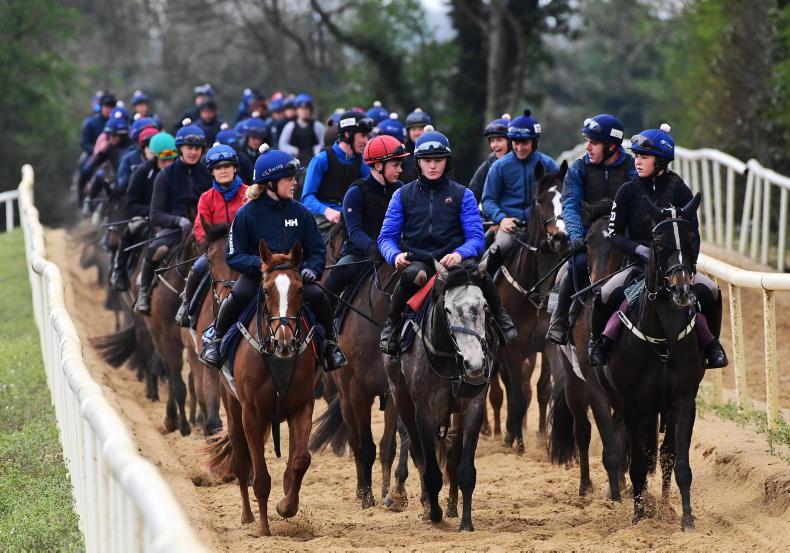 Anne Marie Duff
THE WEEK THAT WAS: Elliott needs stand out season?
The Elliott yard is in fine form, a constant run of young horses are appearing, but they still need to make the grade