Margie McLoone reports from the breeding and youngstock sale at Cavan 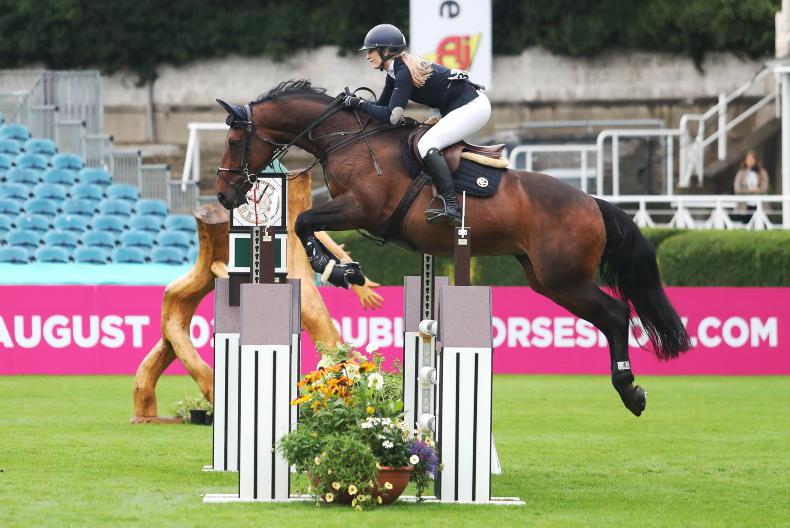 Bellegrove Prima Donna, winner of the Amateur National Championship in Dublin this summer, was the dam of Lot 235, a colt foal by Air Jordan who was sold for €6,200 \ Rolf Stenberg Jumpinaction.net

LAST Thursday’s sale of sport horse breeding stock and youngstock at Cavan may not have produced the same trade as the previous day’s performance auction but there was still a healthy increase all round from last year’s comparative figures.

The Kinnity, Co Offaly-based Carroll brothers, Ray and Aidan, paid the day’s top-price of €7,600 for the Dutch Warmblood mare Melanie (Lot 179) who was consigned to the sale by Lukasz Skorupa. The four-year-old, who bred a colt foal in the spring and is scanned in foal to Comme Il Faut, is by I’m Special de Muze out of Dakota H, by Diarado.

“I thought we would have to pay a lot more for her as she is from an emerging dam line,” said Ray Carroll who was bidding on-line. “She’s a nice type, moves well, has a good page and is in foal to a good sire; you can’t ask for more. She caught my eye when I was glancing through the catalogue and then, having contacted Lukasz, I saw a video of her foal which helped make up my mind.”

Polish native Skorupa, who has been living in Ireland for about 18 years, is based in Ennis, Co Clare where he specialises in breaking and producing young horses for show jumping under the banner Equine Performance Solution.

“It’s important for me that the horses I purchase are very well bred as Melanie is,” Lukasz told the Irish Horse World. “I bought her abroad as a yearling and the plan was to produce her like my other horses. However, because of Covid and the pandemic situation last year, I decided to put her in foal which turned out to be a great idea as she had a fabulous colt by Cornet Obolensky. I’m happy for Ray Carroll as the new owner of this special mare and I hope she’ll be lucky for him.”

Valerie Desrues’s Tetris M’Aurea, who came up as Lot 242 in the Winter Foals selection, was knocked down for €7,200 to Jim Derwin.

The grey colt by Take A Chance On Me Z comes from the family of Shana de Kerglenn (1.60m), Quito de Kerglenn (1.60m) and Jumpy de Kreisker (1.55m), etc. He was one of two foals catalogued in the sale bred from the Cassini II mare Baccara de Kerglenn who has already produced the useful six-year-olds Fashion d’Ael and Faustine de Kerglenn. The second foal, Vitalis M’Aurea (Lot 220), a colt by Vivant, was an absentee.

On a relatively quiet day for the Athlone dealer, Derwin signed for just one other lot during this session when giving €6,000 for Co Galway breeder Anna Bobel’s Rock Star RF (Lot 247), an Irish Sport Horse colt by the Belgian Warmblood stallion Rock’n Roll Ter Putte. The bay is out of the Oldenburg mare Lucie, a Landor S half-sister to the Ephebe For Ever La Silla mare On The Point Eve (1.60m).

Co Laois breeder Gillian Blanche received €6,200 from Craigavon’s Ronald Morton for her ISH colt by Air Jordan (Lot 235). The bay is the second foal registered on CapallOir out of the Lux Z mare Bellegrove Prima Donna on whom Blanche has accumulated roughly 200 SJI points in amateur and ladies’ competitions. The combination won the amateur national championship at the RDS this year following an 11-horse jump-off. This is also the family of Castle Howard Casanova (CCI4*-S).

One after another, two €6,000 Winter Foal purchases were accredited to ‘cash’ buyers.

The first of the pair was the ISH filly CSF Cianna (Lot 237), a daughter of the Dutch Warmblood stallion Carrera VDL. Co Galway vendor Patrick Connolly bred this bay whose dam, the Ars Vivendi mare CSF Dolores, is a half-sister to the Flipper d’Elle gelding CSF Dassett Decoy (CCI3*-L). This is also the family of Galipolli ter Doorn (1.55m), Clonaslea (1.50m), etc.

Jim Tempany’s Tireragh Unique (Lot 238), who is by the Dutch Warmblood stallion Bustique, is a half-sister to the Nabab de Reve gelding Elejandro d’Over (1.35m), being out of Grande Dame E who was jumped at 1.30m level here by Cathal McMunn. That 2006 Darco mare is a half-sister to Nianca, a 1.50m performer in her own right and dam of Sianca (1.45m).

The top-priced yearling in the sale was Lot 168 (Bellscross Tysons Star) who was consigned by his Co Sligo breeder Alan Taylor and was knocked down to a ‘cash’ customer for €5,000. The chesnut ISH colt is out of the Lux Z mare Roadstown Star, a half-sister to the Verdi gelding Fernhill Dreamaway (CCI4*-S).

Among the foals heading to Britain was one of the few traditionally-bred animals in the sale, Jim Tempany’s brown filly (Lot 210) by the thoroughbred Lucarelli (Lot 210) who was knocked down for €3,300 to Britain’s Rachel Heald.

The June-foaled filly is out of the Kings Master mare The Kings Lady who, being out of the Big Sink Hope mare Skreenmor Dark Stranger, is a half-sister to the Limmerick gelding Ridire Dorcha who was sixth in the CCI5*-L at Pau in October. 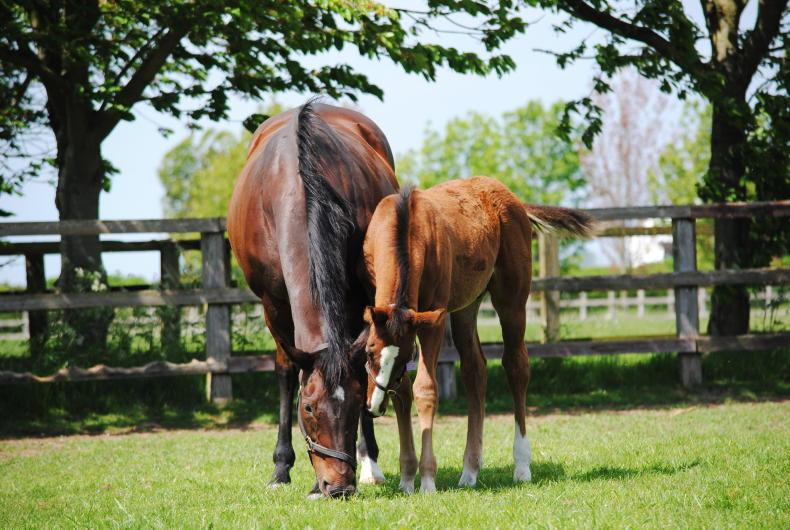 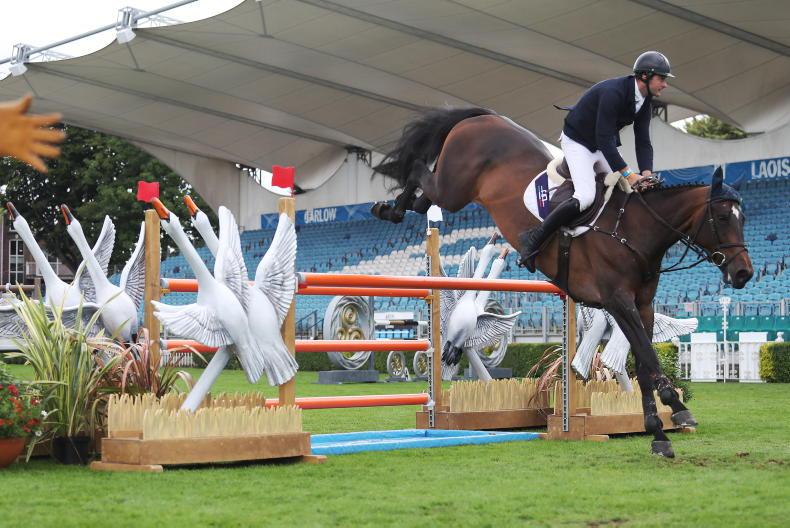 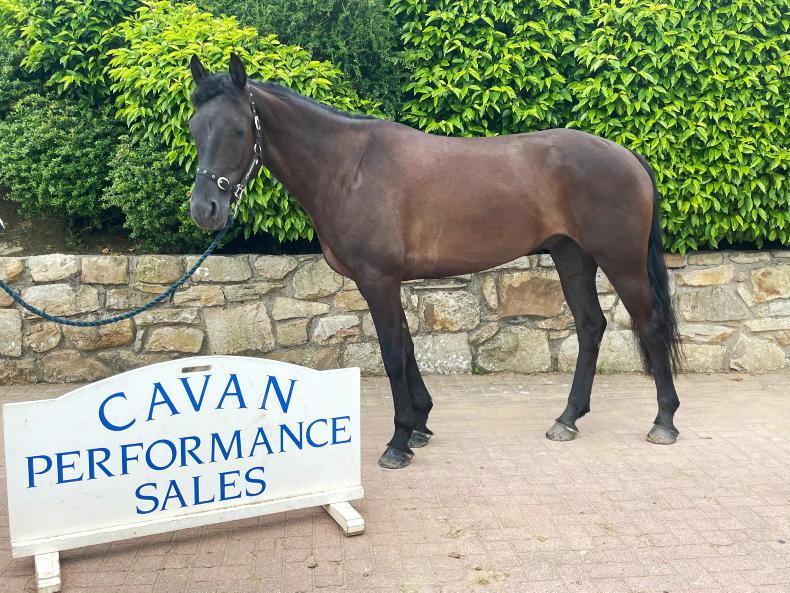 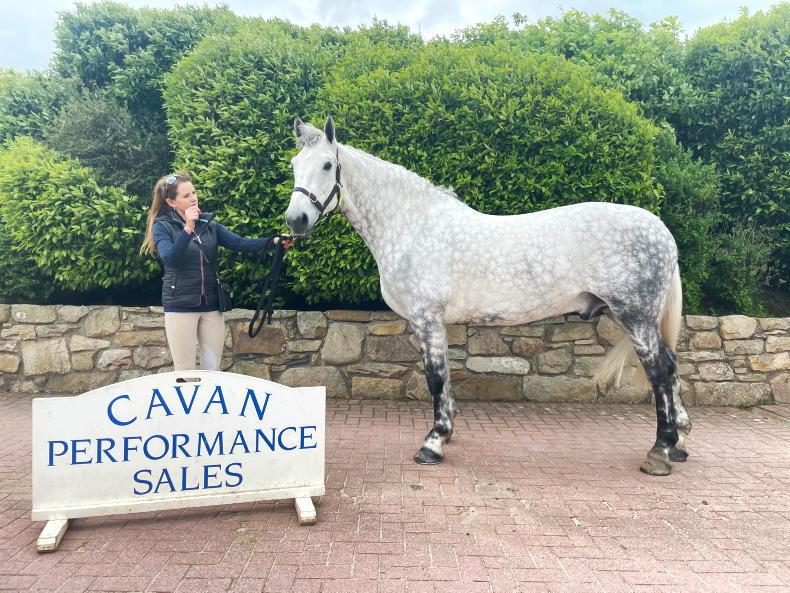