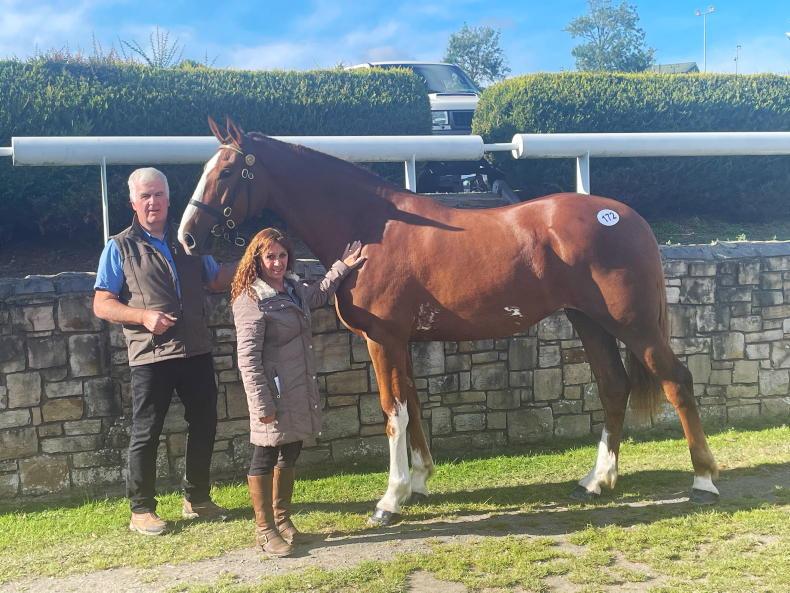 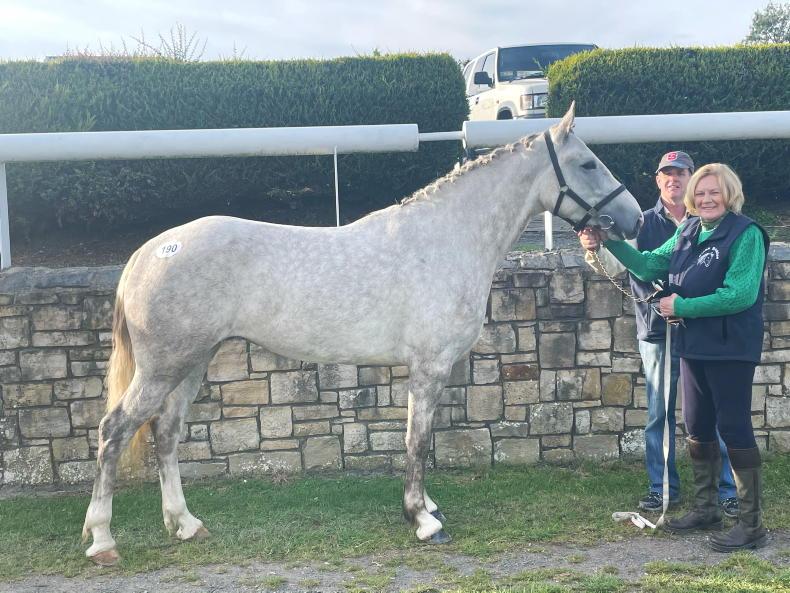 DUNGAR Cottage Breeze, a show quality two-year-old chesnut filly with a white splodge on her off side, made the top price of €9,000 at Thursday’s sale of Irish Draught horses in Cavan Equestrian Centre.

Bred in Co Tipperary by her vendor John Corbett, Lot 172 is by Carrickcottage Star out of the Upperchurch Breeze mare Dungar Breeze whose previous produce include the Grade A show jumper Dungar Clover Breeze, an Irish Sport Horse mare by by Boherdeal Clover.

“This line has been in the family for over 100 years,” said Upperchurch-based Corbett. “While this is a real quality sort, I have to move some of the fillies along. I still have her dam, who is coming 20 and is back in foal to Carrickcottage Star, and her yearling full-sister (Dungar Lady Rebel).

The successful buyer was Britain’s Sue Sanderson who has purchased from the same vendor in the past. “I’d say the oldest Draught they bought from me is now about 15,” revealed Corbett. “Sue produces them under saddle for the show ring with her daughter Molly doing the riding. I’d say this filly will never be sold again.”

Kay Blackwell gave €8,100 for John Meade’s Sea Heart Of Gold (Lot 190), a three-year-old grey filly by Young Carrabawn who was bred by Noreen O’Sullivan out of Milleys Glidawn Clover (by Glidawn Clover).

Welsh purchaser Alun Davies paid €6,500 for Oxview Jessey (Lot 194), a four-year-old roan mare consigned by her Co Mayo breeder, Gerry Ferguson. By Inisfree The Holy Grail, she is out of the Star Kingdom mare Key To The Kingdom and was sold scanned in foal to Tors Gentleman Farmer.

Lot 173, an unnamed two-year-old filly by Cloonacauneen Grandpa was sold by Eoin Griffin to Co Westmeath’s John Bracken for €5,000. The chesnut, who was bred in Co Galway by Michael Loughrey, is out of the Sillot Hill mare Killeen Bridge.

Lot 178A, who was described as a “true Irish Draught afraid of nothing – used to dogs and heavy machinery”, was the top-priced gelding in the sale at €4,700. Sold by his Co Donegal breeder David Hunter to Leanne Buchanan, the two-year-old by Castleview Inisfree Farmer is out of the Corran Ginger mare Corran First Lady. Fulton Buchanan parted with €4,000 for the top-priced broodmare in the sale, Sean Scannell’s Knocknashee Princess (Lot 182). A winner in the show ring, this 15-year-old daughter of Shenandoah Prince Holly out of the Castana mare Knocknashee Castana Queen is dam of the active Grade C show jumper SMC April Breeze, an eight-year-old ISH mare by Putra Sandhurst. She was sold scanned in foal to Killountain Cross.

The top-priced yearling in the sale was John Bracken’s unnamed dun or grey filly (Lot 166) by Liosderg Silver Pride who was knocked down for €2,600 to Co Cork’s John O’Connor. Described as a traditional type, she is out of the Fast Silver mare Cormaglava Corineen.

The top-priced foal was also a filly, My Kilmore Hailey (Lot 132), who was sold by her Co Cavan breeder, Patrick Galligan, to Co Wicklow’s Liam Corrigan for €3,200. The grey daughter of DS Ballagh Bouncer is the first foal out of the Clooncastle Silver Squire mare Callows Silver Sister.