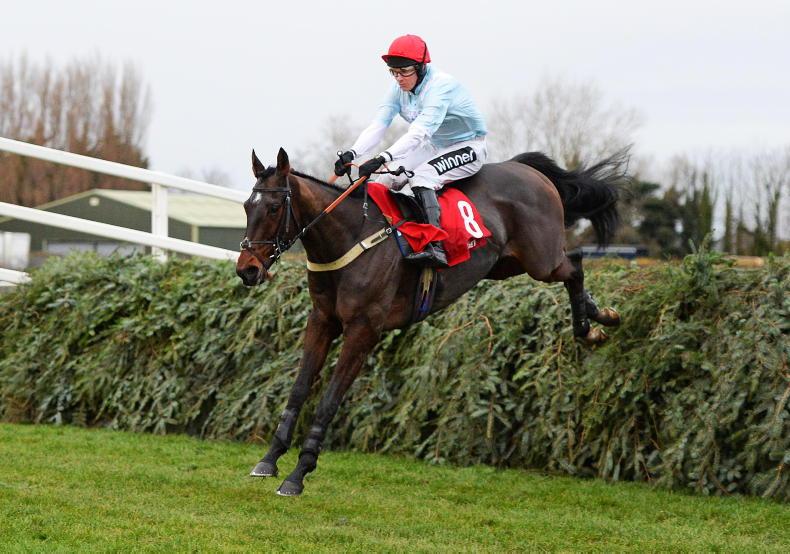 The 11-year-old Indian River gelding, who beat the 13/8 favourite, Another Venture, by four and a half lengths, finished 12th of 40 behind Minella Times in the Randox Grand National at Aintree in April and two of his three starts since then had been over the national fences at the Liverpool track.

This was a fifth chase success for Hogan’s Height who also has two hurdle race victories to his credit. He finished third and second on his two point-to-points runs here in 2016 when he was trained by Sam Curling for his breeder, Nick Teehan.

The in-form pointing partnership of trainer Alan Hill and rider Izzie Marshall was on the mark on Sunday at Warwick where the Walter Connors-bred Reikers Island made all to win concluding three-mile open hunters’ chase.

The winner of a Borris House four-year-old maiden in December 2017 on the last of four starts for Tom Keating, the 2013 Yeats gelding won a hurdle and a chase in 2018 when trained by Philip Hobbs and was also successful over fences when claiming a hunters’ chase for Hill’s wife Lawney in early June last year.

THREE meetings were held in Britain on Sunday, January 16th when the riding honours went to Alex Chadwick who recorded a treble, his first, on the seven-race card at Higham were four of the winners carried an IRE suffix.

Newmarket-based Chadwick partnered two of these starting with the James Owen-trained Pont Aven who carried Tim Gredley’s colours to a 30-length victory in the men’s open. The nine-year-old Doyen gelding, who had led until falling three out on his pointing debut at Horseheath on the final day of 2021, was previously trained by Willie Mullins for whom he won a hurdle and a chase.

The Chadwick treble came up in division two of the concluding maiden on the Nick Wright-owned and -trained Oval Street, a six-year-old Dylan Thomas gelding who was making his British pointing debut having been purchased for £8,000 at the above mentioned sale.

Rider/trainer Bradley Gibbs completed a double in the first division of that maiden on the similarly-aged Notnowcato gelding Whotheman, who was having his third British start, while Gina Andrews landed the ladies’ open on nine-year-old Mahler gelding General Arrow who is trained by her husband Tom Ellis.

Half of the six winners at Buckfastleigh were bred in this country including Molineaux who justified favouritism in the veteran horses’ conditions race.

Another 11-year-old King’s Theatre gelding, Stevan Steel, finished alone under Darren Edwards in the restricted while, towards the end of the afternoon, Will Biddick initiated a double in the seven-year-old and upwards maiden on the Tom Malone-owned and trained Jeremy Central. The 2014 Jeremy gelding had been placed seven times here for the Ciaran Fennessy yard.

There were three Irish-bred winners on the seven-race card at Sheriff Hutton where women trainers were to the fore with the in-form Kelly Morgan landing both divisions of the opening conditions race.

The second of the pair to strike was the nine-year-old Gold Well gelding Smoke Man who was ridden for his father John by Chatfeild-Roberts.

The nine-year-old Getaway gelding The Dellercheckout justified favouritism in the ladies’ open for the mother and daughter team of Caroline (trainer) and Immy (rider) Robinson while Zac Baker landed the concluding Goffs UK maiden for four-, five- and six-year-olds on Pedley Wood.

This five-year-old Westerner gelding, who is out of the unraced Milan mare Rosin De Beau, is due to come up as Lot 26 at Tattersalls’ Cheltenham sale this evening.

Men’s leaders keep up the pace

WILL Biddick, Bradley Gibbs and Tommie O’Brien, who currently fill the top three placings on the men’s championship leaderboard, all rode winners last weekend with the former on the mark both afternoons.

At Saturday’s Royal Artillery meeting in Larkhill, Biddick landed the five-year-old and upwards maiden on the Chris Barber-trained Satellite Receiver who, due to come up as Lot 40 at Tattersalls’ Cheltenham sale this evening, was having his second start in Britain.

The 2016 Shirocco gelding, who is out of the Satco mare Satellite Dancer and thus is a half-brother to the multiple blacktype winners Lord Windermere (by Oscar) and Sub Lieutenant (by Brian Boru), ran three times here last season, finishing third once, when trained by Donnchadh Doyle.

Josh Newman took the riding honours with a double which he initiated in the Level 2 conditions race on the Neil McLean-trained Sixteen Letters, a 10-year-old Well Chosen gelding, and completed in the concluding two-mile bumper for four- and five-year-olds on the 5/2 favourite, Maid Of The Night, who was having her second start.

The latter, who is catalogued to come under the hammer this evening as Lot 27, is a five-year-old Shirocco mare who is trained by former jockey Mark Grant for his wife Eimear.

The bay was bred in Co Tipperary by Grant’s mother Liz out of an Oscar half-sister to Menorah.

Co Galway native Tommie O’Brien moved on to the 10-win mark for the campaign when claiming the restricted on the James Ridley-trained, British-bred mare Lagonda.

Irish-breds won five of the eight races at Cocklebarrow on Sunday including the Francesca Poste-trained Drumlee Getaway who, on her British pointing debut in the restricted, gave rider James King the first leg of a double.

Five female riders partnered winners at this Heythrop including three who recorded their first pointing successes. The only one to do so on an Irish-bred horse was Ellie Callwood who landed division one of the older horses’ maiden on the eight-year-old Yeats gelding Precious Bounty who is trained by her boss, Tom Ellis. Callwood won the pony working hunter championship at Dublin in 2019 on Ennis Boy.

The four-, five- and six-year-old maiden over two and a half miles was won by the 2016 Leading Light gelding Caballo Diablo who, on his second start in Britain, justified favouritism under Alice Stevens.

Now in the care of Jonathan Barlow, the bay was placed twice in four starts last season for Colin Bowe.

Nick Orpwood took the riding honours at Friars Haugh as point-to-pointing returned to Scotland for the first time since March 2020.

Three of the seven winners were Irish-bred including Our Percy who justified odds-on favouritism in the older horses’ maiden.

Trained by Karen Lynn, the eight-year-old Stowaway gelding, who was making his pointing debut, is out of the Presenting mare Another Present.

Bradley Gibbs moved on to the 13-win mark for the campaign at Chipley Park where he won the Ineos Grenadier mixed open and the restricted on Irish-bred mares who he also trains, viz Highway Jewel (an eight-year-old by Ask) and Honey I’m Good (a Califet six-year-old).

Co Meath native Martin McIntyre landed the opening hunt members race on the Mike Vanstone-trained 10-year-old Craigsteel gelding Steel Express, while Will Biddick and Gina Andrews added to their tallies at the top of their respective riders’ tables with wins in the mares’ maiden on the British-bred Southfield Megan and in the Intermediate on the German-bred Indirocco.

MOST READ
BREEDERS’ 10 – Brian Daly: 'Always be the biggest critic of your own stock'
RACE NEWS: RACE offers new programme of skills for employment
Vadeni camp confident of a huge run in Eclipse to savour
THE OWNER: Charlotte Musgrave
HEART OF RACING: Dr John Downey and Dr Richard Downey