Title: BRITIAN: It's hats off to Larry 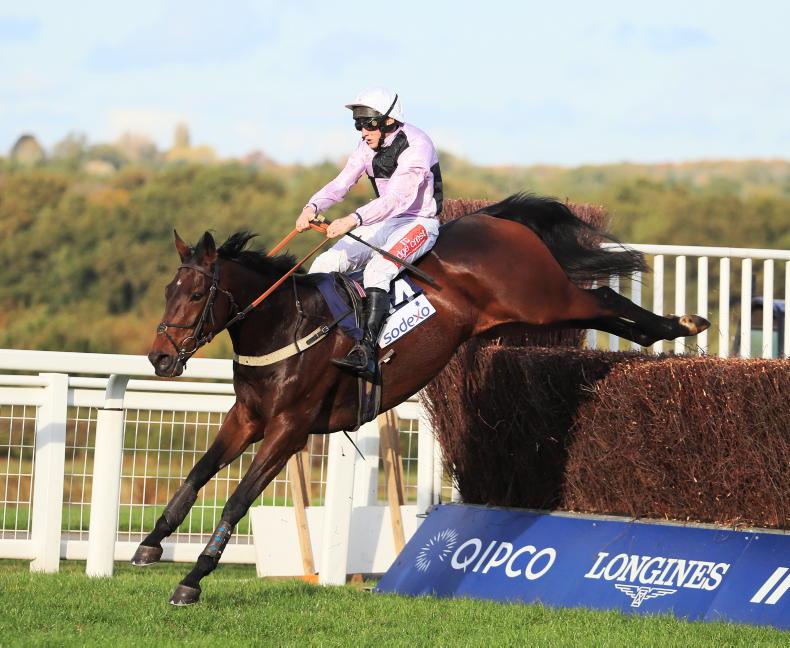 THE big race at Ascot last Saturday was the Grade 3 Bateaux London Gold Cup, and a strong pace set by Glen Forsa soon had his field strung out.

That included the 9/1 chance Larry (Gary/Jamie Moore), who got behind after errors at the first two fences, and did remarkably well to get back into the contest. That he did is partly due to the failings of others, but he and his rider deserve credit for a strong finish in testing conditions.

It saw them take over from the long-time leader two out, and gallop on to take the contest by six and a half lengths from Checkitout (Nigel/Sam Twiston-Davies), with Anthony Honeyball’s veteran Regal Encore (Richie McLernon) again showing his liking for Ascot with another creditable effort in third.

Top-weight Vinndication was aiming to maintain his 100% Ascot record having won this race last season, but he was pulled up sharply after David Bass felt him go wrong, and it was reported that he was lame behind.

Kim Bailey subsequently revealed that the horse had been suffering from a back problem, and while he had undergone surgery in the summer, the trainer felt that a problem persists, and has taken the decision to retire the eight-year-old, who won seven of his 15 races.

The listed handicap hurdle on this card is often informative, and this renewal looked notably solid form, with the right horses coming to the fore, and it produced a most impressive winner in the shape of Soaring Glory (Jonjo O’Neill/Tom Scudamore) winning by two and a half lengths from Leoncavallo (David Pipe/Fergus Gillard) and Boothill (Harry Fry/Sam Twiston-Davis), who were separated by just a nose as they fought out second.

The winner, a weak 5/1 shot, had taken the Betfair Hurdle at Newbury last season, and looked magnificent in the preliminaries.

He was a tad disappointing on soft ground here last December, but looks much stronger with another summer on his back, and he made light of the conditions to run out an authoritative winner.

The trio who chased him home all had something to recommend them, and this is likely to prove very reliable form as the season progresses.

Boothill, in particular, merits a mention, as this was just his second race over hurdles, and he is sure to progress for the experience of a competitive contest, having outclassed his rivals on his only start last term at Taunton.

The most thrilling finish at the Berkshire venue saw Amoola Gold repeat his 2020 win in the Listed Byrne Group Chase, and while he swooped late under Bridget Andrews to score 12 months ago, Dan Skelton’s chaser made his move even later this time, making up a dozen lengths from the home turn to run down Monsieur LeCoq (Jane Williams/Ciaran Gethings) after the latter had appeared to hold an unassailable lead at the last.

The winner was a stone higher than when landing last year’s race, but he is well suited by the stiff finish at Ascot, and while he made ground only gradually before the last, he again relished the climb to the line, and put his head in front inches from the line.

Grey Diamond (Sam Thomas/Sam Twiston-Davies) ran well to be beaten under five lengths in third, and will be better when returned to Sandown, which seems his ideal venue.

Away from the big meetings there was a notable achievement for Brian Hughes who rode a five-timer at Musselburgh, four of them for Donald McCain.