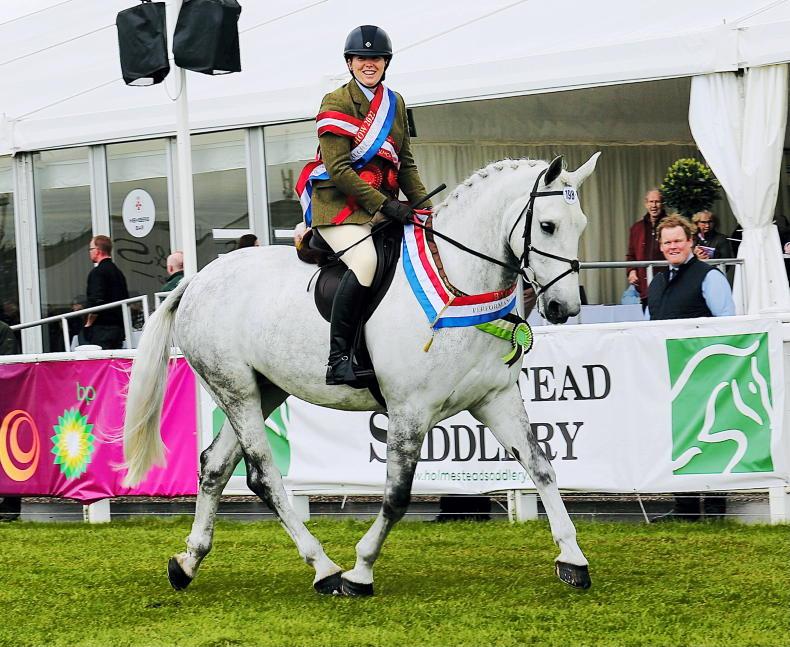 IT was in the 1980s as youngsters that myself and husband Ciaran Quigley had our first introduction to horses. As children, we both rode horses and that’s where our passion for horses started, back riding horses and work horses, as some farmers still used a horse on the farm.

We live in Ahascragh and this part of east Galway, bordering onto Co Roscommon, is well-known for breeding sport horses, Irish Draughts and Connemara ponies. I work at the Loughrea Hotel and Spa and Ciaran is a waterworks caretaker for Roscommon County Council.

Thankfully, our son Leo has the same interest in horses. We think it’s important for young people to get that experience so they can then follow on as horse breeders and that’s why we had a family day out at Balmoral Show last September!

1. Congratulations on breeding Gneeve King William, the recent dual performance and ridden Irish Draught champion at Balmoral. Tell us more about him?

Gneeve King William is by Treanlaur Rocky out of Leonie’s Lady and he was born on our farm in Co Galway - a simple, plain farm. His dam is by It’s The Quiet Man going back to Kildalton Gold, Crannagh Hero and Clover Hill.

Leonie’s Lady was bought as a three-year-old from a friend in Roscommon. Treanlaur Rocky (Kensons King William x Ginger Dick) stood in Clooncagh Stud in Co Roscommon and we chose him as he had old bloodlines, which we believe are important in the breeding of Irish Draughts.

As a foal, he was well handled and had a lovely, quiet temperament. Leo always spent time with him and he was known then as Joey The Buzz. They had a unique relationship and this is part of the reason for the foal being so quiet.

He was sold at eight months old to David Kerse, near Craughwell, who showed him in-hand as a yearling when he took second prize at Ardrahan. We kept in touch and saw the horse as he grew, before he was then sold to John O’Sullivan, who lives outside Killarney, Co Kerry.

John brought him on and produced him for numerous shows. They qualified for the Irish Draught performance final at the RDS where he took a prize home and then he was sold to Ian and Jenny Williams. Jenny took him to Balmoral Show where he won his performance class, both in September last year and now again at Balmoral’s traditional May date.

Our proudest moment as a breeder was watching him and Jenny win at Balmoral last year, although having his photo taken on the same day with racehorse trainer Willie Mullins was a close second for Ciaran! We were just as delighted about their recent achievement at Balmoral.

Leonie’s Lady is mine, she produced Gneeve King William and another of her colts, brought on by Annette Brand, went to the mounted police unit in Germany.

Ciaran’s favourite broodmare is Easylift Gold (Easy Lift x Kildalton Gold) as she has produced numerous foals. One colt was sold to Catherine Hawkins in England who brought him on before he too joined the police service. Last year’s foal, The Taylor Quigley (Rakish Ri), won the traditional Irish foal qualifier at Creagh and went to the Horse Sport Ireland foal finals in Cavan.

Leo’s favourite is Ruby who he has owned since he was a young child. Ruby is now 23 years old and has produced quality foals that have gone on and won competitions.

4. How many broodmares do you currently own?

Between the three of us, we have eight mares and also have youngstock coming on.

5. Why do you breed Irish Draughts?

We breed Irish Draught horses as they have a lovely temperament, another reason they’re so popular now. They’re easy to manage and are just good-natured horses to work with. They’re an all-rounder that suits all ages and riders, from beginners to professionals, leisure to competition.

6. Describe your regime for keeping mares/youngstock?

They’re bedded on straw with access to three sheds and a yard. The youngstock are wormed regularly, as are the adult stock and they also get multivitamin and copper supplements to ensure a healthy immune system.

7. Best advice you ever got?

Ciaran’s grandfather said: “You can be pennywise but pound foolish!” For me, the best advice was: “Never give up, follow your dreams.”

8. If you could have bred any famous horse, which one would it be?

Ciaran would have loved to have bred Cruising as he was an outstanding stallion with superb capabilities. Personally, it would be Mulrys Error, as again he was bred on an ordinary farm in Knockcroghery, Co Roscommon and went on to compete at Badminton. The public fell in love with this super cob with big hooves!

9. Breeding Irish Draughts - would you do it all over again?

We definitely have no regrets in breeding Irish Draughts, we believe in keeping the old bloodlines alive. And it gave us one of the best days at the Balmoral ringside.

10. Any schemes you would like to see being introduced?

We would like more programmes for the youth. For example, where possible, introduce horse riding for school age children. Any animal interaction is good for a child.

Leo has a great interest in horses but unfortunately there’s no programme in his school. We’re very fortunate to have Creagh Equestrian Centre outside Ballinasloe where Damien Carey is fantastic with young people. The horse riding lessons are brilliant and it can be seen how every child enjoys their time there.

We do believe that programmes must be introduced to keep the interest in breeding horses of all breeds and to bring on young riders, who could go on to compete at top level and showcase the quality horses that we breed in Ireland.