Title: BREEDERS 10 – John Roche: 'Work according to your pocket' 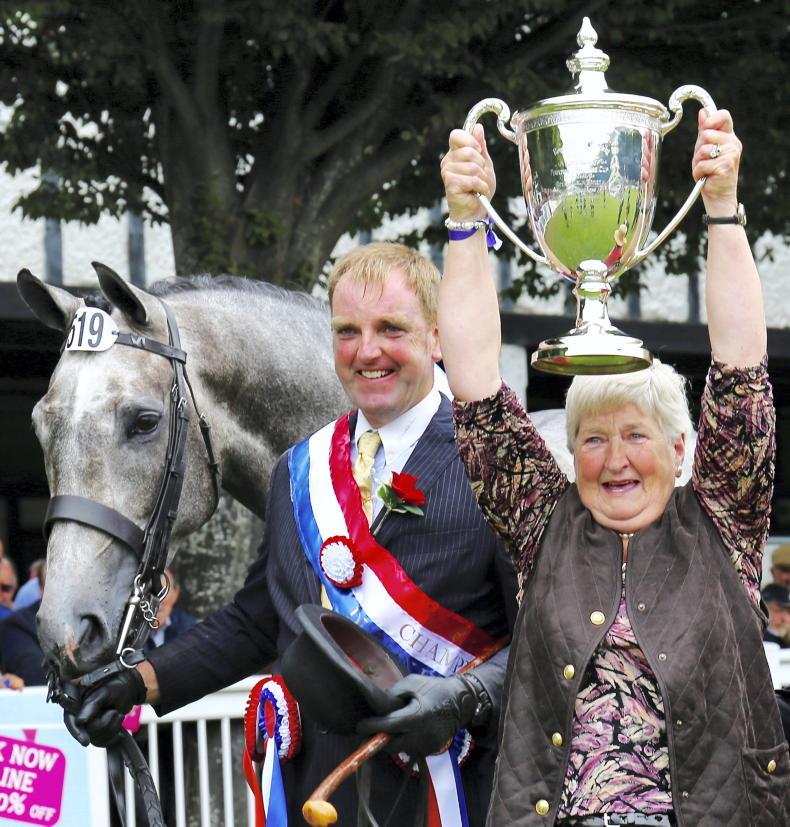 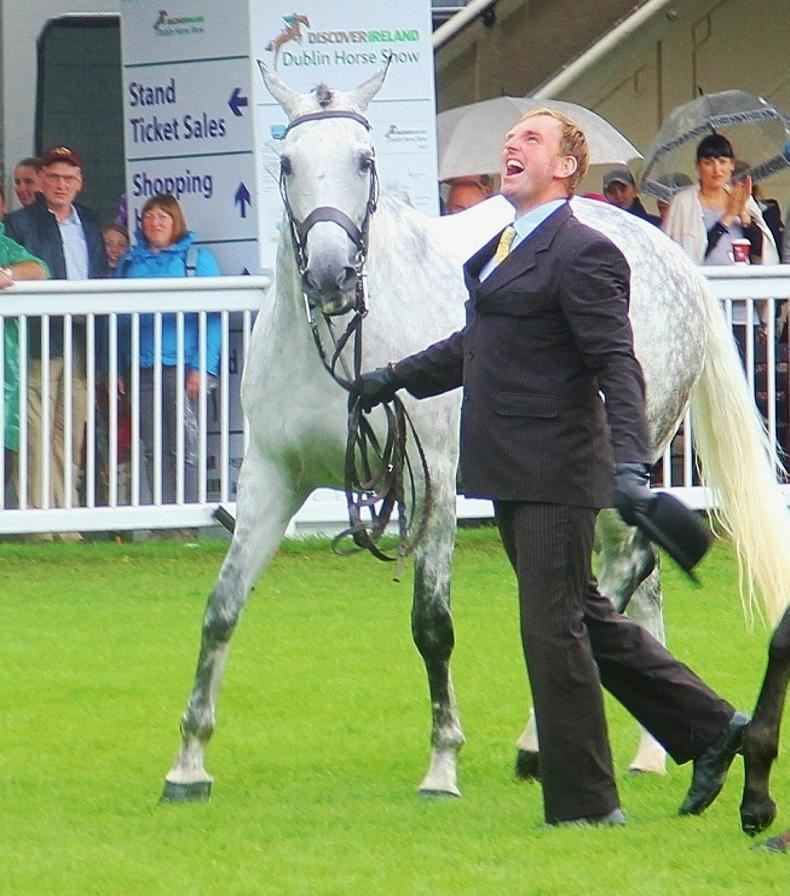 Heavenwards: John Roche's reaction to his first win in The Irish Field Breeders' Championship with Assagart My Only Hope in 2014 \ Susan Finnerty 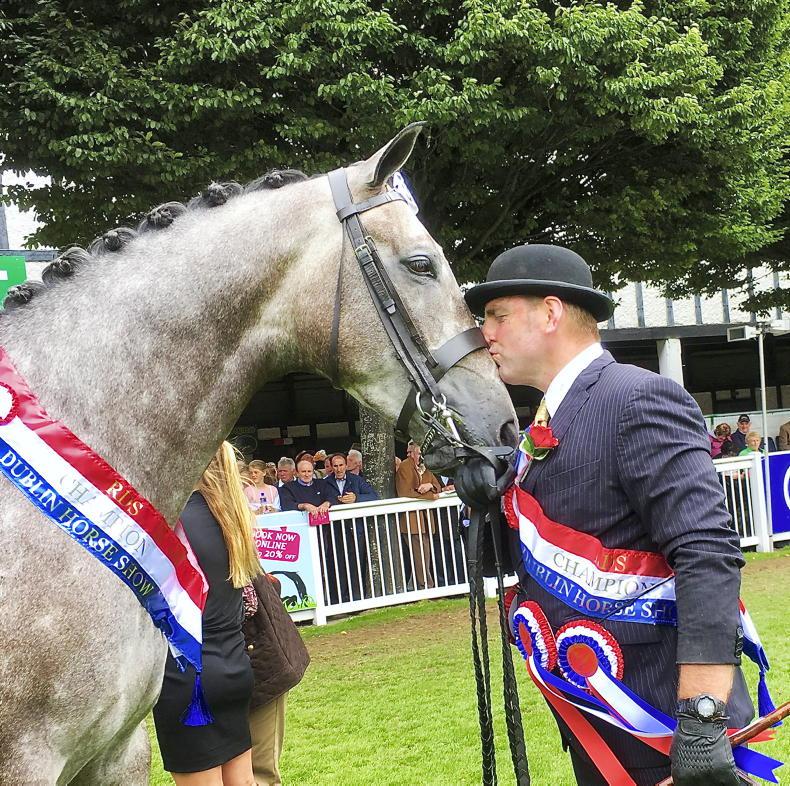 I WAS born part of a family of six; five sisters – Monica, Deirdre, Patrice, Michelle and Marguerite – and myself with Mam and Dad, Mary Margaret and Michael Roche in Assagart, Co Wexford.

Grew up with horses all my life and when I was four years of age, started riding a pony called Black Beauty. He was the main reason for us all starting with ponies. I progressed then to a pony called Shannonstone and he brought me to places I only dreamed of; derbies and Grand Prix classes.

I fell out of love with horses after my 20th birthday and went into pedigree sheep instead. All of a sudden I found a love for horses again because daddy decided to keep one of the mares, so I went back show jumping and basically, that was the start of me getting into horses again.

Assagart Wonder (Flagmount King) did all the four-year-old championships with me on board and now it’s generation after generation, as I’ve three young boys – Jamie, Cathal and Anthony – with wife Catherine.

We got married 14 years ago and our three boys are showing a bit of interest in horses, so, hopefully, the Assagart dynasty will keep on going!

1. Proudest moment(s) as a breeder?

Had to be 2017 when I won the double in Dublin as my dad also had a major double there in 1979. Thanks be to God, I was able to do something similar, by winning the Laidlaw Cup [young horse championship] with Assagart Lord Lancer (Castleforbes Lord Lancer) and later on that same day, The Irish Field Breeders’ Championship with his mammy My Only Hope (Big Sink Hope).

It was a dream come true because the way dad did it was Assagart Kit (Prince Rois) won the broodmare championship and her son Assagart King (Retieme) won the Laidlaw Cup. So they’re dream memories and that was my proudest moment. Heavenwards: John Roche's reaction to his first win in The Irish Field Breeders' Championship with Assagart My Only Hope in 2014 \ Susan Finnerty

2. Favourite broodmare, past or present?

No contest. It has to be [five-time Dublin broodmare champion] Assagart Kit because she was the flagbearer of Assagart breeding and without her, we’d never be heard of.

Memories have to be made first so she’s definitely my favourite. I remember her last championship in Dublin in 1981 with mam showing her. At the time, it kind of went over my head but when you look back on it, it’s just great memories.

3. How many broodmares do you currently have?

Eight mares due to foal this year, between Draughts and sport horses. Lansdown, Jack The Robin, Watar – they’re the stallions I’ve gone to for this year’s foals, so hopefully I can breed a couple of nice horses from there.

5. Describe your winter regime for mares/youngstock.

They’re not housed until around Christmas week when the mares are put into individual stalls with ad-lib haylage and fed with oats, pulp and soya.

The youngstock are all loose in a shed and kept on straw bedding. Again, they get haylage ad-lib and fed once a day on the same mixture as the mares. It seems to work for me. I don’t believe in feeding broodmares too much when they’re heavy in-foal, as you can get too big a foal and a too-big foal is very hard on mares foaling, so the oats works brilliant with the mares. Why change something when it’s not broke?

6. Have you changed your breeding policy over the years?

For the future, I have to, yes. I was a traditional man, always was. The only mare that was covered with a continental stallion was My Only Hope and it worked out for me but it’s the market you have to work to now and that’s the way I’m going to do it.

I’m going to give a certain amount of mares to continental-cross sires with thoroughbred in the dam line and go to traditional Irish stallions like Lansdown, Jack The Robin and Watar, because there’s Draught in some of the dam lines here and I just want to keep the traditional line going.

I still think there is a future in the traditional horse if you have the right one but it’s to get the right one.

It’s a tough one. I’m a traditional breeding man but I’m going to have to change lines going forward. It’s a hard pill to swallow but you have to work according to your pocket and your means. Look, there is a market there but it’s a very fickle one and it’s getting smaller and smaller. I find it is getting harder to sell a show horse because the market is not there to get him sold. So I’m changing the way in breeding a more all-round horse, one that can do eventing, like what we had in the 1980s. An all-round horse, that’s what I’ll have to breed for the future.

Every one of my family; Mam, she’s a big cog in the wheel here and such an important part of the team. The boys, as they get older, help with day-to-day life on the farm and love attending the shows as a family with Catherine and myself; Brendan Tobin, who shows alongside me throughout the show season; Jennifer Kennedy, who works with the ridden horses; Nicola McCarthy for Dublin and Balmoral and my sisters are big supporters too.

Best advice my Dad gave me is to keep your ear open and listen to everything because you’ll never know it all. And it’s the truest words I’ve ever heard in my life. I’m 48 years of age and I’m still learning.

10. What four people, living or dead, would you invite to a dinner party?

Nelson Mandela is one, because I think he’s the most inspiring leader that ever lived. Pele is number two, the most famous soccer player ever and a genius of a man. Number three would be Tony McCoy because he’s the best jockey and then JFK, the USA president with Wexford bloodlines!

Bacon and cabbage and my mother-in-law’s carrot cake, that’s what would be on the menu!