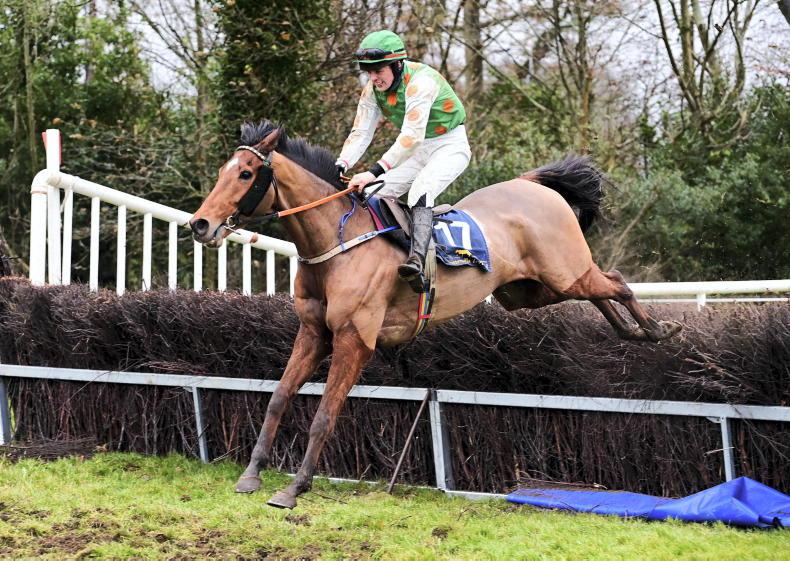 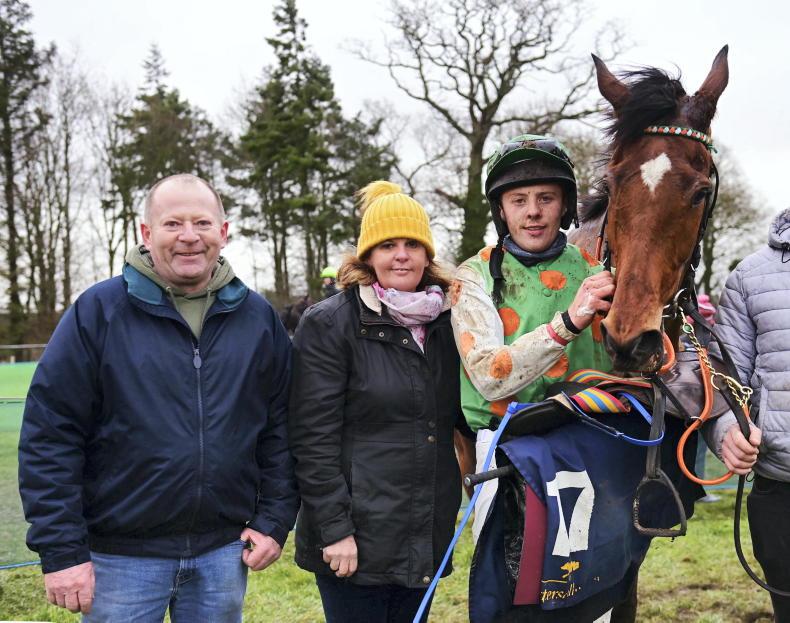 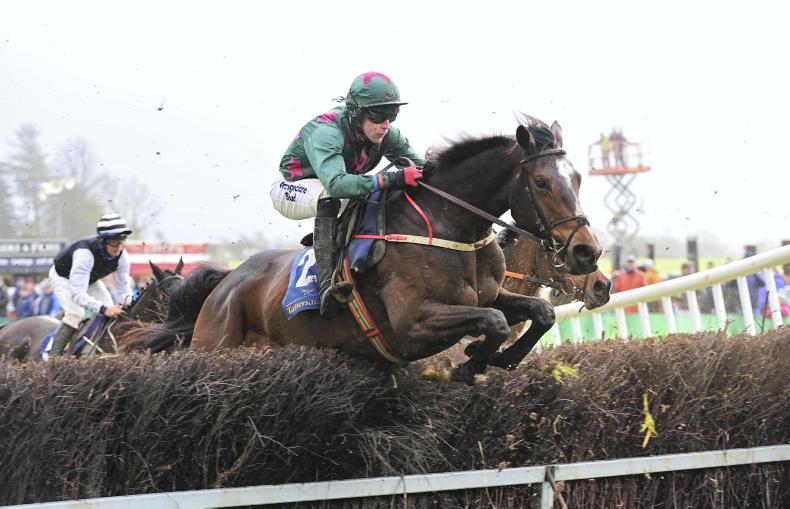 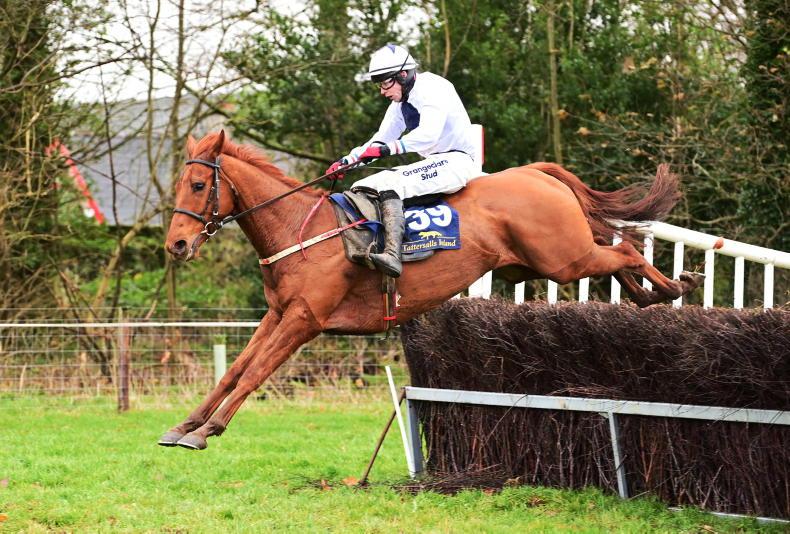 THERE were a mammoth 121 runners across 11 races at Borris House on Sunday on the final weekend of action before the Christmas break.

The feature contest of the day was the red-hot renewal of the open contest which saw 19 runners face the starter.

As the runners turned for home, there were only two horses in with a real chance of success, as Mighty Stowaway led Er Dancer (6/1 – 5/1). The former was soon challenged and headed by the latter as Er Dancer and Alan Harney went on to score by a cosy six lengths from the Carl Millar-ridden Mighty Stowaway.

The Donnchadh Doyle-trained winner was supplementing his recent seasonal return success at Turtulla last month. “That’s my second winner. A big thanks to Donnchadh, he’s giving me every chance. We didn’t think he was that good but that was a very good open and he’ll probably improve again,” said Harney, of the Monbeg Syndicate-owned winner.

The opening four-year-old mares’ maiden was divided, and it saw the Ellen Doyle and Alex Harvey combination strike a double as they won both divisions of the contest.

The opening division went the way of the recent Ballycrystal second Criquette (6/1), who managed to head the long-time leader Vicki Vale after the last. The margin of success was half a length at the line.

“She had a nice run in Ballycrystal the last day, she just got bogged up on the ground. The nicer ground and sharper track today suited her a lot better. She jumped well and they had her in great nick for today. She toughed it out well to the line,” said Harvey of the Baltimore Stables Syndicate-owned mare.

The Baltimore Stables Syndicate colours were in the winners’ enclosure again in the second division as Halka Du Tabert (4/1 – 3/1) ran out a mightily impressive 45-length winner. The daughter of Balko was never far from the pace and rewarded Harvey and Doyle with their quick double.

Dame De Fortune finished a remote second with Born Famous a further four lengths back in third. “She’ll head to the sales now. She never missed a beat the whole way around and her jumping was unbelievable,” said James Doyle, brother of the winning handler.

The five-year-old mares’ maiden was one of just two races not to divide on the card and it was won in good fashion by the Maike Magnussen-owned and trained Camilla’s Choice (3/2 – 4/1).

The winning debutante was ridden to victory by Finian Maguire and the pair managed to hold off the 87-rated track chaser Eightytwo Team by four lengths in what was a third winner of the season for Maguire.

A Jet-propelled double for team Farrell and Cavanagh

THE four-year-old geldings’ maiden saw a three-way division and it was the Cormac Farrell and Simon Cavanagh combination that benefitted the most as they took the opening two divisions with two very promising debutants.

The well-backed favourite Jet Powered (5/2 – 2/1 favourite) was given a confident ride by Cavanagh, and having been held up early, once he hit the front on the turn for home, he wasn’t for catching. The Ballymaglassan Farm partnership-owned gelding won by an easy eight lengths at the line from the Sean O’Rourke-ridden Champagne Glory.

Farrell was quick to praise Anna Calder in the aftermath of Dancing City’s (5/2 – 2/1 favourite) win in the second division of the geldings’ maiden. She had done all of the work with the four-year-old before this assignment and it was a first Irish point-to-point runner and winner for his sire Feel Like Dancing.

The chesnut gelding hit the front at the second last and was in complete control from there to score by 12 lengths from the Colin Bowe-trained Thomas Mor. The Leamore Horses partnership-owned winner was providing Cavanagh with a 32nd winner of his career between the flags.

Of the pair he said: “They are two very smart horses. We went down to Ballindenisk last weekend to run but Cormac wasn’t very happy with the ground so we didn’t run. We’ve always liked Dancing In The City, he has done everything right. Jet Powered has a big pedigree, he’s related to Sapphire Lady so you couldn’t ask for much more.”

The third division of that four-year-old geldings’ maiden saw last weekend’s Corbeagh House fifth, Path D’Oroux (2/1 – 6/4 favourite), run out a game one-length winner over the Harley Dunne-trained and owned Haiti Couleurs. The winner made all here under Liam Gilligan and was providing Goff with the first leg of his double on the day.

“He flew home there last week but it was kind of my mistake, so I was going to make plenty of use of him today and it worked out well as all he does is stay going. He’ll head to the sales now, if not bought beforehand,” said Gilligan of the Caitriona Goff-owned winner.

Goff’s double was completed in the second division of the five-year-old geldings’ maiden as Goodoldbill (2/1 – 3/1 joint-favourite) ran out an easy 15-length winner on his fifth start.

The winner, also carrying the colours of Caitriona Goff, was ridden by Aaron Sinnott and despite making a couple of mistakes at the final two fences, still had plenty left in the tank to hold off the Caroline McCaldin-trained Ballyhack.

The opening division of the five-year-old geldings’ maiden went the way of Gold Emery (4/1) for James Kenny and Colin Bowe. The half-brother to the Willie Mulins-trained Cilaos Emery was coming here after two previous efforts at Kinsale and Moig South, but he showed marked improvement on this occasion to win by three lengths from the Alan Harney-ridden Separate Ways.

“He had two middling enough runs but he always went well at home so we were a bit surprised that he wasn’t running as well on the track. He did it well today, the hard way from the front and jumped really well. When they came to him, he picked up and went away again. He loves soft ground,” said Kenny, of the Milestone Bloodstock Ltd-owned winner.

Moral Of The Story digs the ground

THE concluding six-year-old and upwards’ maiden was divided, and it provided two riders with their first winners between the flags. The opening division saw Killeagh native Nora Walsh steer the Johnny Hurley-trained and owned Moral Of The Story (4/1 – 5/1) to a length-and-a-half success over the Luke Murphy-ridden Whiskey For Jack.

This was Walsh’s third time riding the son of Shirocco who relished the ground conditions on offer at the Co Carlow venue. “I started with Johnny and Danielle in East Cork this year. They’ve been very good to me from the start, that’s my third spin on that horse for them,” said Walsh.

“Things didn’t go to plan last week but he really came up trumps today. He relished conditions today. He didn’t make it easy but he was there when I needed him.

“I ride out for Andrew Lee and Denis Ahern as well as having a couple at home for myself too so it’s very busy.”

The second division saw Rochelle Murphy ride her first winner between the flags on Truckers Tangle (4/1 – 6/1), having already previously tasted victory on the track back in March.

The Daryl Deacon-trained winner was a couple of lengths down at the last where the unlucky Jeremys Central made a mistake, leaving the way clear for Truckers Tangle and Murphy to win going away at the line.

The Belinda O’Brien-owned winner showed good progress here from his recent fourth-placed effort at Moig South on his seasonal reappearance.

(I. McCarthy): The son of Telescope posted a promising debut effort in the opening division of the four-year-old geldings’ maiden, under Luke Murphy, and he looks sure to be in the winner’s enclosure shortly.

Committee keep up the pace

A LOT of credit must go to the Carlow Farmers committee as they ran the 11 races off very quickly, with the first race at 11am and the last getting under way at 3pm.

Announcer Brian Rice was especially efficient on the microphone, encouraging all runners to the parade ring as quickly as possible!