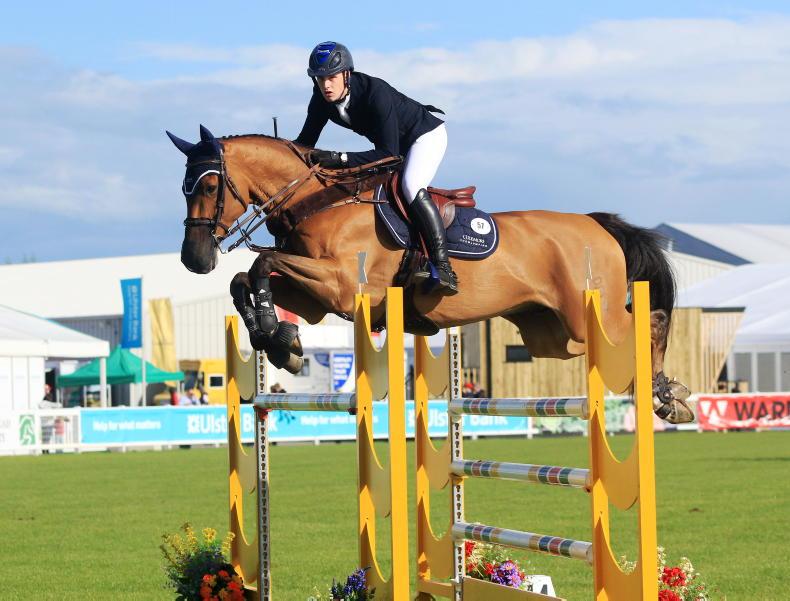 BRITISH-based Sligo show jumper Richard Howley returned to Irish soil for the international show jumping action at Balmoral last week and kicked off with a win in Wednesday’s 1.40m Topspec International Speed class, which offered a prize fund of £2,750.

From a starting field of 29, 16 produced a clear round and Howley was the fastest of those aboard Mikey Pender’s nine-year-old mare Chichi Van Overis Z (Clintissimo Z x Amadeus Z), who was campaigned earlier in the season in Spain by Co Clare’s Eoin McMahon. The pair stopped the clock in 61.82 seconds to earn the top prize of £907.

A past winner in Balmoral, English visitor Louise Saywell followed closely behind when she clocked 61.84 with Sultan Saud’s 13-year-old gelding Sharp Image for second place.

Last to go, 18-year-old Niamh McEvoy used her late draw to the best of her advantage with GBBS Int Ltd’s eight-year-old gelding BP Winston, and their time of 61.84 proved good enough for third place. Bred by Ruth Walsh, BP Winston is by Cavalier Royale out of Diamond Puissance (Puissance).

Also jumping later in the draw was youngster Max Wachman and Coolmore Showjumping’s Ikaros. The combination answered all the questions, but in a slower time of 64.59 for fourth place.

Australia’s Jake Hunter made no mistakes with the Duffy Ekberg Stables-owned Ecklands Helado, clear in a time of 66.58 for fifth place, ahead of young rider Seamus Hughes Kennedy and Cuffesgrange Cavado, who clocked 66.82, to earn sixth place.

The second international class on Wednesday was the Holmestead Saddlery-sponsored 1.45m Stakes which offered a £4,000 prize fund.

Tipperary show jumper Max Wachman has plenty of experience competing on the international circuit already this year, having started his season in Florida where he was part of the winning senior Nations Cup team, and he used that experience here to win aboard Coolmore Showjumping’s 13-year-old gelding Quintini. Going late in the draw, Wachman delivered the fastest of seven double clear rounds in a time of 41.37 seconds.

Niamh McEvoy has rarely left a show grounds without a rosette aboard Robin Bingham’s Templepatrick Welcome Limmerick (Limmerick x Lux Z) and the pair began what was to be an excellent week with a runner-up finish when they were just hundredths of a second slower in 41.44.

Britain’s Louise Saywell was back in the line-up, this time taking third place with Kingsborough Kasper (Kannan x Revenge), clear in 42.27, while in fourth place was occupied by Jenny Rankin with Vanessa Mannix’s 11-year-old mare Carmela Z who was double clear in 43.01. Cian O’Connor put in a foot-perfect round with Ronnoco Jump Ltd’s Kinsale in a time of 44.89 for fifth place, ahead of Greg Broderick and North Star Sporthorses’ Coolivio PS, clear in 46.84.