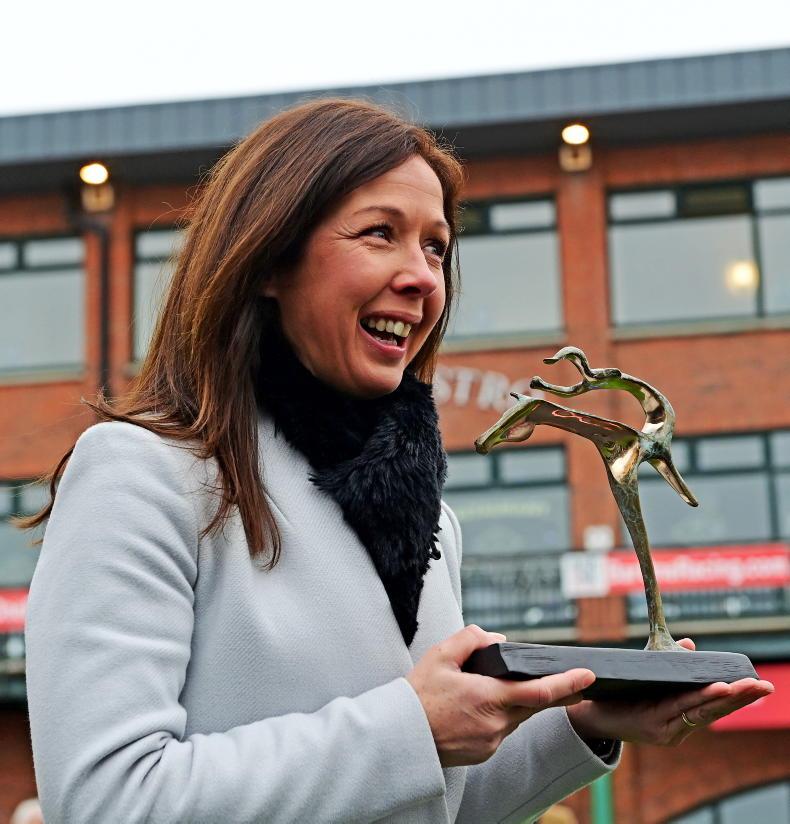 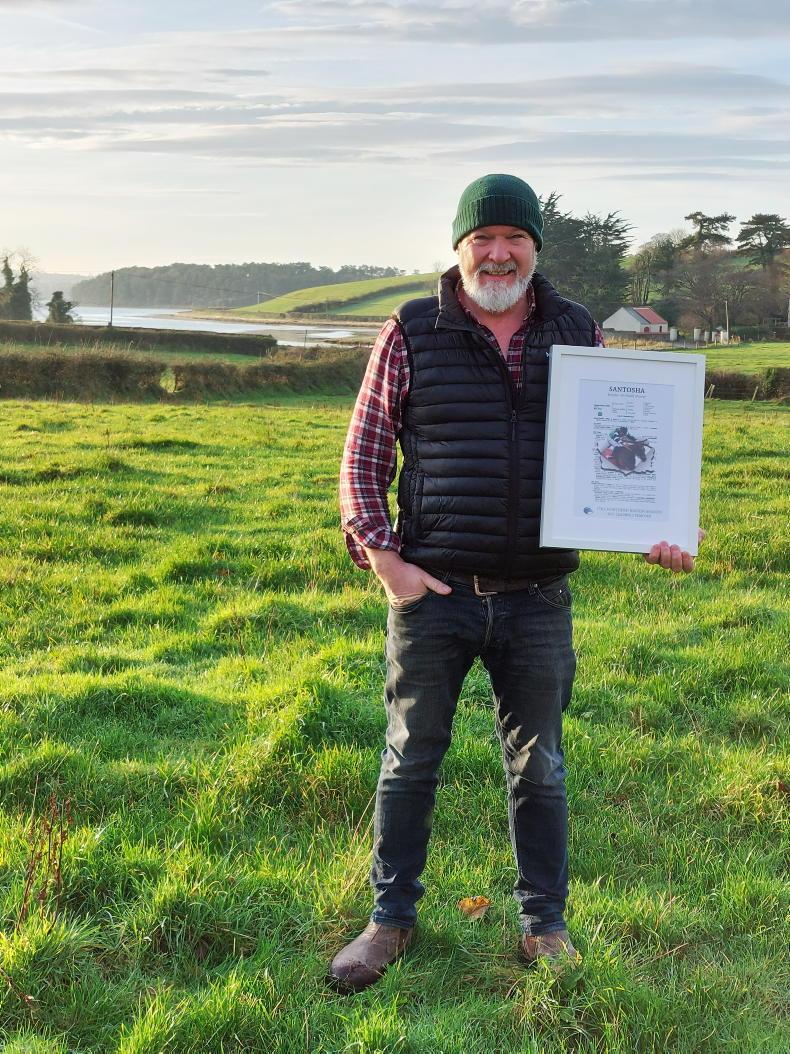 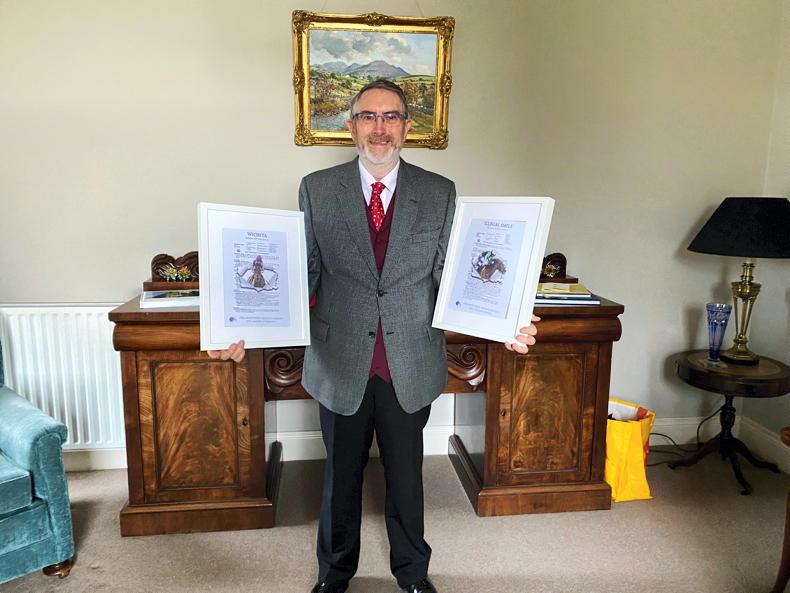 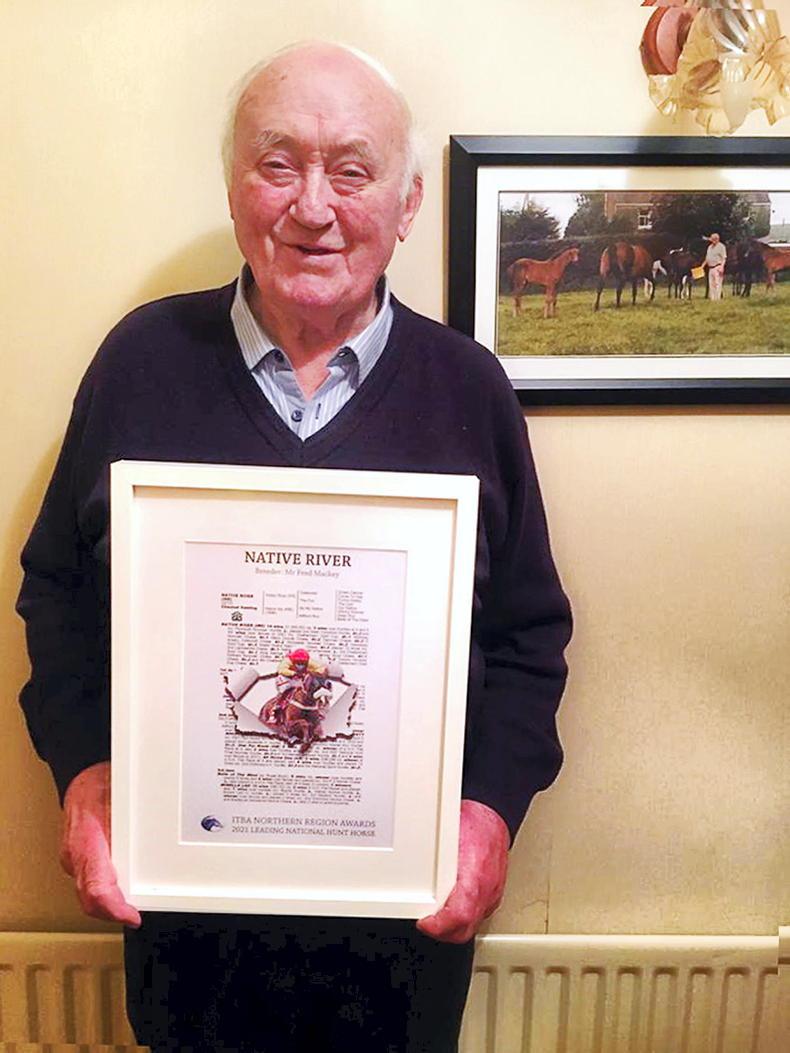 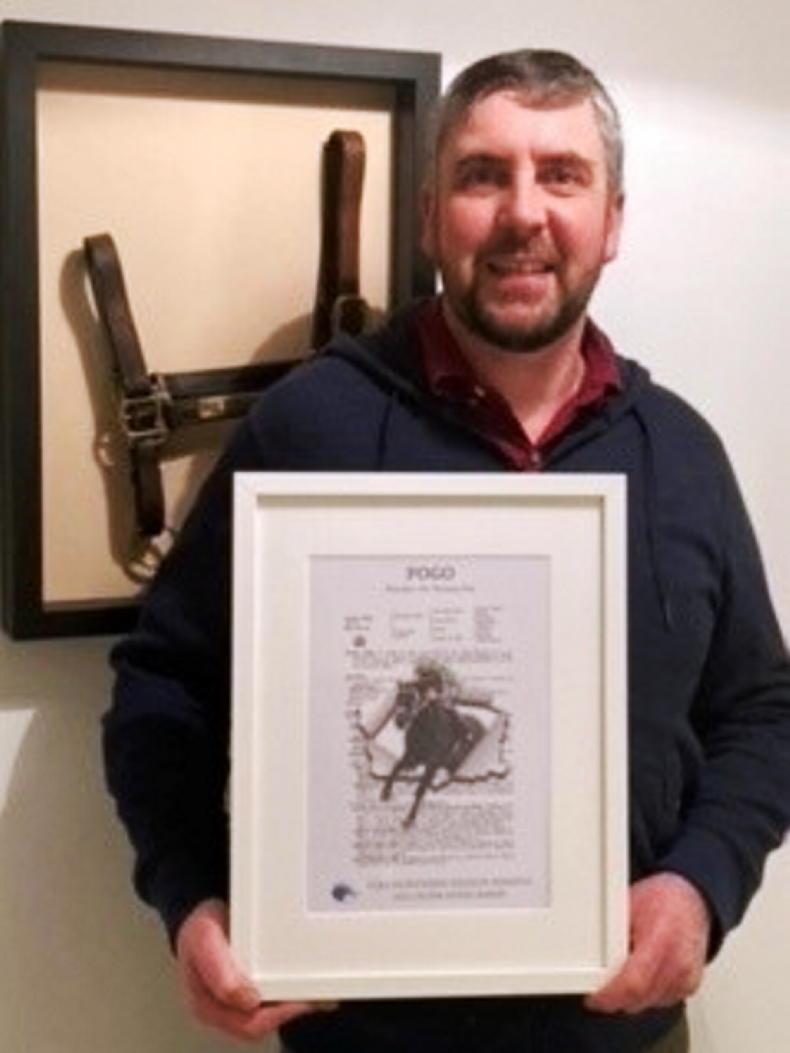 Declan Foy with the award for Pogo 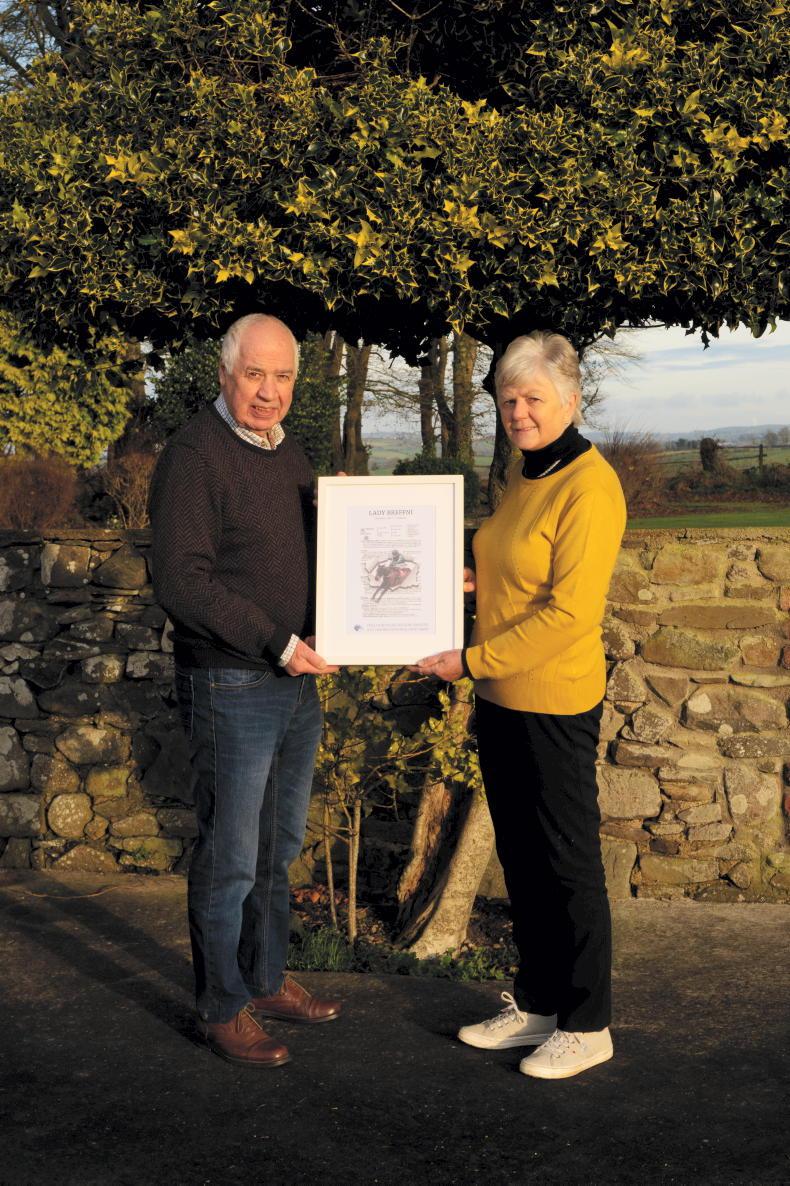 Breeder of Lady Breffni, John (T.J.) Adams and his wife Marjorie
Previous Next

FOR the second year running, Covid-19 has prevented the Northern Region of the Irish Thoroughbred Breeders’ Association from presenting their annual awards at a big dinner in a Belfast hotel, but the awards have been delivered to the worthy winners.

One special award yet to be delivered is for Jennifer Pugh (née Kidd), chief medical officer with the Irish Horseracing Regulatory Board. Northern breeders wish to acknowledge the vital role played by the Loughbrickland lady in the resumption and safe continuation of racing since June 2020 after an eight-week stoppage.

The 11-year-old Native River continues to do his breeder - Fred Mackey from Dromore, Co Down - proud and won the Leading National Hunt Horse award. Native River won the Grade 2 Cotswold Chase at Cheltenham last January, finished fourth in the Gold Cup, third at Aintree and placed second at Aintree earlier this month.

Paddy Murray from Co Down is the registered breeder of Santosha, winner of the Group 3 Princess Margaret Stakes at Ascot in 2020.

Based in Killyleagh, Co Down, Max Ervine is a regular award winner and he collected two gongs this time around. Max bred Wichita, a leading two-year-old colt of 2019 who went on to place second in the 2000 Guineas last year before suffering a fatal injury in Australia.

Max was also represented on the track by Illegal Smile, a daughter of Camacho he sold for €35,000 at the Orby Sale and who went on to win blacktype in Canada.

Thomas Foy, a retired dairy farmer from Downpatrick, bred the consistent Pogo, winner of the Older Horse award. Trained by Charles Hills, Pogo won a listed race at Leicester in April and was placed in two Group 2 races during the summer. 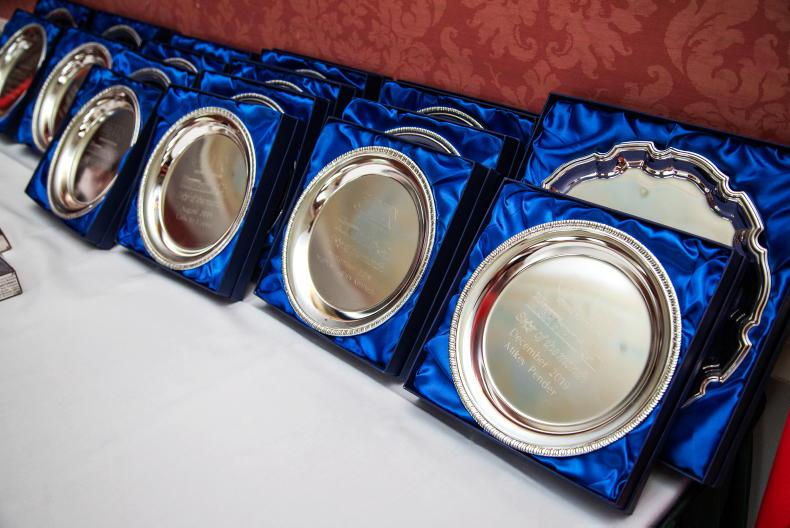 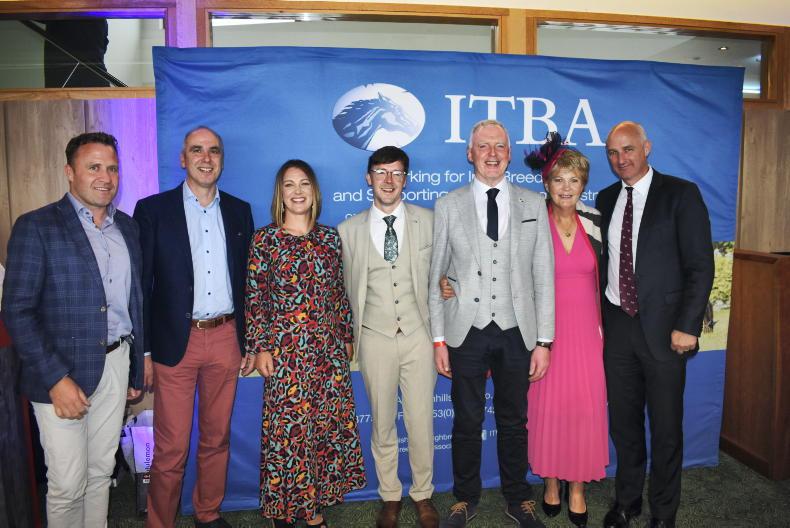 Mark Costello
NEWS: Big drop in number of British mares visiting Irish stallions
Brexit and rising transport costs are thought to be the main reasons behind the sharp decrease in the amount of movement of broodmares between jurisdictions 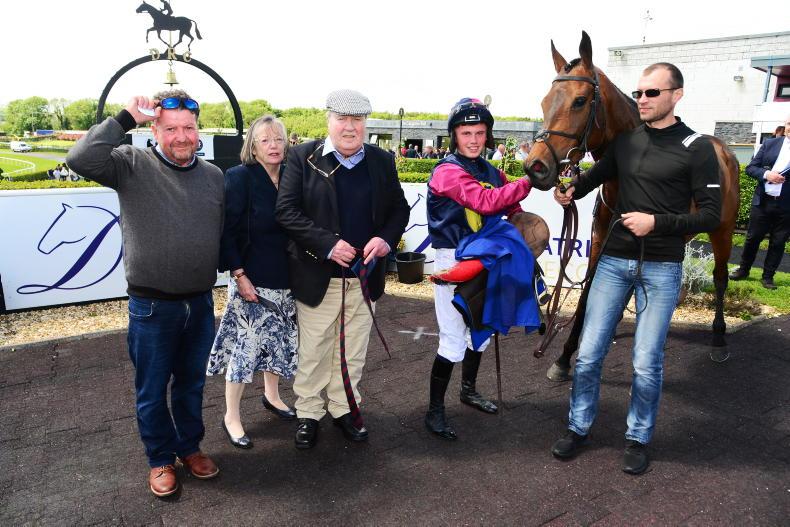 Mark Costello
FEATURE: Never mind the Chili Peppers, meet the 'Red Hot Owner Breeders'
From 'California' to 'Barcelona', Kevin and Marjorie McCarthy have been on a winning streak with Willie Mullins for 15 years