The son of Camelot delivered a power-packed finish, coming from last to first while the Ballydoyle maiden winner Espionage was also of note 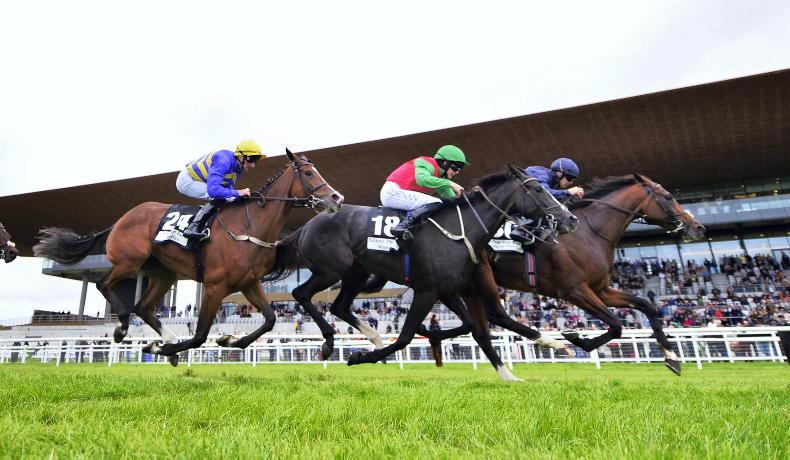 THE lure of a €324,000 first prize attracted a maximum field for the Friends Of The Curragh Irish Cesarewitch and it was an event which produced a remarkable performance from Waterville (106+) and Wayne Lordan.

The combination looked to be in a hopeless position turning for home before passing almost all of the 29 rivals they faced in the straight to deny the Willie Mullins pair of Echoes In Rain (106) and Lot Of Joy (105+) close home.

Aidan O’Brien described the winner as physically strong and mentally weak after the race, traits he exhibited on Sunday.

Lordan was happy to take a view of the field after breaking from stall 18 although I’m far from convinced the plan was to drop to last heading to the final mile.

However, the mental weakness displayed early on was eclipsed by an impressive finishing effort as the 5/1 favourite forged a path along the rail before delivering a power packed finish when in the clear passing the furlong marker.

The son of Camelot covered the ground from the three-furlong marker in 37.11secs which, given the time-figure, was a stunning effort. In comparison Zoffman (82) clocked 35.96secs for his sectional, although he covered less ground and was also granted a slow early gallop. To add further credence to the sectional, Basil Martini stopped the clock at 36.36 seconds from the same landmark.

Echoes In Rain was slightly inconvenienced in the home straight although not enough to alter the outcome of the race.

This was a career best on the level from the daughter of Authorized who could progress into a Stayers’ Hurdle contender if translating her stamina to hurdles.

Lot Of Joy was closer to her stablemate than at Galway and her effort can be upgraded further given she raced wide throughout from the widest stall.

Falcon Eight (104+) also ran with distinction, having been alongside the winner passing the three-furlong marker, he found his path blocked along the rail before finishing well into fifth. The seven-year-old still has a long-distance handicap in his legs.

Art Power (110) recorded back-to-back wins in the Group 3 Renaissance Stakes, dominating his field in the formative stages before surging clear to win decisively.

The time-figure was unrivalled on the straight track and a closing sectional of 39.89secs from the course intersection was only 0.04secs slower than Lord Massusus who was fastest on the day through the closing stages.

Tim Easterby’s grey used this race last season as a springboard to run well in the Sprint Stakes at Ascot on Champions Day and another bold show looks assured again if soft appears in the going description.

In covering the ground from the course intersection in 39.85secs, Lord Massusus (98) confirmed he was a well-handicapped horse heading to Listowel and he can continue to climb through the grades judged on this performance.

Basil Martini (95) won a hard-fought victory in the Group 3 Weld Park Stakes although the clock points to the performance of Espionage (99+) in the opening maiden to be of greater substance.

Aidan O’Brien’s colt was 0.41secs faster overall and confirmed the superiority with a closing sectional of 40.80secs; in comparison Basil Martini stopped the clock at 40.90secs.

Sierra Blanca (96+) finished strongly to secure a one-two for Ballydoyle and no doubt has a bright future ahead of him when tackling middle distances next season.

The same comment applies to Joseph O’Brien’s Dark Side (93+) who did his best work through the final furlong.

Devore (93) also clocked a quicker time than the Group 3 for fillies although the closing sectional of 42.17secs was the slowest on the day and portrays a pace collapse.

In the circumstances it may pay to give American Sonja (93+) another chance as she raced prominently throughout and may well have prevailed with a more patient ride.

Starry Heavens (86) posted an impressive closing sectional of 40.75secs as she routed her field in the mile maiden.

The overall time was the slowest of the day, confirming the visual impression of the early gallop being very slow.