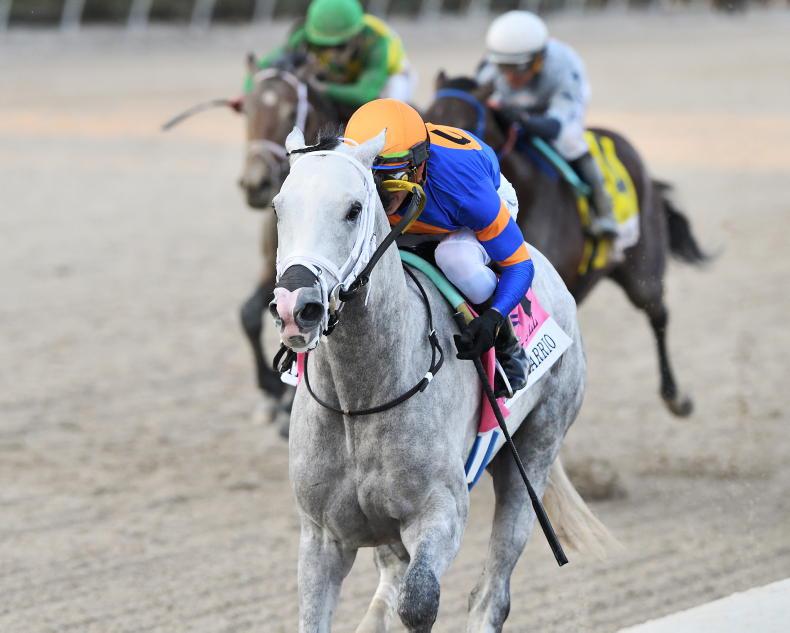 THE early-season Kentucky Derby preps continued last weekend but they are overshadowed by the ban by Churchill Downs on any runners trained by Bob Baffert.

The Baffert horses are still winning ‘trials’ but are not eligible to be awarded any of the points from those races. The placed horses are only given the points set out for the placings.

A hearing before the Kentucky stewards on Medina Spirit’s failed drug test after finishing first in the 2021 Derby has been pushed back to next week.

What happens if horses are moved from Baffert to another trainer before the classics is another element to be decided.

The highlight of the weekend away from the trials was the win in the Grade 2 San Pasqual for the five-year-old Express Train, trained by John Shirreffs and ridden by Victor Espinoza.

He also won this race last year on his way to the Grade 1 Santa Anita Handicap in March where he was a narrow second to Idol.

It was the fourth graded stakes win of his career following his victory in the December Grade 2 San Antonio Stakes and gave him 101 Beyer figure as the early favourite for the Big ’Cap.

Also on the Saturday card, the Baffert-trained Merneith upset the odds-on favourite Ce Ce in the Grade 2 Santa Monica Stakes for older fillies. The five-year-old daughter of American Pharoah won this for the second time, by three lengths, gaining a 102 Beyer figure in the process.

Ce Ce was making her first start since winning the Grade 1 Breeders’ Cup Filly & Mare Sprint and though she got on terms, Merneith refused to yield and pulled away to win by three lengths

The Grade 3 Holy Bull Stakes at Gulfstream Park over a mile and half a furlong was probably the strongest prep race on the Road to the Kentucky Derby contested so far this year and it went to the grey White Abarrio for jockey Tyler Gaffalione and trainer Saffie A Joseph Jr.

Second-placed Simplification was slow away, began to pick off opponents down the backstretch before flattening out somewhat out down the stretch.

The favourite Mo Donegal, well positioned into the first turn by Irad Ortiz Jr. after a slight stumble leaving the gate, also failed to keep pace with the winner.

“I’m very excited that he won as nicely as you could ask a horse to win a race, and it was the prep with the most depth so far,” Joseph told BloodHorse, with the Florida Derby next on his agenda.

“We missed a couple works. You would think he should improve off that (97 Beyer figure). When you have speed like that and can stay well, you put yourself in a good spot. Speed kills in dirt racing. To have that and also have the stamina to go long, it’s a strong combo to have.”

Bob Baffert also had the star performer on the Sunday at Santa Anita when the Uncle Mo filly Adare Manor put in another breathtaking performance to win the Grade 3 Las Virgenes Stakes over a mile by 13 lengths.

The Michael Petersen-owned three-year-old was a short-priced favourite in a field reduced to four. Baffert was impressed but she too did not earn any points towards the Kentucky Oaks.

In a similar performance earlier on the card, Baffert’s Messier raced through the stretch for a 15-length win in the Grade 3 Robert B. Lewis.

The Empire Maker colt got beaten twice at Los Alamitos but set the pace under pressure before drawing away easily under Johnny Velazquez to beat a distant Cabo Spirit.

There were two other early trials win Early Voting, a Gun Runner colt trained by Chad Brown, winning the Grade 3 Withers Stakes at Aqueduct for Klaravich Stables by four and a half lengths.

Meanwhile at Gulfstream, the Grade 3 Swale Stakes over seven furlongs was won by My Pranster, an Into Mischief colt trained by Todd Pletcher for Robert and Lawana Lewis.

A TOTAL of 312 three-year-olds were made eligible to compete in this year’s Triple Crown series when the early nomination phase closed January 29th. They include three trained in Britain and Ireland. The Dermot Weld-trained Fastnet Rock colt Enthrallment owned by Newtown Anner Stud, the Donnacha O’Brien-trained Absolute Ruler, in the ownership of Smith, Magnier, Tabor and Westerberg and the Saeed bin Suroor-trained Island Falcon.