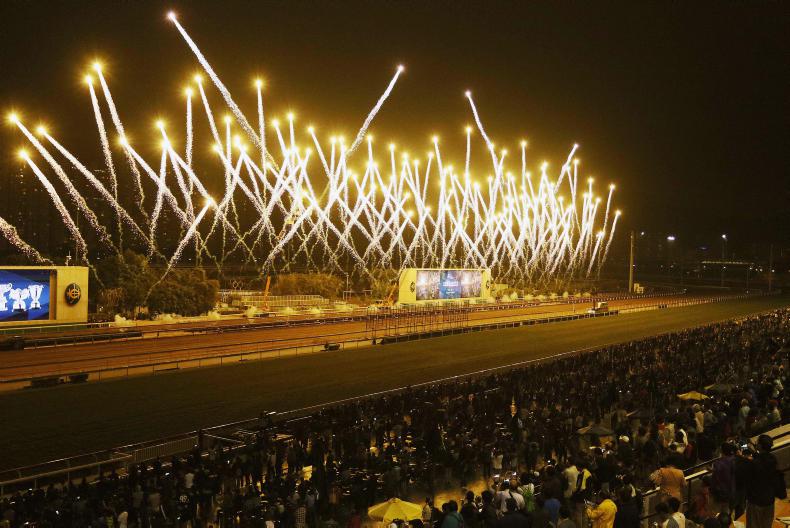 The Longines Hong Kong Cup. Racegoers are treated to a fireworks display for the closing ceremony for the International meeting (Photo: healyracing.ie)

Cloth Of Stars (=6), Ribchester (8) and Highland Reel (=9) rank in the top 10 in the latest edition of the Longines world’s best racehorse rankings.

The entries feature horses from 13 jurisdictions spanning five continents, and Japan has the largest bloc of overseas entries with 51 (13 more than in 2016). There are 17 horses from Australia are entered, which is a marked drop on the 30 engaged last year. The reduced Australian entry this time is due to the Australian government’s ongoing assessment of the Hong Kong Jockey Club’s protocols regarding horses travelling to and from its Conghua complex in the Chinese Mainland - at present, horses are required to complete 180 days in quarantine before returning to Australia. The entry features Group 1 winners Vega Magic and Redkirk Warrior.

Mr. Anthony Kelly, executive director of racing business and operations at the Hong Kong Jockey Club, said: “It is very pleasing to see such strong international and domestic representation among the entries for this year’s Longines Hong Kong international races, which is well-established as one of horseracing’s premier international occasions. The world’s elite horsemen clearly relish the challenge of Sha Tin in December.

“We are delighted to have received a very healthy number of entries with 26 more horses entered than last year, and nominations from Japan, Britain and Ireland noticeably up. Given the uncertainty created by the ongoing situation about horses travelling to and from Australia to Hong Kong, it isn’t surprising to see their number of entries reduced for this renewal. It is a mark of the event’s draw that 17 Australian horses have nonetheless been entered.

“The calibre of horses that have been nominated gives a clear indication of the quality we can expect to enjoy at this year’s Turf World Championships. The countdown has started to the second Sunday in December and there is palpable excitement at the prospect of seeing stars like Ribchester, Highland Reel, Neorealism, Cloth Of Stars, Librisa Breeze and Real Steel take on Hong Kong’s world class gallopers on Sha Tin’s famous turf.”

The Cup, first staged in 1988, and the oldest of Hong Kong’s international races, may also feature Britain’s Decorated Knight who has landed three Group 1s this season, including the Irish Champion Stakes (2000m). Japan’s three-year-old crop could be represented by classic winner Al Ain, successful in the Group 1 Satsuki Sho (2000m) in April. New Zealand star Gingernuts, who numbers Australia’s Rosehill Guineas among his three Group 1 scores is engaged in the Cup and the Longines Hong Kong Vase (2400m), as is the top-class British mare Blond Me. The last two winners of South Africa’s Group 1 Sun Met are also entered, the mare Smart Call and this year’s victor, Whisky Baron, who holds entries in the Cup and the Longines Hong Kong Mile.

Local hero Beauty Only is entered to defend his Group 1 Longines Hong Kong Mile crown. The contest, which has 81 first stage entries - six more than last year - carries a lucrative purse of HK$23 million, making it the richest turf mile on the planet.

World class entries also include Godolphin’s Ribchester, a four-time Group 1 winner in Europe and only once out of the first three in 15 career starts; Ireland’s Aidan O’Brien-trained Roly Poly, a triple Group 1-winner this term; Aclaim, winner of the Group 1 Prix de la Foret (1400m) last start; Satono Aladdin, seventh in the race last year and subsequently successful in the Group 1 Yasuda Kinen (1600m) at Tokyo in June; Group 1 Victoria Mile winner Admire Lead, also from Japan; and Suedois, best known as a high-class sprinter in Europe until earning a breakthrough Group 1 win in the Shadwell Turf Mile at Keeneland last start. Hong Kong-trained horses have won 10 of the last 11 editions and last year’s runner-up Helene Paragon is entered again, as are the third and fourth home, Joyful Trinity and two-time Group 1 winner Contentment.

French-trained runners have won the HK$18 million Longines Hong Kong Vase (2400m) 10 times. Master trainer Andre Fabre succeeded with Borgia in 1999 and Flintshire in 2014, and this year he has Arc runner-up and Group 1 winner Cloth Of Stars among the 76 entries - 12 more than 2016. The four-year-old found only the super filly Enable too good for him at Chantilly last time.

Highland Reel won this in 2015 and was a fine second last year when Japan took the spoils with Satono Crown. This time the last two winners of Japan’s St Leger could lead the charge - Kiseki (2017) and Satono Diamond (2016): the latter landed the Group 1 Arima Kinen (2500m) last December but was below par on soft ground in the Arc most recently. Godolphin’s Group 1 Eclipse Stakes (2000m) winner Hawkbill is also entered, as is Highland Reel’s stablemate, the Group 1-winning filly Seventh Heaven.