Purebred Irish Draught stallion, Steeped In Luck, made history by becoming the first of his breed to compete at three-star dressage level 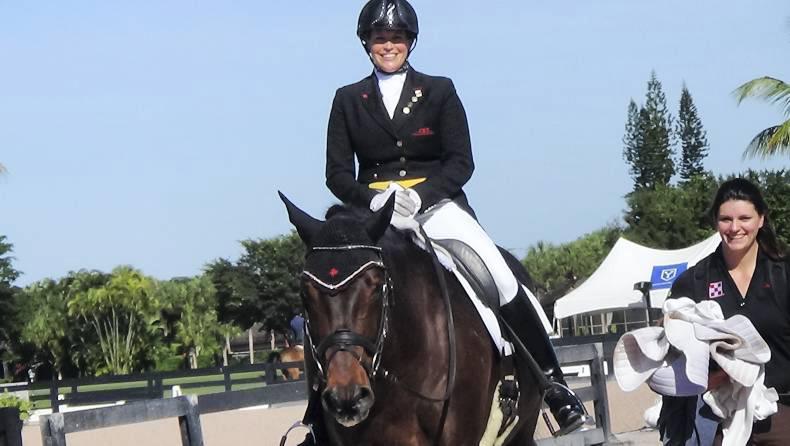 Purebred Irish Draught stallion, Steeped In Luck, who is making history in the dressage ring

A PUREBRED Irish Draught stallion made history today (Wednesday) by becoming the first of his breed to compete at three-star level in an international dressage competition.

Steeped In Luck, by Mount Diamond Flag, was partnered with Canadian dressage rider Denielle Gallagher in the CDI*** Grand Prix at the Adequan Global Dressage Festival in Wellington, Florida, to finish on a score of 59.8 percent.

Speaking to The Irish Field, Gallagher, who has only recently taken over the ride on the bay stallion, said: “Eamon (Steeped In Luck) was wonderful today. We had a very clean test – the highlight would be his piaffe and tempi changes. He is a wonderful sweet horse and tries very hard.

“He was relaxed in the ring and gave me everything I asked for. We had a huge crowd cheering for him when we halted. I am so proud!”

The 14-year-old stallion was bred by James Lee in Co Louth and was sold to Keith and Elizabeth Douglas of Pairadox Farm in Ontario in 2002. A fully approved Irish Draught stallion, he was sourced for them by Eamon McArdle of Drumhowan Stud in Co Monaghan. When the dressage star arrived to his new home in Canada, he was pet named ‘Eamon’ as a tribute to McArdle.

His success in the competition ring has earned him a one-star rating from Horse Sport Ireland based on performance. Steeped In Luck is out of Steeple View, whose dam line traces back to Ginger Dick. He is from a pedigree that is rich in performance bloodlines, including King of Diamonds and Pride of Shaunlara.

The stallion’s breeding lines have a strong jumping background, however, he has consistently demonstrated his versatility showing against some of North America's finest dressage prospects, coming home with a ribbon from almost every show.

Keith Douglas told The Irish Field that Steeped In Luck will continue to compete in Wellington this season. “It is an honour to be competing amongst these top ranking riders and horses with an Irish Draught. I am very happy that he has reached this level, he tries very hard and is a willing partner to Denielle. I am looking forward to watching the pair compete again soon in Wellington."