Just one final step...
You must confirm your email address by clicking on the link we’ve sent to your email address.
You are only one short step away from reading 5 free Field+ articles.
VIDEO: Curragh success for Elysium and A Step Too Far

Noel Meade’s Elysium caused a minor upset in the Weld Park Stakes at the Curragh on Sunday.

Elysium records her second career success after powering down the outside to win the Group 3 Weld Park Stakes for @wjlee24786 and @tuvastables ???? pic.twitter.com/wYGd83sU7f

A field of 10 juvenile fillies faced the starter in the seven-furlong Group 3, with the Jessica Harrington-trained No Speak Alexander the 3/1 favourite after finishing second in a listed event at Leopardstown on Irish Champions Weekend.

Elysium, a daughter of Belardo, was rated 17lb inferior to the market leader, having been placed in a couple of conditions races since opening her account at Navan in June.

However, ridden by Billy Lee, the 12/1 shot raised her game significantly to claim victory by a length and a half from Aunty Bridy – providing her multiple champion jumps trainer with a rare pattern success on the flat.

Thinking Of You beat No Speak Alexander to third place by a nose.

Meade said: “Some people might be surprised by that, but I’m not. She’s been showing me that all the time at home – and I thought we’d nothing to lose by running here, because if she got into the shake-up she’d be worth a few quid.

“Billy said he got a bump coming out of the gate, and it lit her up a bit. He was able to stick her in and get her relaxed again – and he couldn’t believe how she picked up.

“I own a piece of her myself, along with two friends. We bought four two-year-olds with the idea of selling them, so I would be surprised if the money comes that we don’t sell.

“It’s a while since we had a group race winner on the flat, but we’ve not had too many runners.”

SIX IN A ROW

A Step Too Far completed a six-timer in the Heffernan Tyres Joe McGrath Handicap.

Marvellous stuff - it's sixth straight success for one of the stories of the season, A Step Too Far who adds another chapter taking the Heffernan Tyres Joe McGrath Handicap for Adam Farragher and Kieran Cotter ???? pic.twitter.com/S4jaXZFc0u

The Footstepsinthesand filly was rated just 48 when joining Kieran Cotter from Peter Fahey’s yard earlier this year, but lined up for her latest assignment on a mark of 85 following wins at Naas, Navan and Cork and two more at Bellewstown.

Ridden by 7lb claimer Adam Farragher, the 11/2 chance saw off Beckwith Place by half a length.

Cotter said: “This was the long-term target, up to six weeks ago. She’s answered every call, and there’s nothing (more) I can say about her now. She’s just incredibly tough.

“She has just got better and better. We do nothing with her at home between races. You just couldn’t, because if you put a saddle on her she just wants to go a hundred miles an hour. We’re looking at the Mercury Stakes at Dundalk over five furlongs now as a possibility.”

The 4/1 shot was opening her account at the fourth attempt for the father-and-son combination of Gerry and Colin Keane.

Colin Keane said: “She’s improved from run to run. The last day, she was still green and ran around.

She’s not the most straightforward, but the penny is starting to drop with her, and it’s nice to get her a winning bracket.” 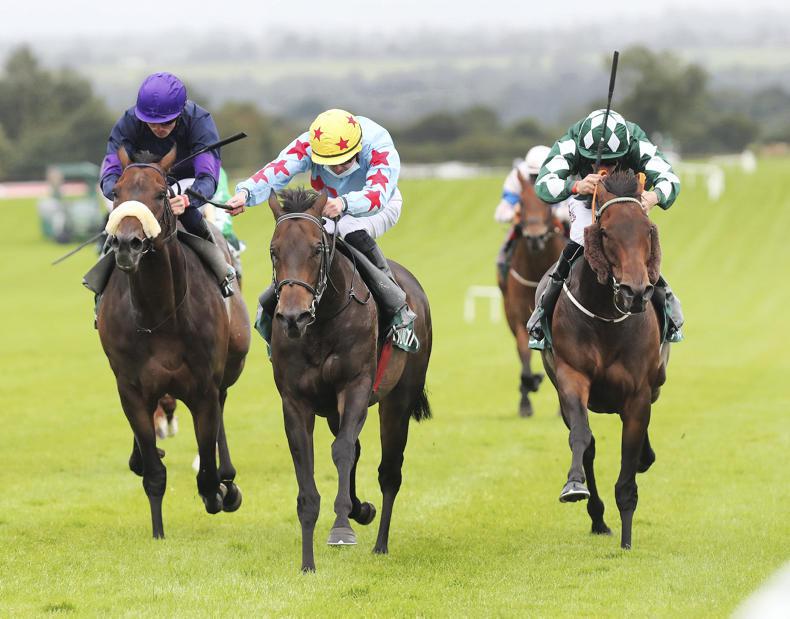 Inside Racing
NAVAN SATURDAY: No stopping Step Too Far
By Gary Carson on 07 September 2020
More in Latest News
News FREE
NEWS: Wembley could score for O'Brien among seven Futurity entries
News FREE
NEWS: Heffernan takes over on Princess Zoe in Royal-Oak
News FREE
CHELTENHAM: Search for sponsors for Grade 1 novice chases at Cheltenham
Classifieds
Place ad
Get full unlimited access to our content and archive.
Subscribe to The Irish Field
Unlimited access to The Irish Field via your computer, mobile device, tablet or newspaper delivered to your door.
Subscribe now +
Already a subscriber? Sign in