Present Soldier, who saved some ground on the inner turning into the home straight, stormed to the front inside the final 50 yards 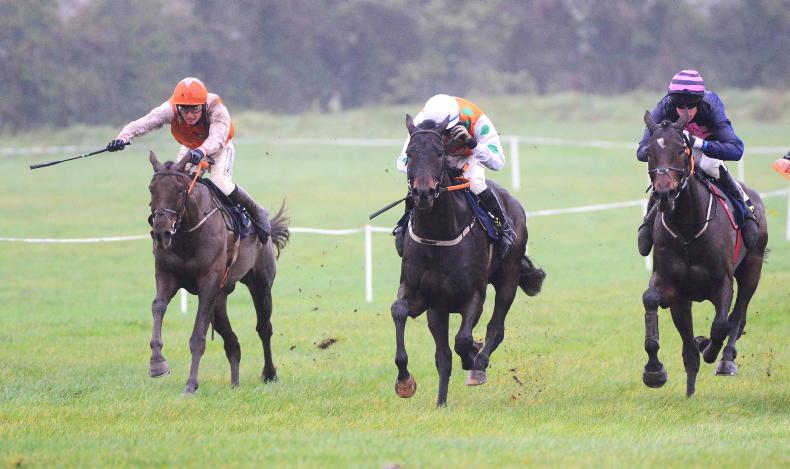 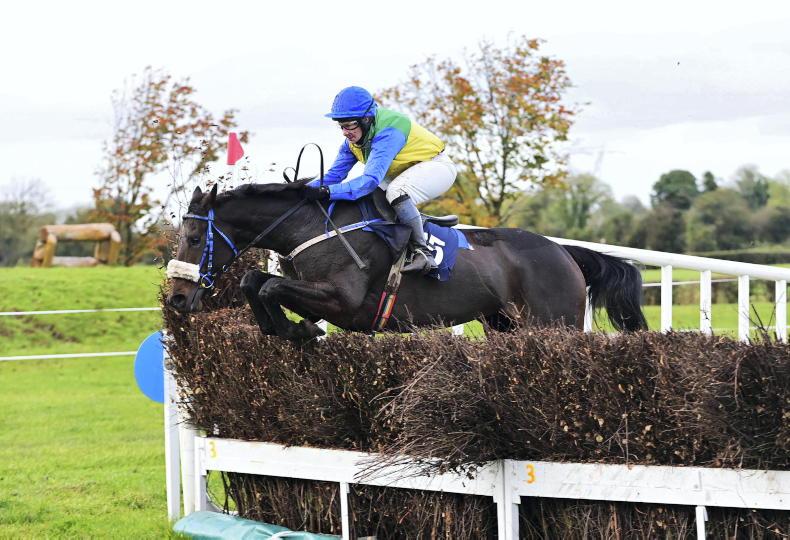 THE Louth Foxhounds stepped into the void created by the cancelation of last weekend’s fixtures at Lisronagh and Tinahely by putting on a meeting at Tattersalls Farm on Saturday.

Much appreciated by those within the sport, there was an abundance of talent on display with Denis Murphy’s newcomer Present Soldier posting a taking debut success in the second division of the four-year-old geldings’ maiden.

Present Soldier (6/1 - 5/1) was covered up by Luke Murphy in mid-division as Forcing Bull took the 11 runners along and Arctic Bresil, leading when unseating two out in Curraghmore less than two weeks earlier, made a decisive move by going to the front after the fourth last of the 13 fences.

Arctic Bresil had company from after three out in the form of newcomers Master Chewy and An Mhi with the winning son of Presenting trying to make his way into contention in fourth spot. It was Arctic Bresil who still held a narrow advantage at the final fence.

Present Soldier, who saved some ground on the inner turning into the home straight, stormed to the front inside the final 50 yards to deny the gallant Arctic Bresil by three-quarters of a length.

Master Chewy served notice that his turn is imminent by returning a similar margin adrift in third spot in a race that’s likely to see plenty of winners emerge over the coming weeks.

“Luke gave him a very good ride and he will now go to the sale in Cheltenham,” said owner/trainer Murphy of Present Soldier, a son of the Grade 2-winning chasing mare Noras Fancy from the same family as The Bosses Oscar and Alaphilippe bought for €33,000 at Goffs as a foal.

Competition was likewise intense in the first division of this race, a contest that saw five horses either fall, get brought down or unseat, and the Donnchadh Doyle-trained newcomer Monbeg Park impressed by overcoming greenness to land the spoils in the hands of Rob James.

The patiently ridden Monbeg Park (5/2), a son of Walk In The Park whose unraced dam is an own-sister to Hidden Cyclone, made progress from the fifth last and he went second behind Snowy Evening on the approach to two out.

Monbeg Park took the measure of Snowy Evening before the last and he returned with three lengths to spare over Ellen Doyle’s representative, the pair finishing five lengths clear of the third-placed Zaidi.

The towering Monbeg Park, a €65,000 Goffs Land Rover Sale graduate representing the Monbeg Syndicate, was also due to be offered at last night’s Tattersalls Cheltenham Sale.

Donnchadh Doyle’s brother Sean attained some compensation for the eclipse of Arctic Bresil by sending out another first-timer in Monbeg Lane to win the five-year-old geldings’ maiden, the race which attracted the biggest field of the afternoon in 18 runners.

Recent Loughanmore runner-up Glengeever set out with the intention of making all and Gerald Quinn’s charge still seemed the most likely winner running to the last.

Glengeever however blundered here, losing valuable momentum and Monbeg Lane (4/1) seized his opportunity by sweeping past the long-time leader in the closing stages to oblige by two lengths under Jamie Scallan.

The Monbeg Partnership-owned Monbeg Lane, an embryonic chasing type by Milan who is a half-brother to Donald McCain’s listed-winning mare Lastbutnotleast, was bought for €88,000 at the 2019 Derby Sale and he too was destined for last night’s Cheltenham sale.

THE Claire O’Connell-trained Glen Ava recorded a poignant success in the five-year-old mares’ maiden as Glen Ava (6/1) was the last animal to run in the colours of her handler’s late mother Betty O’Connell, who sadly passed away two weeks earlier.

In a race that saw the sweet-travelling Aubis Walk being forced out when running short of racing room on the inner just before two out, Glen Ava mastered newcomer Hello Arlene from the last to score by a head under Paul Bannon in what was the closest finish of the afternoon.

Glen Ava was homebred by her handler’s husband Paul O’Callaghan and O’Connell paid tribute to rider Bannon for his assistance over the past few difficult weeks.

Notnowlinda (5/1), having travelled smoothly, went for her race after four out. The winning daughter of Notnowcato aided her cause by throwing fabulous leaps over the final two fences and she asserted in the closing stages to see off Queens Rock by two lengths. Notnowlinda, sporting the silks of Motherway’s wife Linda, hails from the same family as Ottowa and Calling Brave.

LIAM Lennon kept the northern contingent happy by sending out School Lane, a four-time runner-up over fences, to make a victorious return to points’ duty under a confident Noel McParlan in the winners-of-one.

Exit Eleven edged ahead after four out, but he was shadowed by a sweet-travelling School Lane (7/1) approaching two out.

The 93-rated chaser School Lane is owned by Caoimhe O’Hare, who works with Lennon but who was away for the weekend in Liverpool.

Willie Murphy will have attained immense satisfaction from the success of his mare Rose Of Coolbally (6/1) in the six-year-old and upwards maiden for novice riders as she was partnered by his wife Moira McElligott.

The seasonal debutante, owned by breeder Peter Tyrrell, picked up the running before the last to dismiss Knockiel Synge by two lengths.

Arctic Bresil (S.T. Doyle): Having unseated two out when leading at Curraghmore, this giant-sized son of Blue Bresil went down fighting when finishing second to Present Soldier in the second division of the four-year-old geldings’ maiden.