Just one final step...
You must confirm your email address by clicking on the link we’ve sent to your email address.
You are only one short step away from reading 5 free Field+ articles.
Siyarafina all set for Prix de Diane

SIYARAFINA is set to put her unbeaten record on the line in the Group 1 Prix de Diane at Chantilly.

Alain de Royer-Dupre’s filly claimed her third win from as many starts when justifying odds-on favouritism in the Group 1 Prix Saint-Alary at ParisLongchamp – her first appearance over a mile and a quarter following successive victories over a mile.

She holds an entry in the Coronation Stakes over the mile at Royal Ascot, but she will remain at 10 furlongs and bid for classic glory on June 16th.

Georges Rimaud, manager of owner-breeder the Aga Khan’s French studs, said: “She is going for the French Oaks in a couple of weeks. She has come out of her last race in good form.

“It was great for her to win a Group 1, and she proved she stays the mile and a quarter – or very close to it.

“Her pedigree would indicate she might not stay much further, but we’ll see. She is very easy to ride, which might help her stay a bit further.” 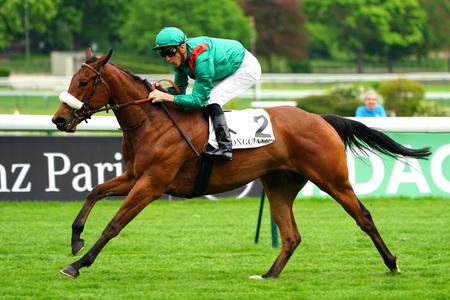