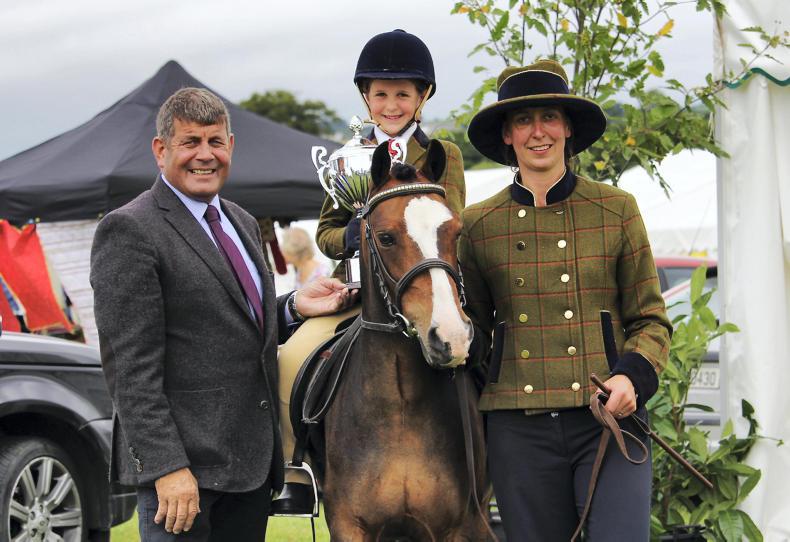 Winning that first cup is always the most memorable and young Emily Simmons had hers presented to her by Minister of State Andrew Doyle with proud mum Lorraine holding the family's versatile pony Killenagh Rose at Carnew show (Photo: Susan Finnerty)

CARNEW bounced back on the show calendar and this year’s show turned out be a day of firsts, particularly for the Simmons family from Wexford.

Their multitasking pony Killenagh Rose won a lead rein class with Emily, then was whisked away to line out in the mounted games team, this time with her sister Laura on board. The winning streak continued as the pair, plus her brother Harry with his pony Beauty, were on the victorious Wexford team.

And to cap their day, older sister Emma was on the third-placed junior games team before entering the side-saddle class with her equally versatile pony Charlie.

“We had a great day in Carnew and would highly recommend this show for families to travel to and support this show,” said their mother Lorraine. “Emily is still smiling as she has the biggest trophy in the house.”

That was her lead rein prize, presented by local TD and Junior Agriculture Minister Andrew Doyle, who said in his official opening speech that he has been going to gymkhanas around the Wicklow/Wexford area since he was eight years old.

Clohamon Stud owner Michael Murphy is another regular on the show scene and was a proud grandfather last Saturday when his grand-daughter Matilda won her first red rosette in another lead rein class on her pony Dawn.

WELL done to the Dream Team of Madelaine Gervais of Ballydavid House, Carol Gee of Fernhill Sport Horses and Ger O’Brien of Raheen na Gun who all did brilliantly at a recent show in Deauville on the international ambassadors’ circuit, racking up many wins and placings between them at the popular French venue.

“We enjoyed many wins and placings and then to come second in the Nations Cup, we were all thrilled. It was great fun, really true sport,’’ said Co Waterford-based Madelaine.

Committing the cardinal sin of forgetting the other half’s birthday will never happen in the Sloyan household as both Seamus and Aisling’s birthdays fall on the same day! The newlyweds, who depart for their Australian honeymoon after Dublin Horse Show, had another reason to celebrate last weekend as following their combined birthday celebrations on Saturday, their Irish Draught mare Elm View had a clean sweep at Louisburgh the following day.