Just one final step...
You must confirm your email address by clicking on the link we’ve sent to your email address.
You are only one short step away from reading 5 free Field+ articles.
NEWS: 'This is not sustainable'

NEWS: 'This is not sustainable'
By Mark Costello on 01 September 2020
Racecourses fire warning over sharp fall in revenue as racing is set to continue behind closed doors for the forseeable future

THE chairman of the Association of Irish Racecourses [AIR] is “very concerned” over the viability of tracks unless the traditional revenue streams of racegoer admission fees and corporate bookings return in the coming months.

Conor O’Neill is manager of Punchestown as well as AIR chairman and he sits on the board of Horse Racing Ireland. He said: “The longer the current scenario continues, the greater the financial deterioration will be for racecourses.

“So far, the media rights revenue has held up relatively well, though there is uncertainty over the possibility of further betting shop closures in Ireland and the UK, which would significantly affect media rights payments.

“It is that uncertainty that also prevents you from making plans. For example, at Punchestown we would normally be commencing our ticket and corporate hospitality sales at this stage for the 2021 festival, particularly for our UK and overseas clients, which make up over 20% of our overall attendees. They would all traditionally book in September and October. Obviously we can’t do that this year, as nobody knows when we will have racegoers back and how many will be allowed.

“I think it’s very difficult to envisage that the 2021 Punchestown Festival will take place as normal but the extent of that impact currently remains unknown; again it’s that uncertainty which is proving to be the biggest challenge. The primary focus in the meantime is to ensure we don’t haemorrhage money until we have a degree of certainty that we can work with. However unfortunately we must wait and see as to what extent restrictions are likely to pertain at the stage and that is a very similar scenario for a lot of other racecourses as well.”

O’Neill said that the media rights money, reported to be down 25% since the resumption, is helping racecourses to cover costs at the moment but the best any track can hope for is to not lose money when it stages racing behind closed doors. “The problem is that this is not sustainable. Racing behind closed doors does not generate sufficient income to make the required impact on the overheads a racecourse has.”

Bigger tracks are likely to feel the pain more quickly than smaller ones, O’Neill believes. “All racecourses are vulnerable but, generally speaking, those tracks that rely on crowds would be the ones that will feel the pinch sooner than others.”

Leopardstown Racecourse has staged 11 meetings in 10 weeks behind closed doors. Relatively new CEO Tim Husbands said: “As a HRI-affiliated track, we are acutely aware of our responsibility to stage racing. It has been quite a test but, working with HRI and the IHRB, it has been a seamless delivery.

“The next priority is to make those fixtures as financially efficient as we can. As Conor rightly says, this is more challenging for the larger racecourses. In the longer term, as an industry there is a real for need the racing public to return, not only for the Racecourses, but for the industry, the sport, and indeed the racegoers. In the meantime, we are planning for every eventuality.

“It will ultimately be down to Government in liaison with HRI and the IHRB but we are putting plans in place to ensure that when we can return we are in the best position to manage however many that may be, be it 1,000 racegoers or 5,000. The racegoer experience and expectation of this is likely to be very different initially, so we are looking to see how we could do things differently, but our infrastructure is good and we are confident we will be able to deliver.”

The Irish Field understands that several Grade 1 tracks have already let full-time staff go, while smaller tracks, which tend to be run chiefly by a smaller number of people, have not been as badly affected.

“Look at the bigger meetings which have been either lost or closed to the public – the Fairyhouse and Punchestown Festivals were cancelled. Galway, Listowel and Irish Champions Weekend all run without racegoers. They are massive losses.

Looking ahead, O’Neill expects race sponsorships and corporate client bookings to be “extremely tricky”. He said: “If a business is making staff redundant then they are not going to be purchasing corporate hospitality or sponsoring races, that’s the reality. A lot of the benefits associated with the raceday experience are not there when you race behind closed doors. We have not yet seen the full impact of the epidemic on the economy, so businesses will be mindful of their spending.”

O’Neill had nothing but praise for the way in which Horse Racing Ireland and the Irish Horseracing Regulatory Board have managed to keep racing going in recent months, and he said there is work going on behind the scenes preparing for the return of racehorse owners to the track, though the racing authorities are reliant on the Government’s view on restrictions with regard to attendances at sporting events.

“I completely understand the frustration of racehorse owners who have been kept away from the track for almost six months now. From a track’s perspective, we acknowledge appreciate the integral role they play in keeping horses in training and racing them.

“In fairness to HRI and the IHRB, they have done a fantastic job to have racing continuing and it is not to be taken for granted. But they have to abide by the Government guidelines and the longer the current situation continues the harder it will be for racecourses to stay open.”

The 2021 fixture list is currently being drafted and O’Neill says he is not aware of any racecourse which has signalled it won’t be able to race. “Racecourses are very conscious of the role they play in the industry but, from a commercial perspective, it is very difficult for them to commit to fixtures with such uncertainty around all their income streams. Not one of them is certain.”

Emma Meehan, manager of Down Royal, said: “Racing behind closed doors was welcome, as it allowed us one income stream where there was one. But the reality is that media rights income only covers operating costs and maintains cashflow. There are huge below-the-line costs, such as security, cleaning and even the maintenance of buildings which aren’t been used. A racecourse is like the Parthenon and there is only one pillar holding it up at the moment.”

Down Royal’s staff have benefited from the Northern Ireland executive’s furlough scheme but this is due to end in October and it is uncertain what supports will be available after that date. “That is a concern,” Meehan said. “I have a strong team and I need them back in full employment, but we are in limbo at the moment.”

Roscommon manager Michael Finneran says his track is in a relatively good financial position. “We have to make repayments in respect of our new weighroom development but they are small in comparison to the bank obligations that the big tracks have. That’s where you really have problems.”

British racecourses are forecast to lose up to £300 million in revenue this year alone, mostly from racegoers and sponsors, and they are bracing themselves for an even worse 2021. “Crowds are the key, not media rights” said David Armstrong , head of the Racecourse Association (RCA), adding that media rights accounted for just 25% of British racecourse revenues.

Owners and bookmakers are already back on British tracks, and racegoers will return for a trial at the four-day St Leger meeting in Doncaster. Over 3,500 will be admitted on Wednesday, September 9th, followed by 6,200 on each of the next three days.

Punchestown recently joined Cork Racecourse in offering its facilities to the HSE as a Covid-19 testing centre. Punchestown’s event centre has been adapted into a drive-through and several hundred tests are being carried out each day. 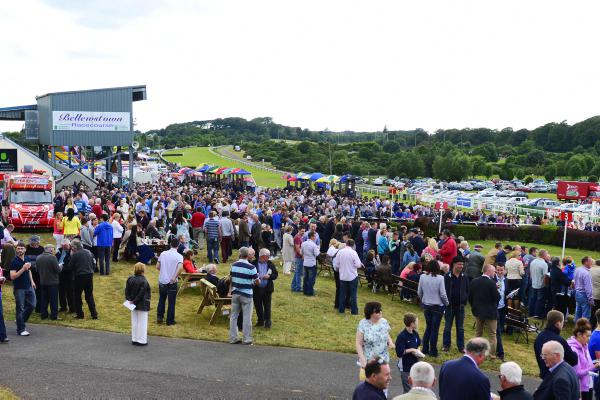 Racing News
Treatment of owners in Ireland
By Kevin Blake on 09 July 2014
More in Latest News
News FREE
SALES: Aunty Bridy heads opening day of December Mare Sale
News FREE
Walk In The Mill on course to bid for Becher hat-trick
News FREE
Skelton all set for Tingle Creek on Politologue
Classifieds
Place ad
Get full unlimited access to our content and archive.
Subscribe to The Irish Field
Unlimited access to The Irish Field via your computer, mobile device, tablet or newspaper delivered to your door.
Subscribe now +
Already a subscriber? Sign in