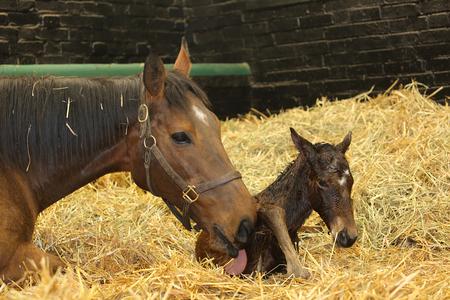 KIND, the dam of unbeaten superstar Frankel, has died due to complications after foaling a colt by Kingman.

The 20-year-old mare gave birth to her colt on March 2nd, but owners Juddmonte announced her death on Monday.

Kind leaves a substantial legacy with five stallion sons at stud, headed by Frankel – a 10-time Group 1 winner, who retired in 2011 with a perfect record of 14 wins in as many starts for the late Sir Henry Cecil.

Frankel’s full-brother Noble Mission was a three-time Group 1 winner – including the 2014 Champion Stakes – while Bullet Train, a half-sibling by Sadler’s Wells, counted a Group 3 Derby trial win on his record.

Kind’s sons Morpheus and Proconsul also stand at stud, while her daughter Joyeuse and granddaughters Jubiloso and Jovial are in the Juddmonte broodmare band. Her three-year-old Galileo filly Chiasma – a full-sister to Frankel – is currently in training with John Gosden.

Kind, who was twice a listed winner in her racing days, is on the IFHA’s International List of Protected Names because of her achievements in producing two Group 1 winners.

Stud director UK Simon Mockridge said: “I cannot thank the Rossdales and Juddmonte team enough for the tireless care they have given Kind.

“To many she will rightfully always be best remembered as the dam of Frankel and Noble Mission – to us at Juddmonte, she will always be Kind by name and Kind by nature.”