Title: MARGIE McLOONE: Christie had wind in his sails! 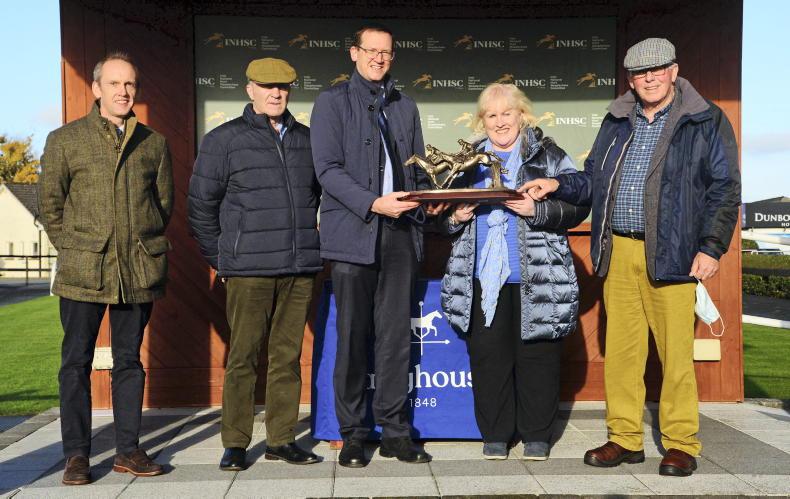 THE six-year-old Vaucelet, easily the youngest and least experienced horse in the four-runner field, comfortably justified his position as 11/10 favourite when landing the INHSC Supporting Point-To-Points Hunters’ Chase at Fairyhouse on Tuesday.

Ridden by Barry O’Neill, as he had been when making his successful seasonal debut in an open at Portrush last month, the Authorized gelding was winning for the fourth time in five starts since joining the David Christie yard prior to the start of the 2020/21 campaign.

His sole defeat came on his debut for the Derrylin trainer when beaten a head by Brayhill in a five-year-old maiden at the same Portrush fixture last season.

The French-bred bay wasn’t seen after that until winning a maiden hunters’ chase at Down Royal in early May. Later that month, he landed the prestigious Champion Novice Hunters’ Chase for the John Corbet Cup at Stratford when he accounted for the Tom Ellis-trained/Jack Andrews-partnered favourite, Fumet D’Oudairies, by two and three-quarter lengths. In both instances Christie’s charge was ridden by Ben Harvey.

Vaucelet, who was led up on Tuesday by Christie’s son and namesake, runs for the well-known Co Antrim couple Jennifer O’Kane and John Hegarty whose support party at Fairyhouse included David and Doris Kells who also have horses in training at Leginn House Stables.

Last Saturday at Aintree, there were roughly as many supporters present when Koshari got up close home under Jonathan Moore to win the Pertemps Network Handicap Hurdle (Series qualifier) by a neck. Making his debut for the Christie yard, he was sent off as the 80/1 outsider in the 11-runner field.

First trained in his native France by Yannick Fouin, for whom he won a three-year-old hurdle, and then up to recently by Willie Mullins, for whom he won three further hurdle races and two chases, the nine-year-old is a son of Walk In The Park whose yearlings and foals proved popular at Tattersalls Ireland’s November National Hunt Sale this week.

Koshari is owned by Kieran Mahon and Noel Keenan who, on their first visit to a British racecourse, were accompanied to the meeting by members of the O’Reilly family.

All were entertained royally by Aintree and, having backed their winner, had a day they will never forget. “I was delighted for them all, they had an unbelievable time,” said Christie, “and it was brilliant for Jonathan who rides out for me.”

David was going to lead the horse up himself but his daughter Amy, who was due to travel home to Co Fermanagh for a few days anyway, decided to call in to Aintree en route to take up her old stable duties. A sports physiotherapist based in London, Amy did get to lead up a winner but, by day’s end, may have rued her decision to change her plans!

“We were due to get the 10.30pm ferry from Liverpool when, just as we were about to board, the captain decided that no livestock could be carried because of the weather out at sea,” reported David.

“The port at Birkenhead is only about 30 minutes from Aintree so I gave Amy Martin, who is the stable manager at the track a call and, even though she was already home, she very kindly returned to open up the stable yard for Koshari and the hostel for Amy and myself. We were back at the port for the 10.30 sailing on Saturday morning.”