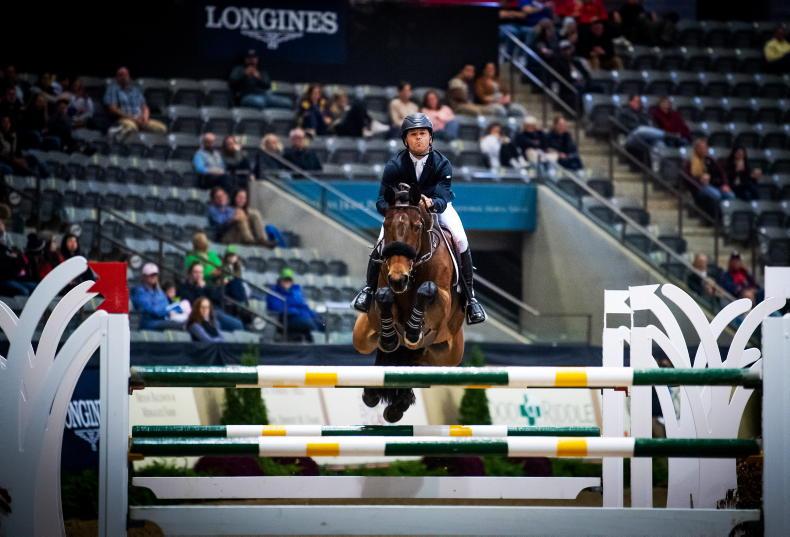 In a thrilling nine-horse jump-off, the world number seven produced the only clear in the second round to win aboard the brilliant 15-year-old mare Gazelle, who he brought to the Tokyo 2020 Olympic Games.

Those who went early in the jump-off all faulted and, as the penultimate rider in the ring, Farrington changed his plan to ride for a clear round without pushing for the time over Bernardo Costa Cabral’s (POR) shortened course.

The move paid off, and he and his longtime partner swept to the top of the leaderboard and remained there. The only double-clear performers of the evening, their winning time was 35.96 seconds. His compatriot McLain Ward and his silver medal-winning Olympic mount Contagious finished second (4/32.60), with Israel’s Daniel Bluman and Ladriano Z third (4/32.62).

“It changed my strategy a lot,” Farrington said. “I only had one rider after me, so I thought a neat clear was a smarter play.

“In the first round, she was hyper careful, so it took a bit of jockeying around,” Farrington said. “I thought the jump-off was a good opportunity to let her settle down and go for a cruise. Luckily, that paid off for me with the win.”

Farrington and Gazelle have been partnered for eight years, and their list of accolades is lengthy. But at 15, the mare still has more to give.

“This is an experienced horse. She’s been an amazing horse for me and my career,” Farrington said. “[Her co-owner] Robin Parsky has been supportive of my management of this horse, and that’s part of what has made her last so long.”

Just off the podium in fourth was Tiffany Foster (CAN) and Figor, who just a week ago took the win at Washington (USA). Foster’s third top-five finish of the season in the North American League propelled her to the top of the standings with 42 points.

Ireland’s Conor Swail sits second after winning the first two legs of the season at Vancouver and Sacramento with 37 points, while Farrington moved into third with 32 points.