Title: HUNTING - Fingal Harriers: The thrill of the chase 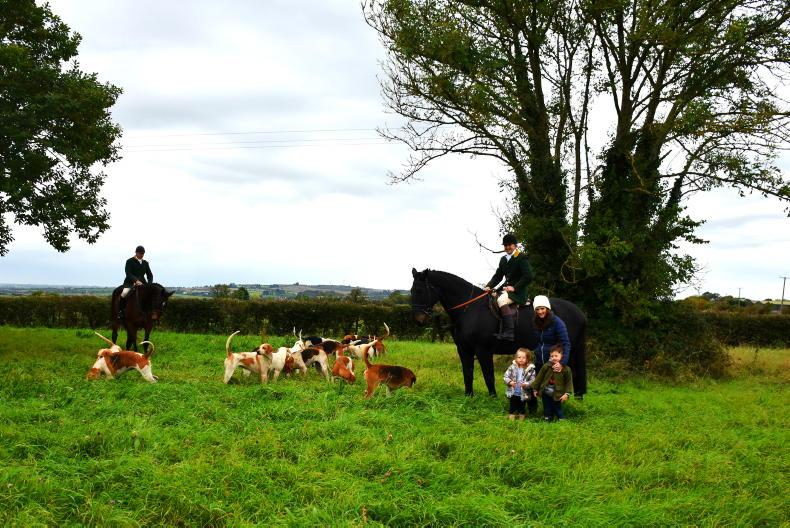 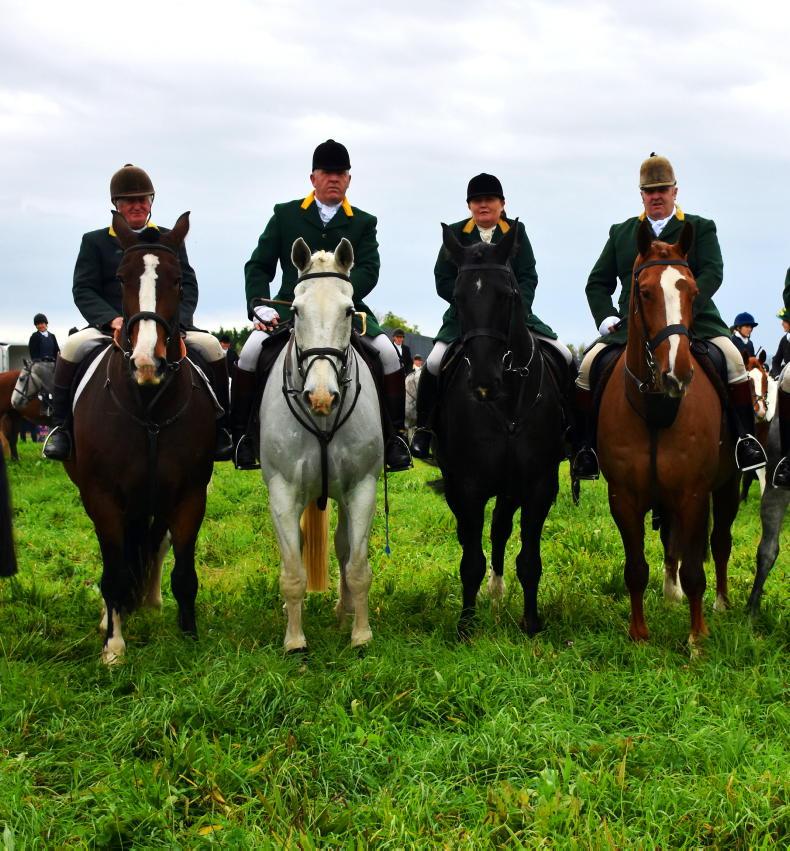 THE future looks bright for the Fingal Harriers as, at a recent meet at the award-winning Man O War Bar & Restaurant, it was notable especially that there were nine teenagers and two adults out for their first day’s hunting, which represented 20% of the total hunt followers on the day!

They were all immaculately turned out, all from farming stock and arrived from the same yard of local landowner Paul Rice.

Paul himself was out for his first day on familiar ground with his daughters Caoimhe and Aisling with support from their mother Sharon, his sister Marie and her daughter Georgina.

Also out was Robyn Murray, whose mother Sheila was on hand and whose father Paul was a previous joint-master. Charlie Harford, Nicole Harford and Julia White, a daughter of another tillage farmer Barry White whose father Pat was also a past Fingal master, were all hunting for the first time.

Another local Naul tillage farmer Joe McNally loaned one of his hunters to Paul, but he was also providing ground support to his wife Aisling and son Harry who rode at the head of the field all day, a natural horseman who was also hunting for the first time.

His daughter Sarah is also a natural at the game. All the children had mutual support and would be friends of each other from competing in Pony Club events and local shows.

Unfortunately the huntsman Chris Smith of the Fingal Harriers was temporarily out of action but hopes to be back soon. So it was great to see one of the new joint-masters and whipper-in Stephen Comerford available to hunt the pack. Amateur whippers-in give so much of their valuable time to hunts without any recompense that this is really the only reward aside from working with hounds all year around.

But over the years the Fingals have been fortunate to have had adequate back-up huntsmen which come from their whippers-ins who have spent time in the kennels getting to know the hounds. I remember joint-masters Larry McGuinness and Joe Duff standing in for the then huntsman Paddy Shanahan. They were not noted as hound men but more successful as point-to-point riders, and their duet on the hunting horn did sound a bit strange!

But Duff and McGuinness were difficult to stay with crossing country, and if they got any head start, you just could not see where they crossed a ditch as they would take off from a distance on a really big one and they could nip inside briars and take off and not leave a mark on the ground.

We had a member who was extolling the virtues of his horse as a match for Duff and McGuinness’ hunters so I suggested that he go with them, laying a drag over a tight piece of ground.

The said member came back to the field ashen-faced with fright having given up on Duff and McGuinness saying that he could not believe what they took on! I myself have had the pleasure of hunting the Fingal Harriers on many occasions in my 20 seasons whipping-in, and looked forward to every single opportunity. Others I remember hunting the Fingals were Tom White, Jill Revell, Helena Dawson, PJ Casey and now at the most recent meet, farrier and joint-master Stephen Comerford at the Man O War Meet, ably supported by Joey Moore, Darren Jordan and Helena Dawson.

Interestingly local horse trainer Ado McGuinness, an outstanding horseman in his own right from his international show jumping days with his sister Nuala, also whipped-in to the pack. He has had so much success with A Case Of You winning the Group 1 Prix de l’Abbaye at ParisLongchamp before contesting the $1 million Breeders’ Cup Turf Sprint at Del Mar in California.

There are a number of new joint-masters this season: Orla Gannon of Gerrardstown Stud, who is a sister-in-law of Tony Gannon, former master of the North Galway Hounds, Seamus McGrath, a brother of Fingal joint-master Michael McGrath, and Stephen Comerford who has served as honorary whipper-in for a number of seasons.

To complete the mastership line-up is Brian Beggan who has been in office for nearly 30 seasons. Brian’s Alfie is one of many of his hunters, Nancy (who stopped to graze on top of the RDS Bank in the Hunt Chase!), Nig, Honky and now Ted and Alfie. They all had one thing in common, they were laid back with automatic gears, and Brian enjoys his summers swimming with them off Gormanstown beach.

Cricket in this area goes together with Gaelic Football. The current England T20 Cricket captain is Eoin Morgan. Although born in nearby Rush, his family hailed from across the road from the Man O War Bar. He was the architect and hero of the England World Cup winning team in 2019 when they rescued the trophy after so many disappointing years beating New Zealand in a remarkable final. He also plays in the Indian Premier League with Kolkata Knight Riders.

Aside from the newcomers, there was a large contingent on horseback, among them Martin McNulty, owner of The Man O War Pub & Restaurant which is one on the oldest pubs in Ireland operating since 1595, and on the first toll road in the the British Isles established from an Act of 1732. The motto of this thatched pub is ‘Here’s to your roof, may it be well thatched, and here’s to all under it, may they be well matched’.

The huntsman moved off from the back of the pub into Bernice Jones’. Her father Johnny was a great supporter of cricket and GAA in the local Man O War Club. From there they circled over some nice ditches into Farrell’s and Joe Rooney’s.

After a breather, they crossed the road near Hedgestown School and then on to Courtlough Shooting Grounds which is a favourite venue for clay pigeon shooting, corporate challenges and family entertainment outdoors with its own water park, and trout fishing. The owner Bill Flynn’s father, Richard, was an Irish Olympian, representing Ireland in clay pigeon shooting.

Hounds took them on a nice spin to Balrothery all the way up by Kearney’s Tree, better known as being on the Killalane Annual Motorcycle road race circuit, and into Barry White’s conacre. They crossed Everard’s, Joe Clinton’s and into Murtagh’s and back cross-country through Clinton’s to the meet. Adults and children out hunting for their first time were still to the fore, surviving the day with great support from each other and smiles all around.

Proprietor Martin McNulty is a generous host and he had a roaring fire on in his Man O War Bar – not that it was needed with the weather so mild – where the followers were treated to tasty refreshments. 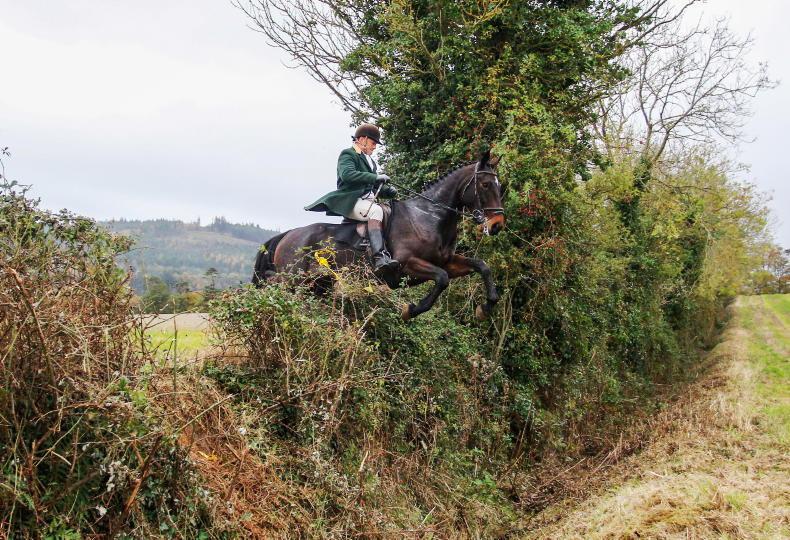 Irish Field Contributor
PICTURE DESK: Out and About
Horses, hounds and riders of all ages are out enjoying the countryside 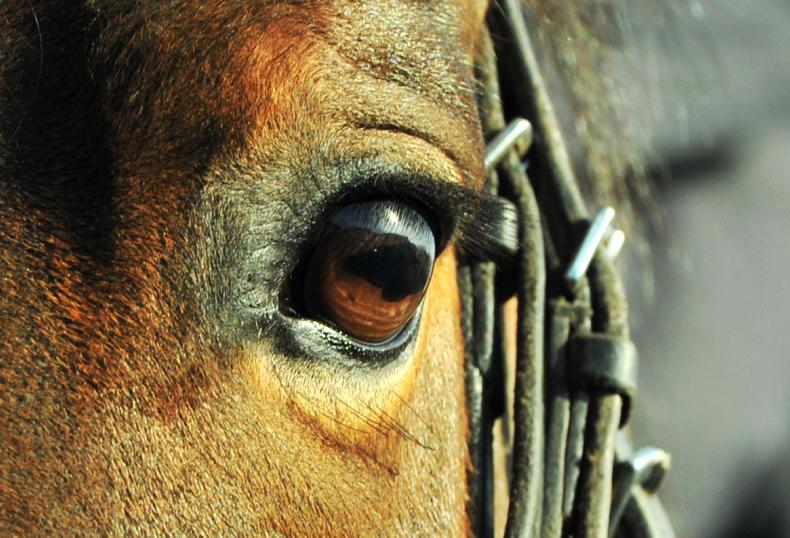 AROUND THE COUNTRY: Over €17,000 raised for Jigsaw at Fingal ride
The Fingal Harriers held a charity ride in memory of local girl Emma Bruton 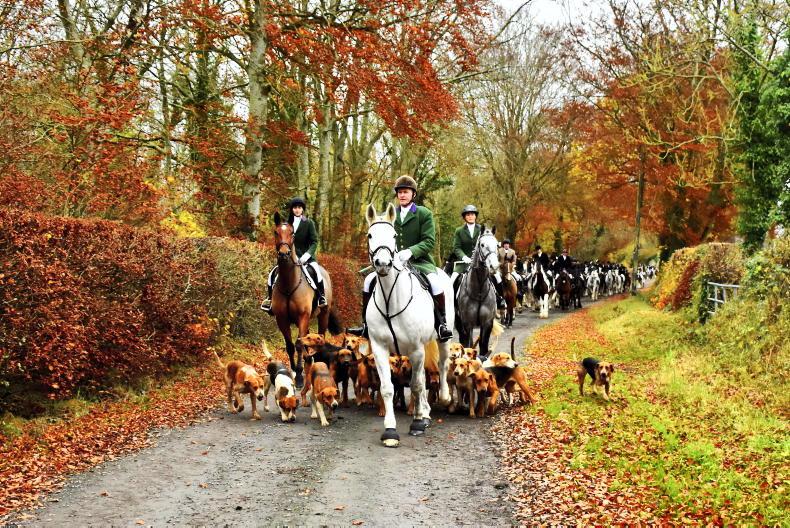 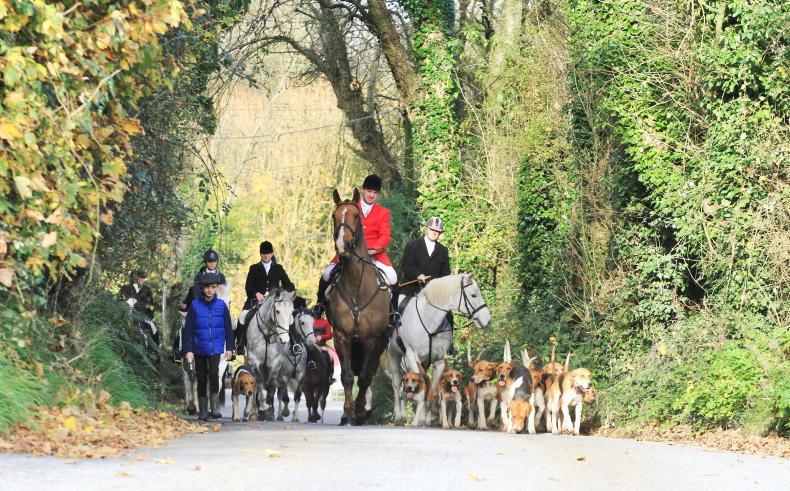