Title: HEART OF RACING: 'Dad has been a huge help to me' 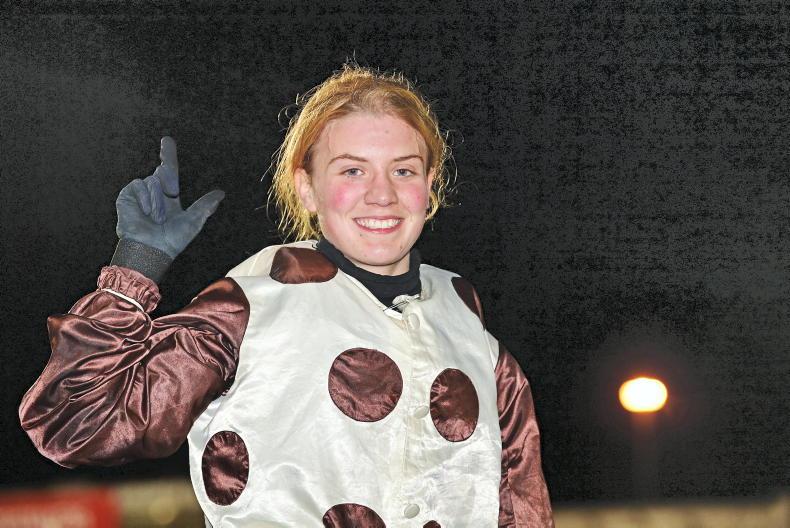 I LED up Try Again when he won his very first race at Dundalk in January 2017. He went on to win his next two after that, before adding a further four career wins. At that point, I had just started riding a couple of quiet horses at home but never had any ambitions of becoming a jockey. Fast forward to last Wednesday night and Power Drive gave me another memorable night at Dundalk, when crediting me with my first winner on the racecourse. My dad was a successful jump jockey in Britain but I was too young to remember him riding. He made a very brief comeback in 2013, riding The Ring Is King to win on the flat at Ballinrobe. He thought that no-one else could win on that horse, so he took out the licence specifically! Although I was still in primary school, I remember that he got a great buzz out of it, as he had done plenty of wasting and training just to make the weight.

Two years earlier, Dad enjoyed the biggest success of his training career to date when sending out Moon Dice to win the Galway Hurdle. Again, similar to The Ring Is King, I would have been aware of the significance of the win but at the time, I had no great interest in horses.

Having failed miserably the few times I sat on ponies as a child, I had little or no involvement for much of my teenage years. It was only about three years ago, when I started to help out at the races and lead up a few horses, that I began to think about riding. Apart from Try Again at Dundalk, I took particular satisfaction leading up Jackie Ellis at Hamilton as she was owned by my grandfather.

With a newfound confidence, I got a pony of my own and later completed the six-week riding course at RACE. Dad has obviously been a huge help to me as he has been there and done it all.

Tom Geogheon, who rides out for us, has also been a great support. He has ridden point-to-point winners and is always available to offer me advice.

Since I took out the licence and started to ride on the track, David Bean has put in so much work going through races and providing me with feedback. I am fortunate to have three good men in my corner.

After I finished my Leaving Certificate, I decided to take a year out as I wasn’t sure what I wanted to do. I got relatively good marks but nothing particularly appealed to me.

Starting off riding a couple of quiet ones such as Chasing Abbey or Steel Ambition, I eventually got to the stage where I was able to sit on any horse in the yard.

About a year ago, Dad asked me what weight I was – I think he thought I was much heavier! He suggested that I take out my licence, even just to ride a couple of our own on the track.

It was something that had never occurred to me up until then but I decided to give it a go. Covid put paid to my initial plans, so I only ended up getting the licence in May of this year. To date, I have only ridden four or five different horses; all trained by my dad.

Power Drive, a two-time winner for Charles O’Brien had had a couple of setbacks over the years but we always loved him. He ran well for me at Dundalk on his previous start but was just that bit keen, having needed the run. Dad went through the race with me last week and advised me to be handy but not get into a battle.

Thankfully, we were left alone out in front and that enabled the horse to get into a lovely rhythm during the race. I had plenty left when the field started to close inside the last furlong as he kept on strongly.

I have to thank John Eastwood, owner of Power Drive, for giving me the opportunity on the horse. Without his loyalty and support I would still be waiting on that first win.

At the moment, I am working at home in the yard full-time. We have about 15 horses in for the winter; a mix of Dundalk and National Hunt horses.

There are a few more due to come in shortly, as we have breakers and yearlings as well. Hopefully I can get going for the winter now and maybe pick up a few outside rides on the back of the win.

I know it’s hard for trainers to convince an owner to put up a jockey that hasn’t ridden a winner, so Power Drive has certainly helped me in that regard. It would be great to ride for different trainers and build up contacts.

For now, at least, I am going to enjoy the Dundalk win and work hard to ensure we have a few more over the coming months.

Ciara Flynn was in conversation with John O’Riordan