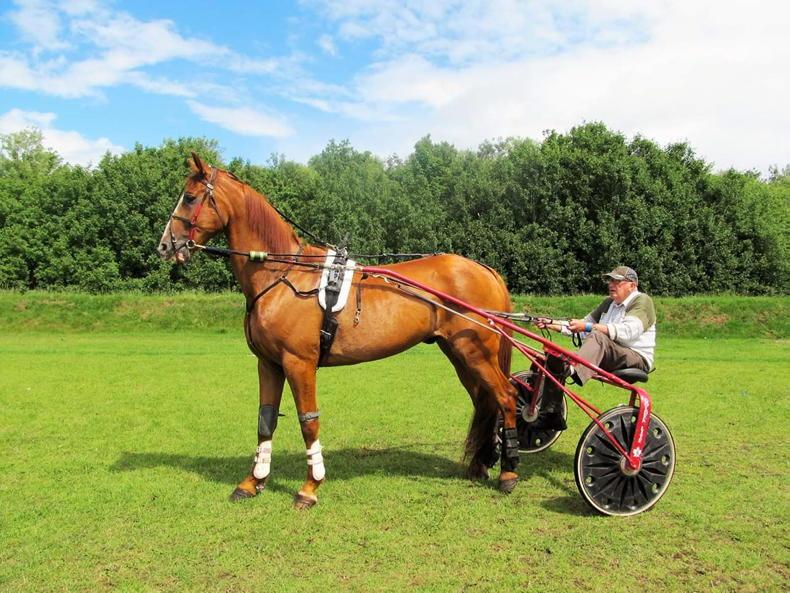 John Menzies warming up Quarillon d' Or at a meeting 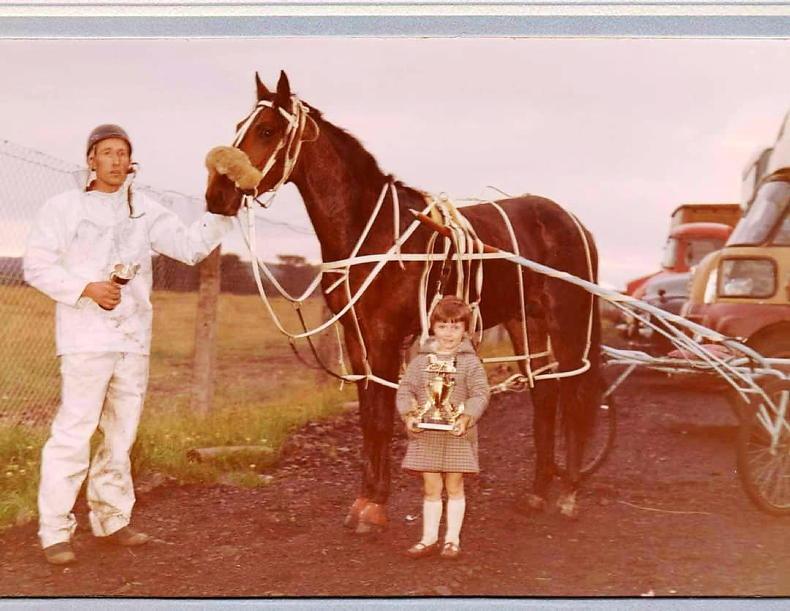 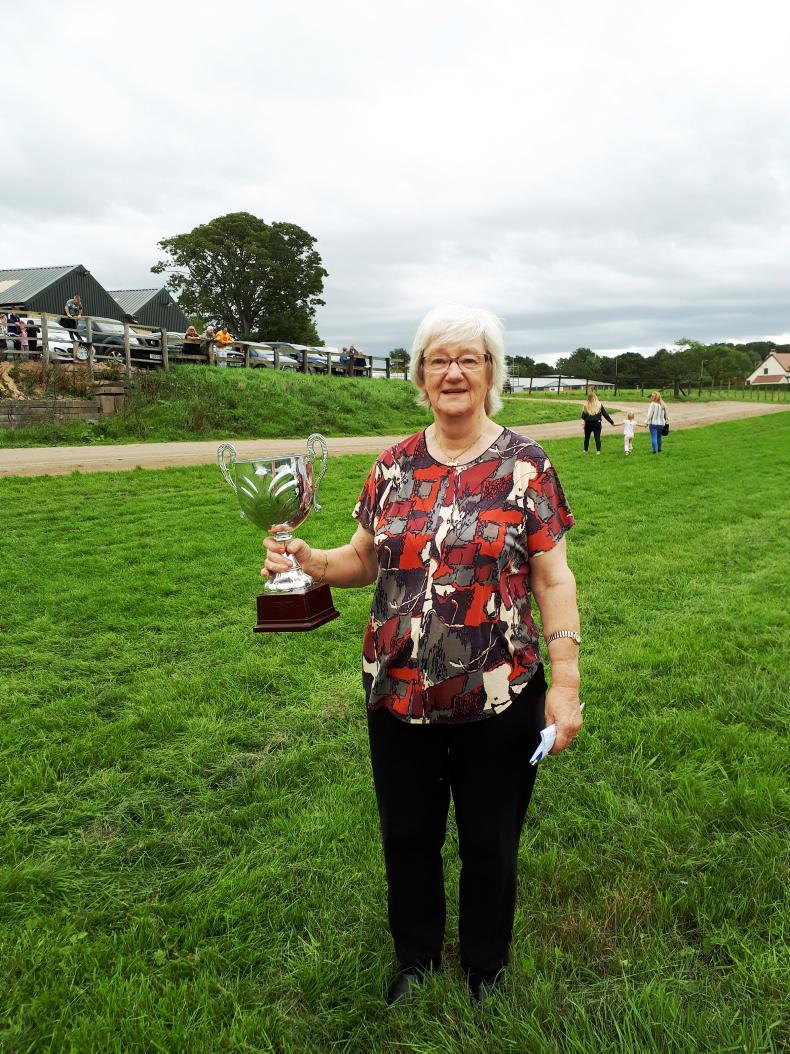 IRISH harness horsemen have had Scotland firmly in their thoughts in recent weeks. For over 20 years the threat of closure has loomed over the charming little track at Bannockburn, Corbie Wood Stadium.

Following a series of ‘gallows’ reprieves over the years, the Scottish Harness Racing Club got notice to quit the site before Christmas. A feast of nostalgia filled social media with one name dominating Scottish trotting over six decades: John Penman Menzies.

John Menzies drove a treble on the opening night at Corbie Wood in 1966 and drove his last winner at the venue in 2007 with Ladyford Lad.

In a 50-year career, John drove in the region of 1,000 winners and won the blue riband of British Harness Racing, the Famous Musselburgh Pace five times.

John spoke to The Irish Field during the week. The interview was a bittersweet conversation, recalling Menzies’ steely resolve on the track but with the ever-present thought of the stables at his local track deserted and the developers’ diggers due on-site next week.

In short, the track was sold for building. Just like at Manchester, Kendal, Prestatyn and Lambeg previously, the trotting community found that 20 acres of flat ground near a large town will always be worth more than harness racing can muster. Corbie Wood regular Bernard McGovern has been posting a short history of the track on social media. Trotting in Scotland can be traced to Edwardian times. It is important that a hard track can be re-established in the Central Region.

On some positive notes Bannockburn landowner Hamish Muirhead has made his grass track at Haugh Field venue available for some extra meetings in 2022. The SHRC are in negotiations with local authorities and fund raising has commenced.

John Menzies at 82 is as sharp as ever and was in reflective mood. He will supervise the training of All Right Jeff, a gorgeous son of Rogue Hall in the incoming season. The horse lost a race in the stewards’ caravan at Appleby last year before picking up a late season final at Corbie Wood.

John originally went to work as a mechanic for Will Cowan of Slammanan around 1956. In the 1950’s saddle jockeys took part in the same races as sulky drivers. Will Cowan put John up on a few pacers ‘because I was so light’ and a terrible beauty was born, as the poet said.

In the days before foundation of the British Harness Racing Club, and even in its early days, there were many ‘gaff’ meetings in Scotland.

The term applies to a meeting as part of an agricultural show or the local Highland Games.

The tracks were tiny, three and four laps to a mile. John won dozens of races at places with quaint names like Alva, Keith and Bridge of Allan. An interesting feature of the Menzies success story was that many of his winners were for smaller owners or owner breeders.

John and his owners specialised in growing their own and he gained a reputation for straightening out wayward horses.

“Dillys Decision would never have made the races only for dad,” says son Gregor, himself a successful driver. “He spent hours with that horse, he was impossible to yoke at the start.”

Behind every man there is a good woman, or should we say ‘alongside’. John married Will Cowan’s daughter Myra in 1964 and she often fed and tended the stock while John held down his own business in haulage. Eventually he concentrated on the sulky as opposed to horseback.

Dan Carlin: You have always had a good few Irish owners?

John Menzies: The first was Kenneth Hanna, he sent us Saunders Star Wars. I got an awful fall at Musselburgh off Saunders Star Wars. I chose to follow a horse that wouldn’t jump the road in the back straight. He jumped it and brought me down with him. Kenneth died tragically young a few years later.

Later we had horses for Billy Gallagher and Tommy Blair. I would do anything for Gerry Hawkins. He sold us Shandy Hill and Dan Murphy. I drove Dan Murphy to win the centenary meeting at Appleby.

DC: What was the best horse you drove?

JM: There were so many decent ones and each one different. Scottish Express, Scottish Blaze. Liz’s Boy was some horse but a doubtful stayer. With the various wind operations they can do nowadays he’d have been even better. Ponco Tom used to trail 120 yards at Corbie Wood and still be involved in the finish.

Saunders Signal went to Canada. We bred Catchmeifyoucam ourselves and he was one of the first horses to go two minutes twice in the same afternoon.

DC: Corbie Wood kept changing hands, who were the best owners for the sport?

JM: I thought it had the best chance when the Ogilvies owned the place, or the Raeburns. Davy Morton spent a lot of money on the facilities.

DC: Should the SHRC have bought the track?

JM: They missed their chance. Plus, the stable rents at the track were a bit too cheap. If the SHRC had charged say £30 per stable per week they might have a nest egg by now.

DC: Apart from your five Musselburgh wins, what else are you proud of?

JM: I won Appleby four times. Our own Dan Murphy, No Regrets for Davy Morton, Tumbleweed for Paddy Maughan from Irvinestown and Saunders Signal.

Five wins in the Famous

Scottish Express (1978). We were so confident. It was his first run of the year and he was a top-class horse off an easy mark. An awfully easy winner.

Eastwood Limelight (1979). A total shock. She was in foal when she won. She was in heat 12 and only got an hour to recover. They called the foal I Was There and she did not make the races.

Yankee Adios (1981). A family winner for my father-in-law. He was an old war horse. He was a pleasant surprise. He sired some nice horses later.

Point Blank (1988). My favourite win in the race as I gave him no chance at all. We tried him at Lanark, also grass, a week previously and he went horribly. Horses, who can tell?

Klondyke Girl (2001). We bred her and sold her to Peter Lyttle of Newtownards. Peter asked me to drive her. She was second in her heat. I had to check her and the crupper came off. A top-class mare especially over a distance.