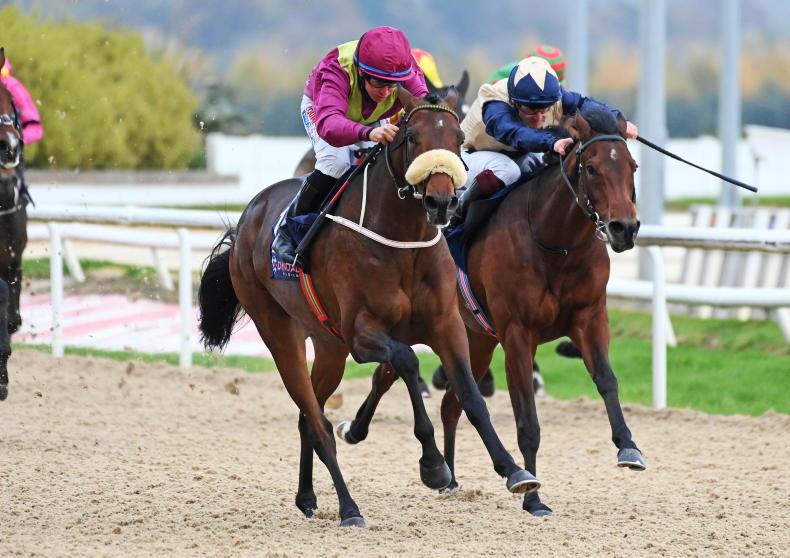 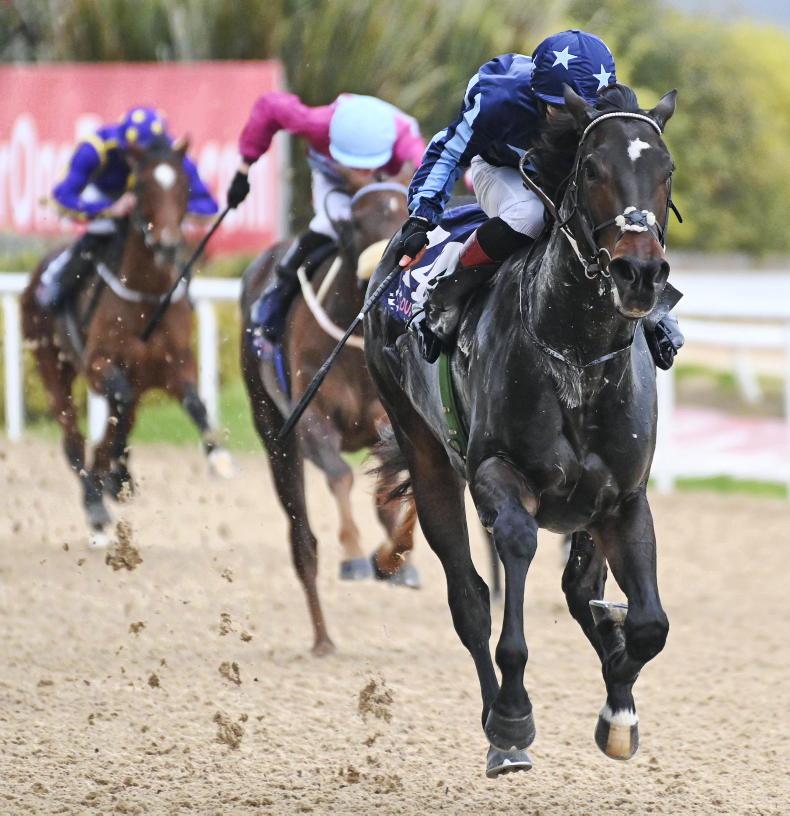 MICHAEL Halford could have quite a smart prospect on his hands in Crystal City who progressed especially well from an unplaced debut several months ago to shock the 1/6 favourite Ultramarine in the median auction maiden over seven furlongs.

Ultramarine set a strong standard on his fourth in the National Stakes and he held every chance turning for home but he couldn’t match the smart looking winner.

The victorious first reserve asserted in likeable fashion for Niall McCullagh over the last furlong and a half to defeat the market leader by a length and a quarter.

Owned and bred by HRI Chairman Nicky Hartery, Crystal City was backed from 14/1 into 11/2 on course to build on his midfield finish in a useful Gowran maiden in August.

“He’s a smashing horse. I liked him a lot before he ran first time out but he got a bit lost around Gowran and just weakened out on me so we took our time with him,” said Halford. “Niall said he’ll improve a lot, he had a good blow there and ran around a bit in front. It’s nice to get a two-year-old race with him as his future is all ahead of him.”

This race did also feature a running and riding enquiry into the effort of the 11th-placed Aghaboy which resulted in trainer Kevin Prendergast being fined €2,000 and 10lb claimer Jessica O’Gorman being suspended for 10 days while the horse was banned from racing for 42 days under Rule 212 A (ii)

Luke Comer has his team in good shape and he notched up another winner when Bradesco (11/2) won the two-mile handicap under Chris Hayes.

After reaching the frame in a heavy ground Galway handicap last month, this lightly raced four-year-old coped well with this much better surface.

Most of the field looked to be in with a chance as the last couple of furlongs loomed but the Comer-owned homebred soon stamped his authority on the race to score by three and a quarter lengths.

A day to remember

IT was an afternoon to remember for local trainer Michael Rice who sent out his first winner when Picpoul sprang a 50/1 surprise in the first division of the 45-65 rated mile-and-a-half handicap. A sixth winner for apprentice Jamie Powell, the three-year-old daughter of Gale Force Ten was never far off the pace and launched a strong rally over the last furlong and a half which carried her clear of the field for a near three-length victory over last week’s course winner Power Drive.

“I’ve been trying a couple of years and if you keep trying you’ll get there. I train over in Ravensdale which is only seven or eight minutes away. She’s a bad traveller so we wouldn’t be travelling too far with her and she’ll be back here again,” reported Rice who picked up his charge for €1,000 as a yearling.

The other division of that handicap went to Ciaran Murphy as Shamardalah, a 7,000gns recruit from the Tattersalls July Sale, got off the mark on her third Irish start. Luke McAteer was on board this three-year-old and was backed from 25/1 into 16/1 on track before getting home by half a length from Duleek Street. The winner is owned by Colman O’Flynn.

The card concluded with a winner for Ger Lyons and Gary Carroll as Flyin Hawaiian (10/1) landed the three-year-old 45-70 rated handicap over 10-furlongs.

A 10-race maiden coming into this race, the David Spratt, Sean Jones and Lynne Lyons-owned son of Free Eagle took charge of this race in the last furlong to defeat Spirituoso by a length and a half.

A Lolly good show by Yeats

AFTER shaping with promise on her four starts over the course of the 2021 season, the Kevin Coleman-trained Lolly Yeats (9/4) made short work of her rivals in the three-year-old mile maiden.

Mikey Sheehy made the running on this daughter of Lawman, who is owned by the trainer’s mother Eileen, and the pair were untroubled at all stages to come home just under four lengths ahead of Gudrid.

“She is a good filly. I thought a lot of her and she ran a blinder at the Curragh the first time but then I ran her back too quick the next time and she wasn’t quite right. Then she ran well at Roscommon and last time she colicked on the way home,” declared the trainer. “I think she could get blacktype somewhere and she needs good ground.”

Tony Martin’s Akhlaaq (10/1) looked as though he might be a horse to follow on the polytrack this winter with a smooth success in the 45-70 rated mile handicap.

A winner at Leopardstown in April before losing his way, the seven-year-old showed signs of returning to form with a second in a claimer at this track last month and he progressed again to score with plenty to spare.

Robbie Colgan’s mount was travelling best of all as he eased into contention entering the last quarter of a mile and he didn’t need much encouragement to settle the issue over the last furlong, defeating Harbanaker by a length.

“He’s in great form and it’s great for the man that owns him, Dave Field, who is a real good fella. He stuck with him as the horse hasn’t been the easiest,” stated Martin.

“He did it well there and the last day was grand whereas before you could never get two good runs into him. Hopefully now we might be on a bit of a roll with him.”