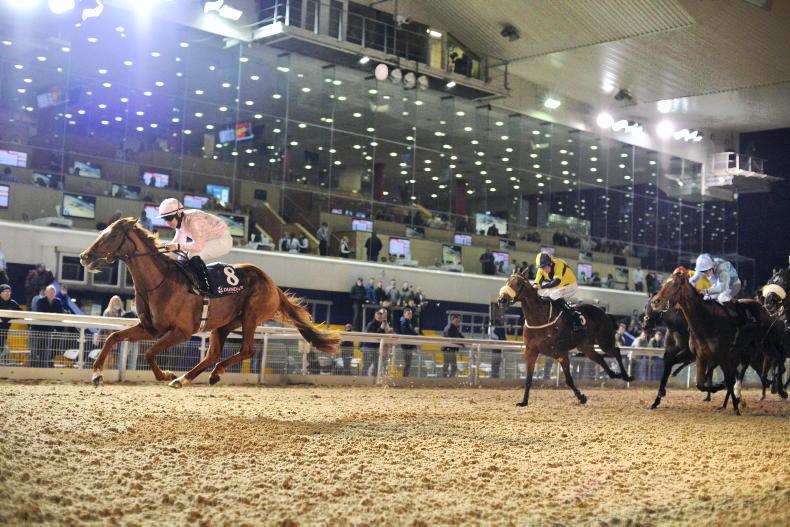 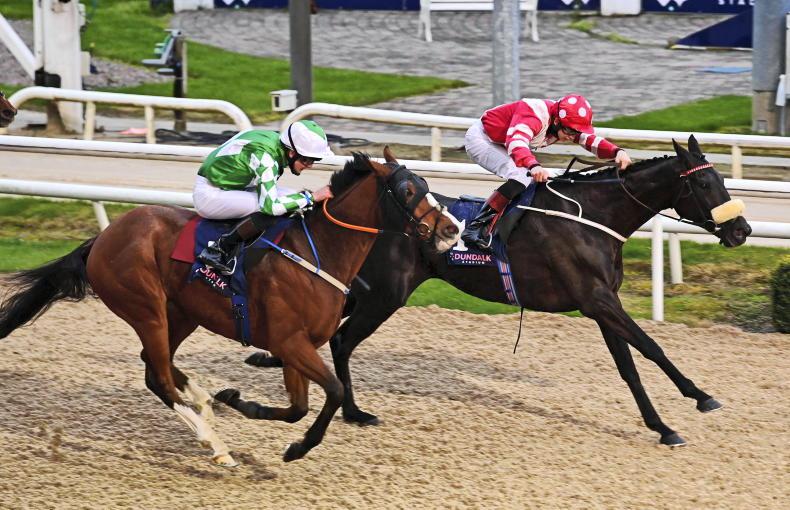 FRIENDLY recorded a 33/1 shock when scoring with some style in the Irish Stallion Farms EBF Cooley Fillies Stakes, a Fast-Track Qualifier for the All-Weather Finals Day at Newcastle on Good Friday next year.

The superbly bred Galileo filly has been kept busy this year with a Bellewstown maiden her only success in 12 outings for the Coolmore partners, although she’s been highly tried in stakes company on many occasions.

The Aidan O’Brien-trained sister to Mars and Gustav Klimt made good headway in the straight to lead inside the final furlong and soon asserted to score by two and a half lengths. Surrounding, winner of this race in 2018 and 2019, continued her amazing run of consistency in the mile listed event by filling the runner-up spot for the second successive year with So I Told You just a nose back in third.

Winning rider Wayne Lordan said: “She’s a very well-bred filly and that was great to get a listed win into her. I can promise you if you could see the way she works you’d be surprised it took her as long as it did.

“She travelled very well and I was cautious about getting to the front too soon because she can be a bit lairy when she gets there. She’s run some nice races all year and was sixth in the Guineas not beaten that far. That would entitle her to do that today.”

Collective Power (2/1) got off the mark at the 12th attempt in the five-furlong BetVictor Proud To Support Irish Racing Maiden. The Sabina Power-owned son of Slade Power was patiently-ridden by Ben Coen and got a nice split between horses a furlong out before going on to beat Cheval Blanc by three-quarters of a length.

Winning trainer Eddie Lynam said: “He’s a homebred but is nothing like his mother or father, who I both trained. It’s very unusual to win a maiden off a handicap rating of 62 and he’ll probably come back here in a few weeks.”

Donnacha and Ryan double up

DONNACHA O’Brien was on hand to saddle a double teaming up with Gavin Ryan to land the two juvenile maidens on the card with Lesson Learned and Simply Glorious.

The Leonard Green-owned Lesson Learned stepped up considerably on his Cork debut to take the Irish Stallion Farms EBF (C&G) Maiden. The 17/2 chance was never far from the pace and responded gamely inside the final furlong to beat Together Aclaim by half a length.

“We thought he was a decent horse and the ground was too soft for him the first day in Cork so we left him off and said we’d bring him back here and it worked,” said O’Brien. “He’s very tough and tries very hard. What his level is I’m not sure but we’d hope he could be a stakes horse. He handles this surface and we might run him again.”

Simply Glorious also showed a good attitude justifying 13/8 favouritism with a half-length defeat of Knocklane Lass in the Irish Stallion Farms EBF Fillies Maiden, although third-placed Osraige probably threw away a winning chance by veering badly left under pressure inside the final furlong.

“We liked her early on in the year and she had a few good runs in maidens. She got a bit weak and we gave her a break. She was working well and we brought her back here,” said O’Brien, who trains the winner for Westerberg and the Coolmore partners.

MIKEY Sheehy has enjoyed a great year finishing a clear second to Dylan Browne McMonagle in the apprentice championship and he was again seen to good effect when partnering a 32/1 double aboard Golden Twilight and Designer Cailin.

After the 5/1 chance got the better of a final furlong battle with Hurricane Alex by a neck, trainer Michael Halford said, “Mikey is a huge advantage in those apprentice races.

“Niall (McCullagh) thought he made a bit of a noise after disappointing here so we put a tongue tie on him and he’s been training well at home. I’d say he’ll tip away here. He has very little mileage on the clock and I’m delighted for Frank (Lynch, owner) who is a local man.”

It was even closer in the Extra Places Everyday At BetVictor Handicap where Designer Cailin made most of the running and just held on by a nose from the fast-finishing Sense Of Romance. “She’s lucky as she won by a short head the last day and a nose tonight,” said Pat Martin, who trains the 9/2 shot for his wife Joan.

“He got a soft lead tonight which was a help and she’s really game and tough. She’ll probably keep going.”

Favourite backers collected in the other race on the card, with Ozymandis leading early in the straight and keeping on well under pressure inside the final furlong for Gary Carroll to take the BetVictor Casino Handicap.

The 5/4 market-leader is trained by Ger Lyons for a group comprising his wife Lynne, David Spratt, Sean Jones and Noel Greenhalgh.

Lyons’ brother Shane said: “He’s a very genuine horse and will probably have a break now as there is not a lot for him. He’s very lightly raced but with an engine. He got struck into when he won here back in April and that held him up a bit. He’s a horse we like for next year.”