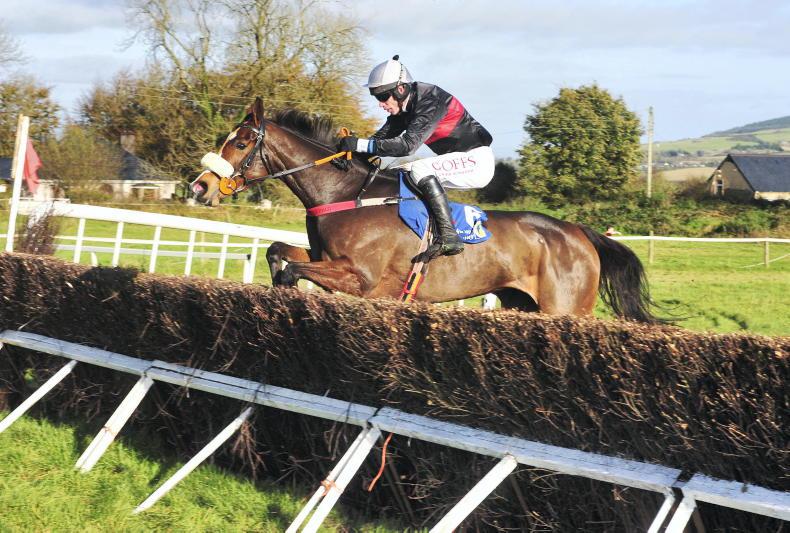 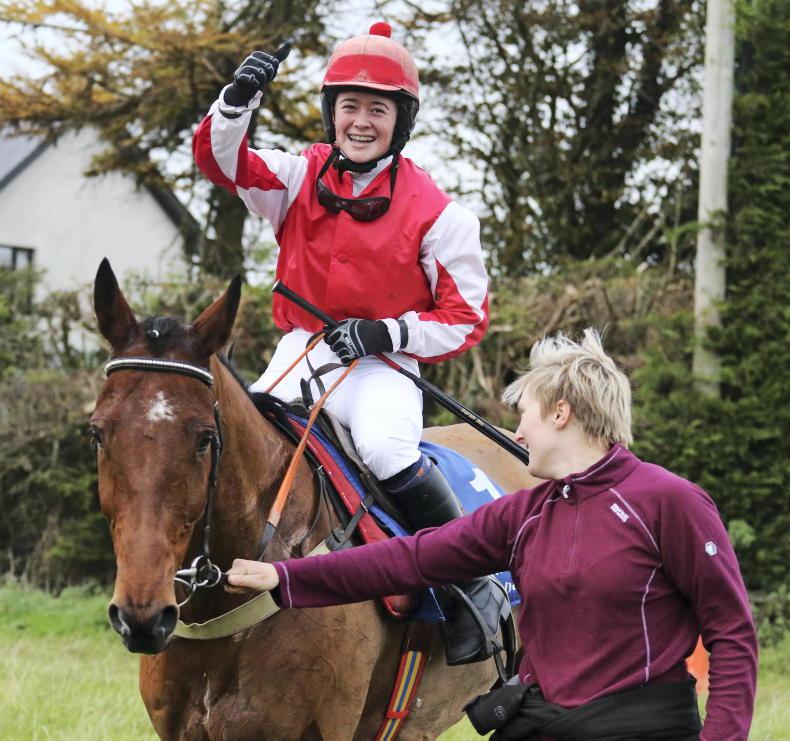 THERE was a vibrant atmosphere at Sunday’s Duhallow Kanturk meeting at Dromahane as the Aidan Fitzgerald-trained Queens Vic hinted that a bright track career lies in wait by destroying the opposition on her career debut in the four-year-old mares’ maiden.

Queens Vic (5/2) tracked Peggy’s Cross in second spot until receiving the office from Derek O’Connor approaching the penultimate of the 13 obstacles.

The response was immediate with the winning daughter of Shirocco, a €29,000 acquisition at the 2020 Goffs Land Rover Sale, a three-parts sister to Cheltenham Gold Cup runner-up Minella Rocco, bounding clear to beat Peggy’s Cross by 10 lengths.

The favourite, Dreaming Diamond, returned a distance adrift in third spot with the trio, all daughters of Shirocco, being the only finishers from the six runners that set out.

“She’s a lovely filly, as good as I’ve had and we bought her from Gary Hadden at the Land Rover Sale,” said Fitzgerald of the Cobajay Syndicate-owned Queens Vic, who was due to be offered at last night’s Tattersalls sale after racing at Cheltenham.

Ellen Doyle’s newcomer The Gunner Yeats (4/1 - 3/1) similarly booked his passage for the boutique sale at the Prestbury Park venue by making all the running in the four-year-old geldings’ maiden, much to the dismay of the 13 bookmakers present.

The Gunner Yeats had fellow Co Wexford first-timer Not Long Left as his closest pursuer from four out. Runner-up Not Long Left forfeited any winning chance that he may have had by blundering two out and the winning son of Yeats, representing Baltimore Stables Syndicate, was always in command as he returned with three lengths to spare over Donnchadh Doyle’s charge to provide rider Johnny Barry with a very first winner for Ellen Doyle.

The Gunner Yeats was purchased by Tom Keating for €29,000 at last year’s Tattersalls Ireland May Sale and it was fitting that the Nicholastown Castle Stables proprietor was on hand to join in the post-race celebrations.

The Gunner Yeats was due to be offered at Cheltenham on Friday evening.

Ellen Doyle’s brother James reported of The Gunner Yeats: “He’s a galloping type of horse and we knew that he was smart coming here. John O’Neill had a lot of work done with him at home and it’s cruel on John that he broke his collar-bone a couple of weeks ago.”

In O’Neill’s absence, both Brian Dunleavy and Mikey Sweeney have been riding out at the Doyle siblings’ Monageer base.

Cheers all round for McNamara

THE biggest cheer of the afternoon was reserved for 17-year-old Sarah McNamara from Asdee who experienced the best possible start to race-riding by partnering a winner on her first mount aboard Turlough O’Connor’s former hurdler Cloudy Wednesday in the adjacent hunts maiden.

Clonmoyle took the six runners along until overtaken by Blackprint after the fourth last.

Cloudy Wednesday (10/1) was making progress the whole time and he hit the front on the outer before three out. The eventual winner was well in control when not overly fluent at the last and he maintained the tempo to contain Trojan Five by a length.

McNamara works for winning handler O’Connor who was full of praise for the ride that the teenager gave Cloudy Wednesday. Owned and bred by his handler’s aunt Irene Walsh, Cloudy Wednesday is now likely to revert to hurdling duty.

The Richie Harding-trained Captain Broomfield (7/2), an own-brother to the previous afternoon’s Grade 3 Poplar Square Chase winner Captain Guinness, vindicated the promise of his third-placed debut effort at Castletown-Geoghegan last month by landing the five-year-old geldings’ maiden in the hands of Michael O’Sullivan.

Captain Broomfield was restrained towards the rear until creeping closer setting out on the final circuit. He effortlessly moved through to challenge three out and was travelling best from the second last.

Although Forpaddytheplumber closed on the flat, the winning son of Arakan was always doing enough in front to prevail by a length from the market leader.

The physically imposing Captain Broomfield, acquired for a mere €5,000 at the 2019 Tattersalls Ireland August Sale before his illustrious sibling hit the racetrack, is owned by Ray Fitzgerald from Midleton who was planning to send the gelding to last night’s Cheltenham sale.

BEN Crawford partnered an initial Dromahane winner by combining forces with his handler brother Stuart to capture the four-runner open aboard Poli Roi.

A three-time track winner when under the care of Gordon Elliot, Poli Roi (11/10) won two late-season opens for the Larne-based operator this past May and he never really gave his supporters any undue cause for concern here.

He readily took up the running three out and was well in command approaching the last, with two lengths separating him from runner-up La Feline who finished mid-division in the 2020 renewal of the Grade 2 Mares’ Novice Hurdle at the Cheltenham Festival.

The nine-year-old Poli Roi, shared by Raymond Scullion and Martin McGrogan, was declared to run in this past Tuesday’s Fairyhouse hunters chase and he has the Cheltenham Foxhunter next March as his ultimate long-term objective.

Ciaran Fennessy, on the mark with Fiery Brown at Loughrea last month, saddled his second winner of the season from as many runners courtesy of newcomer Rockanrye in the five-year-old mares’ maiden.

Shane Baragry sent Rockanrye (5/2 - 9/4), representing Mayobridge-based breeder Patsy Murphy, to the front from flagfall and she powered clear from the last to dismiss recent Tattersalls runner-up From This Moment by 10 lengths.

Battle Of Mirbat (K. Purcell): This son of Ocovango made a particularly pleasing debut in the four-year-old geldings’ maiden by going third from the final fence to be beaten seven lengths into third spot by The Gunner Yeats.