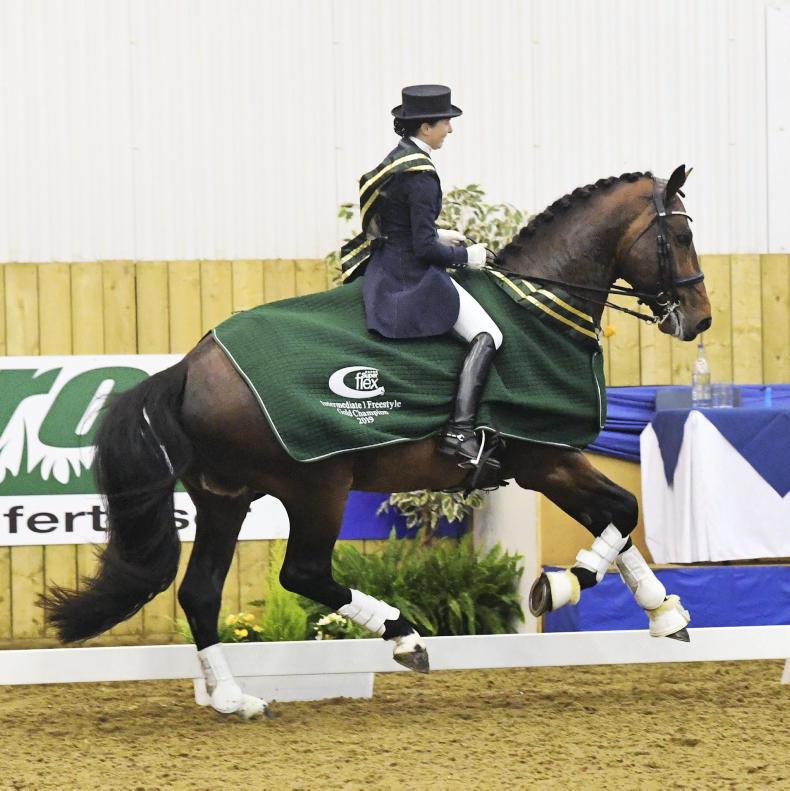 THIS year’s NAF five-star Winter Dressage Championships was a huge success with a host of stunning performances from leading names in the sport.

Horse & Country TV will showcase the two gala evenings, which premier on demand this weekend, Saturday and Sunday, April 13th and 14th to subscribers of H&C web and mobile apps.

Without doubt this year’s championships was one of the best ever with world class riders travelling to Hartpury Arena in Gloucestershire to compete.

The Magic Prix St Georges Freestyle Gold Championship proved a huge success for relative outsiders Katie Bailey and Eagle Nouvelle who swept to a narrow victory much to the crowd’s delight.

Popular guest commentator Isobel Wessells was thrilled to open the night with a super test.

A huge extended walk shows outstanding suppleness over the back, the flying changes are straight, active and expressive and in trot the horse shows much ability for the future.

Isobel was as impressed as the judges’ panel: “I thought that was really super – wonderful fluent test, much harmony and ease. The horse made no mistakes and I really loved this music – it’s been my favourite so far!”

Katie enjoys a deserved moment in the spotlight in front of a supportive home crowd and it wasn’t a victory Katie was expecting; “I was hoping for a top three but never expected this. I’m a bit speechless but thrilled to pip the others!” she says.

In an action-packed night at the final Gala Performance of this year’s NAF Five Star Winter Championship, viewers will witness plenty of drama, inspiring performances and a touch of artistry.

Newmarket rider Nikki Barker took the Superflex Inter I Freestyle Gold title. Riding her own and Viv Gleave’s stunning Spielberg sired stallion Durable, Nikki had a mishap with her music when first entering the arena but head judge at C, Claudia Thaller, gave her permission to come back at the end of the class, in the best interests of the sport.

In her first effort, as Nikki raised her hand to signal the start of the music, it was evident that something was amiss as it was an old freestyle of hers.

In a remarkable feat of horsemanship, Nikki returned to the arena after a one-hour hiatus following the earlier music issue. All eyes were on Durable, an imposing bay stallion who is simply too handsome for words. Riding to their fascinating Kill Bill soundtrack, a compilation by Ros Emery-Kay, the trot work is oh-so elastic and powerful. The half passes devoured the ground. The canter is powerful and expressive through all movements, yet with control and excellent placement of the pirouettes. Extended trot on the diagonal to the centre line concludes their performance to rapturous applause from the knowledgeable crowd.

“I’m absolutely thrilled to win this class, especially considering what happened with the music,” says Nikki after the prize-giving ceremony. “The music started and I didn’t even recognise it! I now know it was a very old Advanced Medium. He felt fab and ready to go but then that. I spoke to judge Sandy Phillips at E and asked what would happen and she said that either the head judge would make me go or I could go later. I thought, well, if I have to go, I’ll just well and truly freestyle it!”