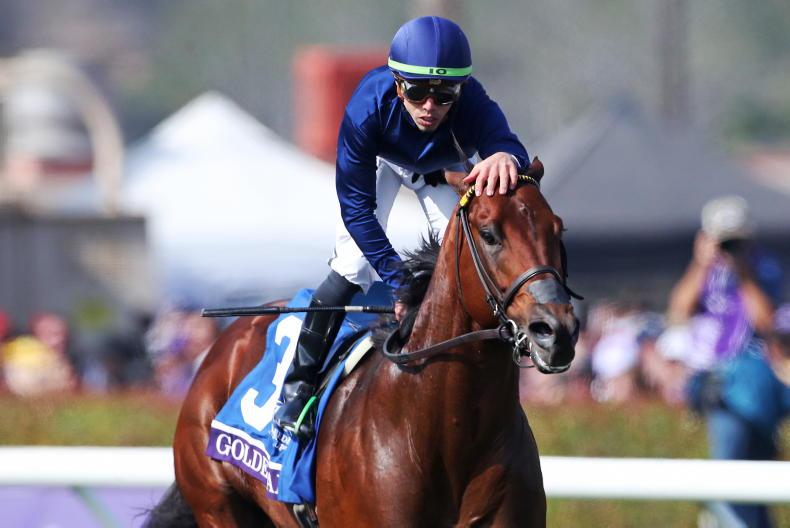 Ce Ce, a Grade 1 winner around two turns and a multiple graded stakes winner sprinting, showed her affinity again for the latter with a two-and-a half-length rumble under Victor Espinoza for trainer Michael McCarthy.

The Elusive Quality mare came from two lengths back after the opening half-mile to win for the fourth time in six starts this year.

“It was almost too good to be true on paper,” McCarthy, who won this year’s Preakness Stakes with Rombauer, said of the early pace duel between Gamine and Bella Sofia that set up Ce Ce’s victory.

Aloha West delivered an even bigger surprise winning the Sprint on dirt at 11/1 and at the expense of likely champion male sprinter Jackie’s Warrior, who finished sixth at 1/2. Aloha West won a head bob to nose out Dr. Schivel.

“It’s surreal to be here. This is my home track. I live five minutes down the road from Del Mar, so to do it here with my family, this guy right here (winning trainer Wayne Catalano), he’s a treasure to the racing industry and a Hall of Famer in my book,” said Eclipse Thoroughbred’s Aron Wellman.

“And Jose (Ortiz) and I have had some incredible moments together. We won a classic four years ago and now to win a Breeders’ Cup with him, it’s just, I’m surrounded by class.”

Coolmore’s Golden Pal showed his speed in the preceding Turf Sprint, leading from the break on the way to a length-and-a-quarter victory over Lieutenant Dan in near-course-record time of 55.22secs for the five furlongs.

The three-year-old son of Uncle Mo improved to five-for-eight and unbeaten in his five starts in the US for trainer Wesley Ward.

“I was actually watching the race with a good friend of mine, Henry, and I said, ‘Henry, watch this fellow go out of the gate, and he says, ‘What you mean?’” said M.V. Magnier, representing his mother Sue Magnier, Michael Tabor, Derrick Smith and Westerberg.

“The language that came out of him after the horse went a couple of strides I won’t be repeating in here. It was incredible.” A Case Of You, winner of the Group 1 Prix de l’Abbaye de Longchamp last time out for Adrian McGuiness, finished fifth in the Turf Sprint.

Life Is Good sizzles all the way in Mile

LIFE Is Good defeated Medina Spirit in back-to-back starts this winter at Santa Anita and looked to be Bob Baffert’s latest Kentucky Derby winner. Until he wasn’t.

An injury knocked him off the Triple Crown trail and Baffert’s subsequent medication issues with Medina Sprit in the Derby led owners WinStar Farm and the China Horse Club to move him to Todd Pletcher in New York.

The Into Mischief colt didn’t miss a beat back on the East Coast, finishing second to Jackie’s Warrior in a Grade 1 at Saratoga before a score in the Grade 2 Kelso set up his electric victory in the Grade 1 Big Ass Fans Dirt Mile.

He blitzed the Dirt Mile field from the start, passed six furlongs in 1m 8.76secs (only 0.27 slower than the Sprint’s winning time) and won by five and three-quarter lengths.

“He’s one of classic rare horses that you could consider three different races on the card,” Pletcher said. “Who knows, he might even grass on top of that. But he’s just, super-fast.

“What we have seen from him in his training is he has the ability to go fast and keep going and I think that’s what everyone was able to see today.”

Going Global gets the jump start

GOING Global, a three-year-old daughter of Mehmas who started her career in her native Ireland for Mick Halford, won her sixth stakes from seven starts in the US for trainer Phil D’Amato in the Grade 2 Goldikova Stakes, the race prior to the Filly and Mare Sprint.

Coming off a win in the Grade 1 Del Mar Oaks in August, Going Global improved to seven-for-11 with her length-and-a-half win over fellow Irish-bred Zofelle.