Zero Ten won an eventful edition of the Grade 3 Pierce Molony Memorial Novice Chase, Jetz got his first win of the season and Politesse showed promise in the maiden hurdle 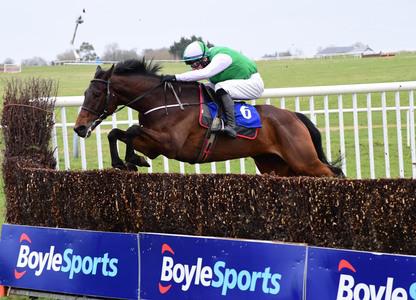 Trained by Emmet Mullins and ridden by his cousin David, Zero Ten had travelled supremely well throughout in the two-and-a-quarter-mile contest.

Sizing Pottsie, who was bidding for the hat-trick, had taken the field along at a decent gallop and was still in front turning into the straight, but Zero Ten appeared to be going better.

Running to the second last, it looked a matter of when Zero Ten would take up the running, but Sizing Pottsie got in too close in any case and came down, bringing down Dallas Des Pictons.

Paul Townend had been biding his time on Cut The Mustard, though, and was the last to challenge, but then she came down at the last when two lengths in arrears.

???? An incident-packed feature at @thurlesraces as the €55,000 Grade Three Pierce Molony Memorial Novice Chase goes the way of Zero Ten for Emmet Mullins under @davym15

???? Pleased to report that all jockeys are up OK

“It was brilliant. We were a bit unlucky the last day when he tipped up with a novicey fall and the tables have turned today as we had a bit of luck,” said Emmet Mullins.

“It’s great, he jumped around and put it back together again. Fingers crossed, now we can keep it going and he could have a nice finish off to the back of the season as a novice.

“He jumped straight and, to be fair, the last day it was probably his best round of jumping up to the fall.

“He learned from the fall and especially today when he went to the last, he had a good head of steam down to it and he was able to sit up and pop. He’s learning and so are we.

“It’s a big monkey off David’s back to come back here and do that in a big race today, a Grade 3 race especially at Thurles with the Molonys.

“It’s a great race to win with the Mullins’ being so close to the Moloneys over the years. It’s a proud moment to win that race.”

???? Jetz has plenty of good form in Graded events over fences & records a smooth success back over timber for @Robbie_Power_ & @Jessica_Racing at @thurlesraces

Class came to the fore in the BetVictor Hurdle as Jetz registered his first win of the season.

Jessica Harrington’s eight-year-old has mixed it with some of the best hurdlers and chasers in Ireland in recent seasons.

Not beaten far behind La Bague Au Roi in Grade 1 company over fences last season, he returned to hurdles last time out and was a fair second to Charli Parcs.

Harrington kept Jetz over the smaller obstacles and he always looked to be travelling better than market leader Mary Frances, and when Robbie Power asked him to go about his business, he pulled six lengths clear to reward punters at 3/1.

Power said: “He did that well. He was entitled to do that on his hurdles form and on some of his chase form as well.

“He seems to be getting his confidence back after a couple of runs over hurdles. He was quite keen today for the first mile or so, but he saw out the trip really well.

“His jumping improved as the race went on, but he’s always that way, even over fences he’s the same and the further the race goes, the better he jumps.

“Those couple of runs over hurdles will have done his confidence good and hopefully we can get a chance to go back over fences.

“The good gallop suited me as I was keen enough. He’s a horse with a very high cruising speed but he also stays well.”

Politesse makes a winning hurdling debut to make it two wins from four starts under Rules for Lorna Fowler & Conor Orr in the opener at @thurlesraces pic.twitter.com/PEu5acUJr5

Lorna Fowler appears to have a smart mare on her hands in the shape of Politesse, who ran out a ready winner of the Adare Manor Opportunity Maiden Hurdle.

Following a small delay to racing due to an administrative error regarding the published weights, the contest finally got underway and Politesse, who was a bumper winner last time out, was always in the right position under Conor Orr.

She pulled away to beat odds-on favourite Fakiera by two and three-quarter lengths at 9/4.

Fowler, a former racing television presenter, only trains a small string at her Co Meath base and was thrilled to get another winner on the board.

“I’m absolutely delighted. She came out of her bumper no problem and, to be honest, it didn’t take very much out of her,” said Fowler.

“She’s done a lot of schooling, I didn’t know if inexperience would tell today, but I think what she’s shown today is that she is very talented.

“I’m delighted to have gotten her out today. We could have kept her for bumpers but, especially when you see what is going on in the world, sometimes it is better just to get on with it.

“She’s over hurdles now, she’s won, and she has her novice status until the Hatton’s Grace meeting. I always take stock about what our next plan is, but that will have brought her on a ton anyway and it’s what she needed.

“Conor has ridden her a lot at home, knows her well, and I think it has to help when they know a horse and know the stride on them. You have to use that stride with her.

“She’s clever and at home she always looks at what’s she’s doing. It was her first time jumping hurdles in a crowd, in a race, and she is smart enough that she would have got it as she went along. That will bring her on so much.

“She’s that kind of filly and everything she’s done, she’s come on and on. She’s bright, takes it in and moves to the next step. I’m very, very lucky to have her and I know that.

“On everything she’s shown us so far, I think we can be a little bit ambitious with her. Ground-wise that was lovely for her, on the easier side of soft.

“If, God willing, racing continues we’d definitely give her something else this year. If it doesn’t, aren’t we lucky we know we have a proper filly on our hands.” 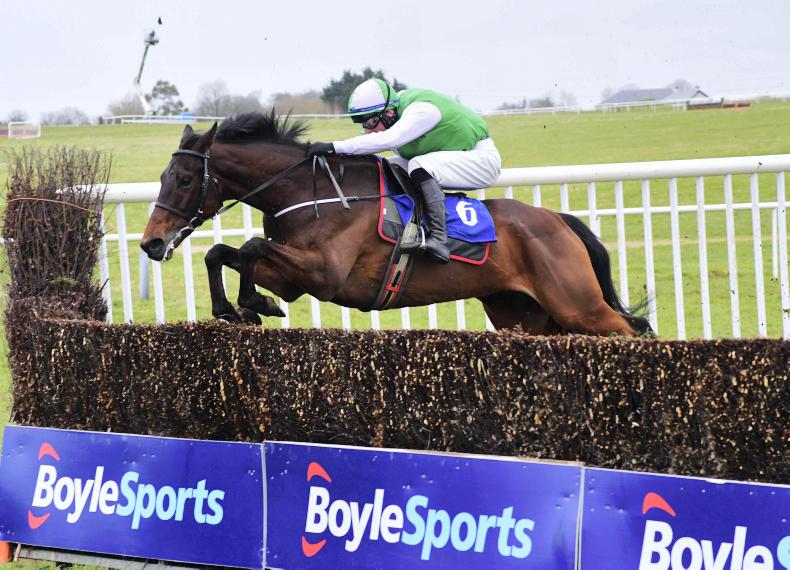 THURLES SATURDAY: Another bullseye for Zero Ten
Zero Ten's jumping held up as he ran out the winner of the Grade 3 Pierce Molony Memorial Novice Chase 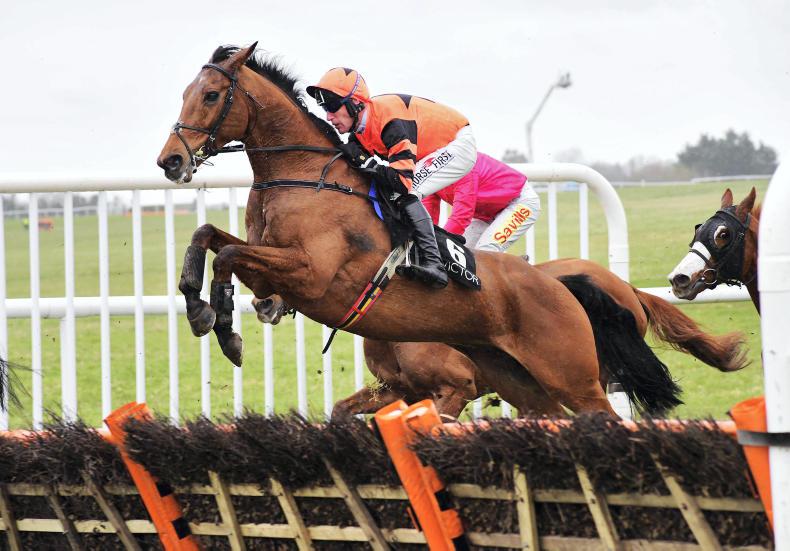 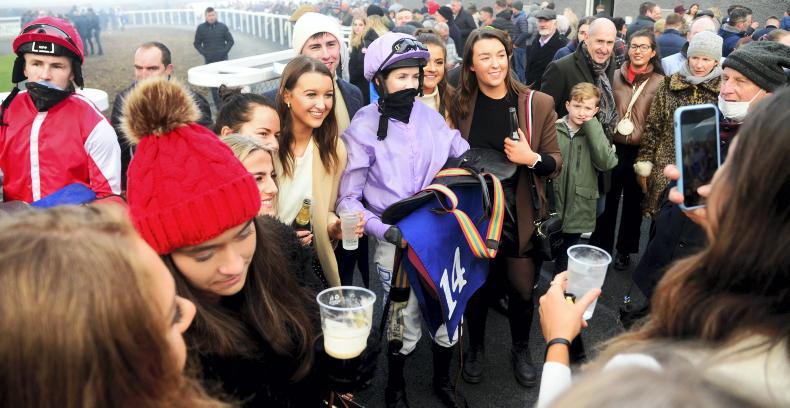 Anne Marie Duff
PHOTOS OF THE WEEK: Around the tracks last week
A selection of photos from the last week's racing from Thurles, Navan and Dundalk 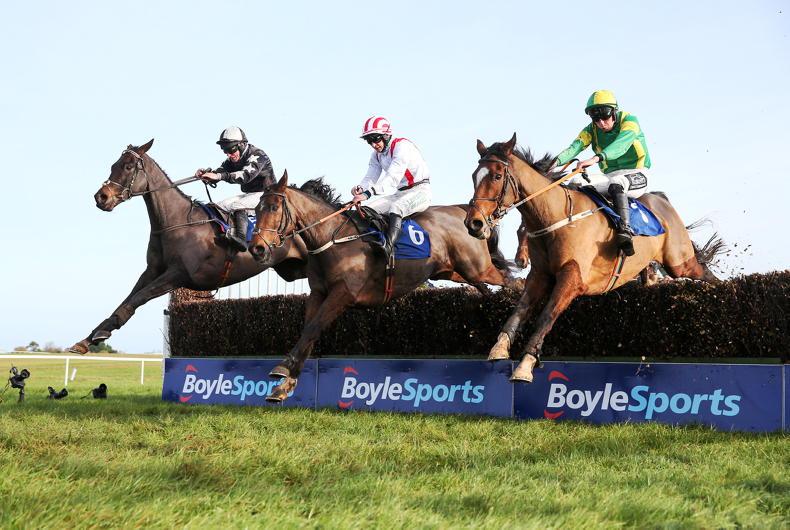