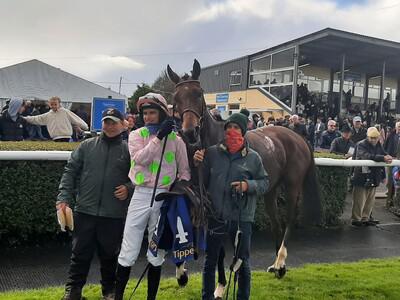 Danny Mullins always had the 4/7 favourite and dual Grade 1-winning hurdler to the fore – and although their clear lead was eroded approaching the straight, Saldier had plenty in reserve to stretch his superiority back to three lengths at the line.

Darasso got closest to him, with Jason The Militant keeping on with promise too on his first start of the new campaign to take a four-length third.

The winning jockey said: “It was a good performance, and I suppose he was entitled to do that

“It was always going to be a competitive race, but the fitness edge was a help to him.

“He was a bit fiddly at the second-last – but three strides later he picked up again.”

Saldier was following up his Galway Hurdle victory back in July, when Patrick Mullins was on board.

Having replaced his namesake here, Mullins added: “He’s shown a good spark, and hopefully he can go on.

“He once promised to be a really good horse, and hopefully he can make steps back towards that.”

Purple Mountain was the first Grade 3 winner on the card for the Closutton yard in the opening Joe Mac Novice Hurdle, coasting home six lengths clear in the end – but only after the last-flight departure of San Salvador.

The outcome was far from certain, with the latter still in a near two-length lead but being strongly challenged when taking a heavy fall.

Purple Mountain was Mullins’ apparent second-string behind favourite Arctic Warrior, who was midfield until losing his position quickly to be eventually pulled up.

Sean O’Keeffe held up the 17/2 winner, off the pace set by Annie G and San Salvador, before closing at the end of the back straight.

After the dramatic departure of the six-year-old mare’s chief rival, it was left to 100/1 shot Bonarc to stay on from the rear into second at the line.

O’Keeffe said: “I felt I was coming with a good run and, with a good jump at the last, that I’d beat JJ (Slevin, on San Salvador).

“She was good and brave over the last two. She travelled well, and when I got stuck into her she found plenty.

“She’ll have no trouble staying two and a half miles.”