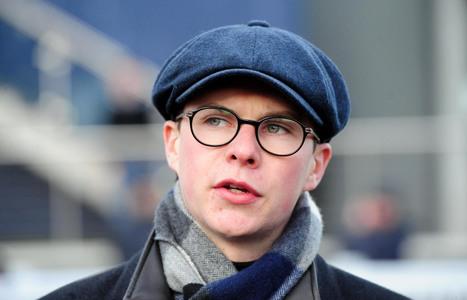 MASTER Of Reality produced a fine front-running display to cause a major upset in the Group 3 Sequence Events Vintage Crop Stakes at Navan.

A field of nine runners went to post for the 14-furlong contest which is this year the sole Irish qualifier for the Weatherbys Hamilton Stayers’ Million – with a £1 million bonus up for grabs for any horse who can win the Gold Cup at Royal Ascot, the Goodwood Cup and the Lonsdale Cup at York – as Stradivarius did in 2018.

The 5/4 favourite was Aidan O’Brien’s Irish Derby and St Leger hero of two years ago in Capri, but he was under pressure a long way from home and was ultimately disappointing.

The Joseph O’Brien-trained Master Of Reality was a 33/1 shot in the hands of Wayne Lordan and led for much of the journey. He looked booked for minor honours when tackled and briefly passed by Mustajeer, but roared back gamely to prevail by a neck. Capri’s stablemate, Southern France, was third.

“He had good form in France and I thought he would need the run. Wayne (Lordan) kept it nice and simple on him because he is an uncomplicated horse,” said the winning trainer.

“He stays and goes well and is a well-bred horse. He had two ordinary runs for me last year, but it is hard swapping mid-season from France to here.

“We gave him time and I’m delighted for Lloyd and Nick (Williams, owner). They sent him to me with a big reputation and it didn’t work out last year and they gave us another chance with him.”

Considering future targets, the trainer added: “We’ll have to train him for a Gold Cup now. He stays and he is going to come on a bit for the run, I’d say. We’ll see what happens.

“He had been working well, but to be honest, I didn’t think he was fit enough for his first run – I thought he would come on a bit from it. It is probably testament to his attitude to tough it out.”

Leading Oaks fancy Pink Dogwood wins well on her seasonal bow and it will be interesting to see how much she tightens up in the market for the Epsom Classic now pic.twitter.com/VVFESXiTqM

Trainer Aidan O’Brien fired a three-pronged assault on the 10-furlong contest, with Pink Dogwood very much the first string under Ryan Moore.

After successive runner-up finishes at the Curragh last summer, the daughter of Camelot made it third time lucky at Gowran Park before being stepped up to Group 1 level in the Prix Marcel Boussac at ParisLongchamp.

She was far from disgraced in finishing fifth in France – beaten just a length and a half – and was the 4/5 favourite for her seasonal bow.

Odds-on backers were made to sweat, with Noel Meade’s recent Clonmel scorer Encapsulation refusing to go down without a fight, but Pink Dogwood eventually got the better of the argument by half a length.

The Ballydoyle inmate is a best priced 5/1 market leader for the Oaks at Epsom on May 31st.

O’Brien said: “She was just ready to start off and you couldn’t be happier with her. The plan was always that we would go to the Oaks and whether she will have a run or not before then, I’m not sure. It’s possible, but not definite, that she will go straight there.”

“She’s a lovely mover and would prefer better (ground), I would imagine.”

The Ger Lyons-trained Inverleigh was a decisive winner of the Listed Committed Stakes.

Successful on his racecourse debut at Leopardstown last August, the Excelebration colt went on to be placed at listed level in the Blenheim Stakes at Fairyhouse and Star Appeal Stakes at Dundalk.

Making his first appearance since October, Inverleigh was a 6/1 shot in the hands of Donagh O’Connor and was good value for the winning margin of a length and three-quarters over 5/2 favourite The Irish Rover.

Lyons said: “He shows nothing at home and neither does the filly (Chicago May, finished sixth), but the filly is very difficult.

“They were literally going through the motions at home and today was about blowing the cobwebs away and seeing where it lands, no expectations. Thankfully he has done it well and it’s a nice surprise.

“We might have a little go at seven (furlongs) somewhere along the line.

“The filly has run well and will improve for it and go for a fillies’ race next week.

“It’s nice for Donagh (O’Connor). He rides out for us once a week and has plenty of ability and that’s his first stakes win in his second ride in a stakes race.”

Back To Brussels made a winning debut in the BetVictor Bet 5 Euros Get 30 Euros Offer Irish EBF Fillies Maiden.

With Aidan O’Brien’s Tango a significant non-runner, a wide-open field of 12 runners went to post and it was Fozzy Stack’s 6/1 shot Back To Brussels who came out on top under Chris Hayes – seeing off Feminista by three-quarters of a length.

Stack said: “She has been going nicely at home. She hasn’t been away anywhere, but she quickened up well and she did it well.

“I suppose Naas or the Marble Hill would be the logical place to go with her. She could take in either of those races and then go to Royal Ascot or, alternatively, go straight to Ascot.”

Kinsella said: “Ruaidhri Tierney (agent) said that this lad (Shinnick) is very good and that Ger Lyons considers him to be decent. I said ‘on your word and on Ger Lyons’ word I will try him’. It was well worthwhile.

“Please God, you’ll see this week tomorrow week in the Curragh – I think they have a 45-70 over six (furlongs), which will suit him again.” 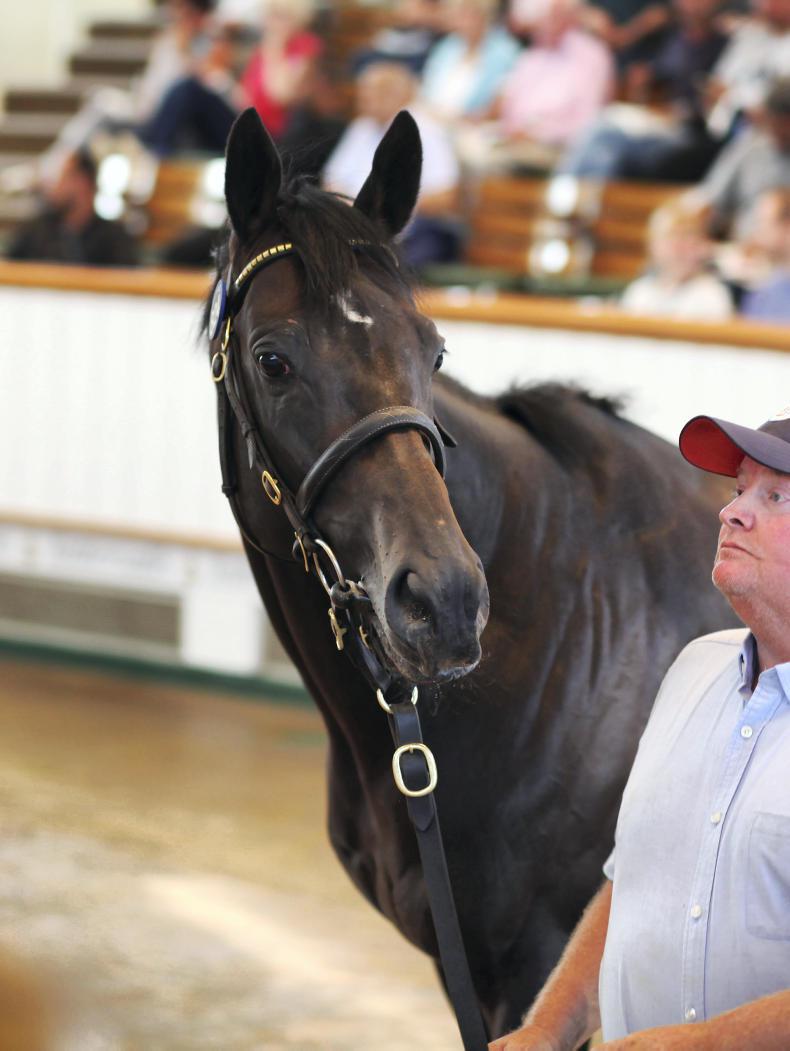 SALES: Inverleigh stars as July Sale concludes
The Ger Lyons-trained Inverleigh was the standout at the final session of the 2019 Tattersalls July Sale, writes Leo Powell 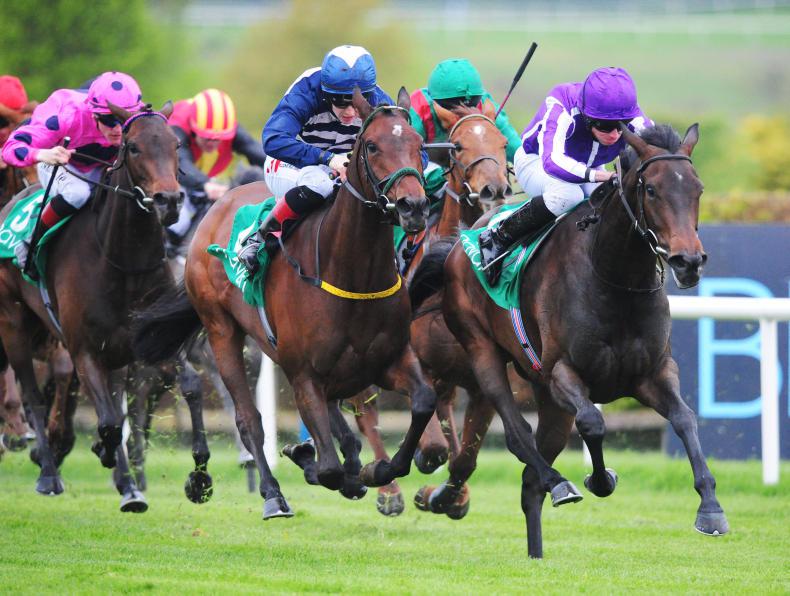 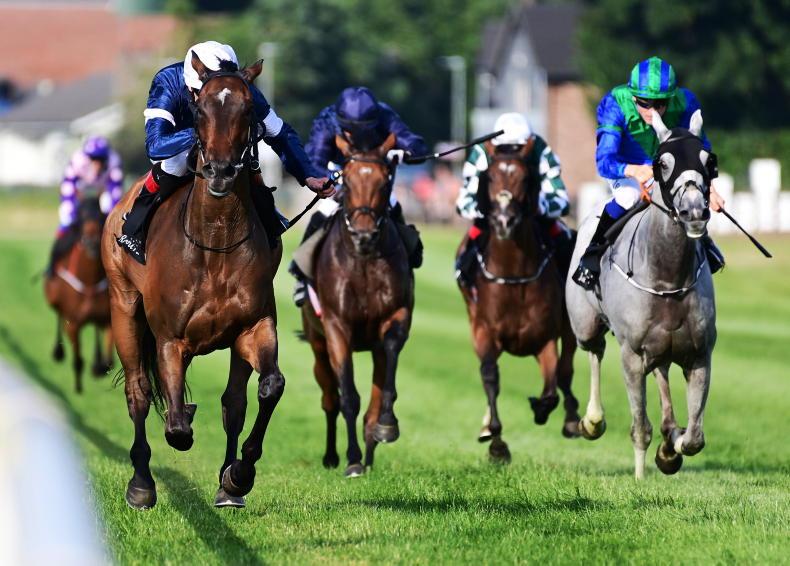 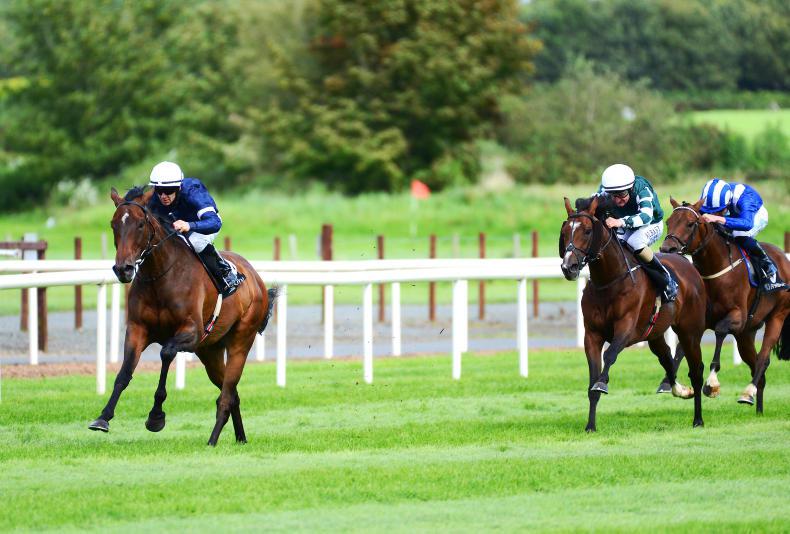