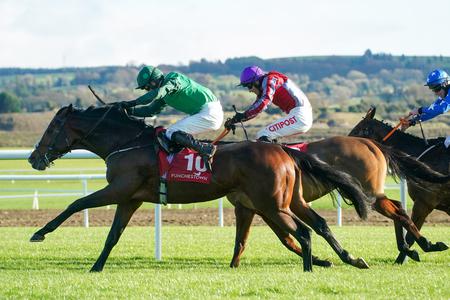 Daryl Jacob’s visit to Punchestown on Sunday was rewarded with a taking victory aboard Nusret in the John Lynch Carpets 3-Y-O Hurdle.

Nusret bolts up under @Dazjacob10 on his Hurdling debut and looks an exciting prospect for @JosephOBrien2 ?? #Winner #Nusret #DoubleGreen pic.twitter.com/aJzSvbRqkt

A Curragh maiden winner who was sixth in the Melrose at York in the summer, the Joseph O’Brien-trained three-year-old is now a good looking jumps prospect for owners Simon Munir and Isaac Souede.

He quickened up nicely in the closing stages to readily account for Morning Soldier by six lengths, and his rider feels the 5/2 winner has a bright future.

“I sat on him in Joseph’s as a two-year-old and I said when I got to the top that he would make a fine jumper. Little did I know he was going to end up going jumping,” said Jacob.

??? "I was impressed with him."@Dazjacob10 thrilled with hurdling debut Nusret, who jumped nimbly for @JosephOBrien2 and @simon_munir en route to a six-length triumph @punchestownrace pic.twitter.com/G0SX22rtvU

“He’s always shown a nice attitude to schooling, I’ve schooled him a couple of times at Joseph’s.

“When he won at the Curragh I really liked him and thought it was a really good performance. I thought he could be quite nice over hurdles.

“I’m sure they’ll have a nice race in mind for him now, there are a couple of good races over here at Christmas time.

“It was a nice performance, there were some nice horses in that race today. He’s done it very nicely, travelled around great and jumped great.”

Noel Meade and Bryan Cooper teamed up to good effect with Farceur Du Large (11/1) in the Ryans Cleaning Handicap Chase.

“Bryan is riding well and he’s been very lucky for me over the years. He’s a very good rider and it’s great to have him on your side,” said Meade.

“We bought him as a two-year-old in France and he’s taken a while. He’s a bit lazy as you can see in his races.

“He was going well in Galway and he made a very bad mistake at the third-last on very heavy ground and it knocked the bottom out of him. He still ran a very good race that day and I quietly fancied him each-way today.

“I would think he’ll probably run in the Paddy Power at Christmas, I’d imagine that will be his next port of call.”