Just one final step...
You must confirm your email address by clicking on the link we’ve sent to your email address.
You are only one short step away from reading 5 free Field+ articles.
VIDEO: Notebook puts down Champion Chase marker at Naas

VIDEO: Notebook puts down Champion Chase marker at Naas
By Irish Field Contributor on 21 November 2020
Gigginstown chaser puts his Arkle disappointment behind him in Grade 2 event

Notebook bounced back to winning form in the Grade 2 Poplar Square Chase at Naas on Saturday.

Notebook bounces back to form on his season debut to win the Grade 2 Poplar Square Chase for @HenrydeBromhead and @rachaelblackmor ?? pic.twitter.com/WFPdk7C95H

Henry de Bromhead’s charge was a dual Grade 1 winner last term, but he had disappointed when sent off the 5/2 favourite for the Arkle on his final start of last term, finishing a well-beaten sixth.

He looked to face a stern test on his return with Fakir D’oudairies and Cash Back, who chased him home in his two top-level victories, once again in opposition.

However, 11/10 favourite Cash Back sprinted to the first fence and crashed out, leaving outsider Djingle to set a strong gallop as Rachael Blackmore allowed Notebook (7/2) to get into his own rhythm at the back of the field.

Notebook and Fakir D’oudairies asserted their authority with two to jump, but Blackmore’s mount shaded the lead with a fine leap at the penultimate obstacle and strode away after the last to record a 12-length victory.

De Bromhead said: “He was a little bit rusty over the first few, but then jumped really well and stayed at it really well. It’s good to see him back to form.

“I’d say he’ll go to Leopardstown at Christmas. He loves it around there and has won two Grade 1s there.

“Rachael said he took a blow at the fourth-last and hopefully he’ll come on for it. I’m delighted with him.”

Call Me Lyreen extended his winning run to three in the Old Persian At Glenview Stud Fishery Lane Hurdle – bringing up trainer Gordon Elliott’s 100th win of the season in the process.

Call Me Lyreen bags the €60,000 Old Persian At Glenview Stud Fishery Lane Hurdle on his third start for @jackkennedy15 and @gelliott_racing ??@RathbarryStud pic.twitter.com/a35cYKq1WP

Despite already registering victories at Tramore and Sligo, Call Me Lyreen was an 11/2 shot under Jack Kennedy with Gars En Noir the 11/10 market leader for Willie Mullins on his Irish debut.

The market leader was in the front rank throughout, but was beginning to toil at the top of the straight as Call My Lyreen moved through to challenge along with Wolf Prince.

That pair had it between them after jumping the penultimate flight, but Call Me Lyreen kept finding for pressure on the run to the line, eventually prevailing by a length and three-quarters.

Elliott, who was speaking away from the track, said: “He’s a lovely horse and is stepping forward all the time. We weren’t sure about the ground, but he coped with it well.

“He’ll have a little break and go for one of the novice hurdles at the Dublin Racing Festival.

“Keith (Donoghue) deserves a lot of credit as he’s done a lot of work with this horse at home.”

Kennedy added: “We went a good gallop the whole way. He was a bit behind the bridle, but turning into the straight he came alive and I probably got there a bit soon on him.

“He’s a nice horse and hopefully he can keep improving. The ground was a question mark, but he handled it well.” 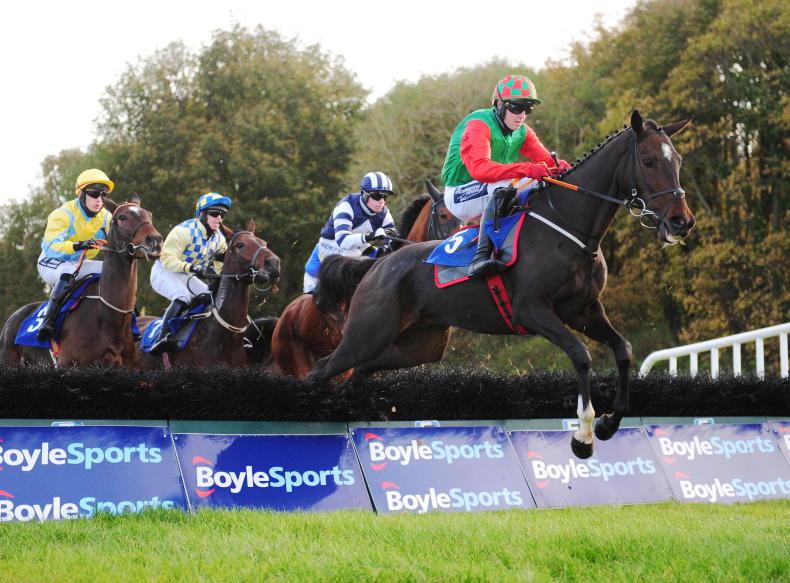