Just one final step...
You must confirm your email address by clicking on the link we’ve sent to your email address.
You are only one short step away from reading 5 free Field+ articles.
VIDEO: New Mandate rules in Royal Lodge

VIDEO: New Mandate rules in Royal Lodge
By Irish Field Contributor on 26 September 2020
Ralph Beckett and Frankie Dettori combined to win the Group 2 race at Newmarket on Saturday with a son of New Bay

New Mandate continued his rapid rise through the ranks with victory in the Juddmonte Royal Lodge Stakes at Newmarket on Saturday.

The Ralph Beckett-trained two-year-old made it a hat-trick of wins for the season as he successfully stepped up to a mile in the Group 2 prize.

Having demonstrated his battling abilities when squeezing through a tight gap to land a listed race at Doncaster last time out, the New Bay gelding was forced to dig deep again before emerging victorious.

Despite Ontario throwing down a late challenge, he could not find a way past New Mandate with three-quarters of a length separating the pair at the post.

Beckett said: “I was always surprised he could do it at seven really, given his pedigree and so on. It is extraordinary I managed to get him beaten twice in maidens. The first time out I hadn’t done enough with him really and I suddenly realised that afterwards.

“The second time, Jack Mitchell kind of got rolling a bit early on the July Course. He has shown up from the first piece of fast work he did. Everything he has done has been very professional.

“He was gelded in January as he was like Warren Beatty on steroids. We had to geld him, but he wouldn’t have been the horse he is if we hadn’t.”

A trip to America could be on the cards for New Mandate, with Beckett eyeing the Breeders’ Cup Juvenile Turf.

Beckett said: “We will see where we go from here. Obviously he can’t run in anything worthwhile in the spring, so we have to cut our cloth this autumn. We will have a discussion about the Bredeers’ Cup Juvenile Turf. It has been great.”

The winner is a son of first season stallion New Bay, who stands at Ballylinch Stud in Co Kilkenny.

New Bay had another Newmarket winner as Saffron Beach landed something of a gamble when making a winning debut in the Blandford Bloodstock Maiden Fillies’ Stakes.

Available at long odds on Friday, the Jane Chapple-Hyam-trained filly, who returned at 12/1, knew exactly what was required on her racecourse bow, running out a four-and-a-quarter-length winner of the seven-furlong prize.

Chapple-Hyam said: “It’s no surprise. We were very happy with her and she had been galloping with the colts Albadri and Prince Of Abington. She has shown a nice attitude. It’s always nice to see her go away from the field.

“It was impressive and it is nice to have a good class filly in the stable.

“I certainly did back her. Prince Of Abington won nicely at Ascot and Albadri ran a blinder the other day in the Tattersalls Stakes. When you’ve got horses working together, you get a guideline.”

A step up in class is now likely for Saffron Beach with the Racing TV Stakes, better known as the Radley, at Newbury identified as a possible target.

Chapple-Hyam added: “I think I’d like to keep her at that trip on her next start. The Sangster and Wigan families are local to Newbury, though I wouldn’t want soft ground for her. We will just have to watch this weird English weather.” 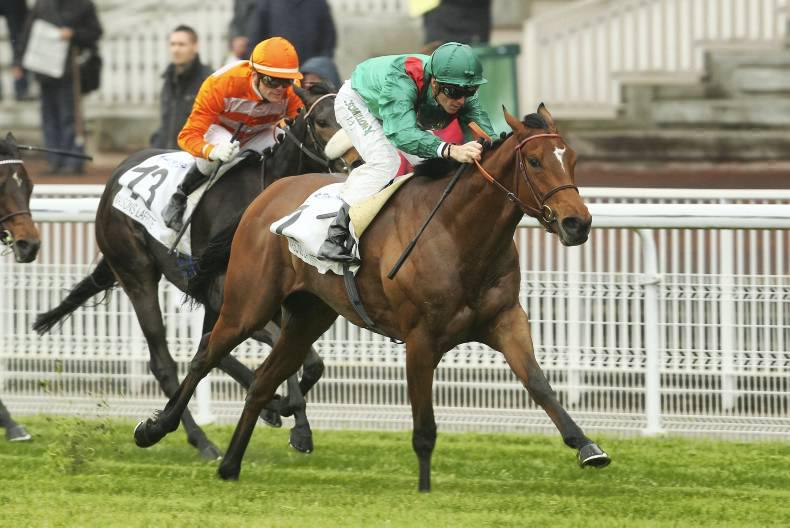 Racing News
SIMON ROWLANDS: Sectionals put Ervedya top of the class
By Irish Field Contributor on 13 May 2015
More in Latest News
News FREE
NEWS: Wembley could score for O'Brien among seven Futurity entries
News FREE
NEWS: Heffernan takes over on Princess Zoe in Royal-Oak
News FREE
CHELTENHAM: Search for sponsors for Grade 1 novice chases at Cheltenham
Classifieds
Place ad
Get full unlimited access to our content and archive.
Subscribe to The Irish Field
Unlimited access to The Irish Field via your computer, mobile device, tablet or newspaper delivered to your door.
Subscribe now +
Already a subscriber? Sign in