Just one final step...
You must confirm your email address by clicking on the link we’ve sent to your email address.
You are only one short step away from reading 5 free Field+ articles.
VIDEO: Listed win at Listowel for Fozzy Stack and Chris Hayes

VIDEO: Listed win at Listowel for Fozzy Stack and Chris Hayes
By Irish Field Contributor on 22 September 2020
A review of the highlights from Tuesday's all-flat card at the Co Kerry track

Lady Wannabe made the most of having her sights lowered with victory in the Edmund & Josie Whelan Memorial Listowel Stakes on Tuesday.

?? "Tell me what you want, what you really really want"

Fozzy Stack’s filly had raced exclusively in pattern company so far this year, most recently finishing down the field when a 150/1 shot for the Group 1 Matron Stakes on Irish Champions Weekend at Leopardstown.

Returning to listed level for the first time since winning at Killarney in August of last year, the daughter of Camelot was a 14/1 shot under Chris Hayes – and proved her class with a near two-length verdict over Aidan O’Brien’s Keats.

Hayes said: “She had a good run the last day in superior company. We followed them around – they went good and hard, and the ground was as quick as she wanted – but the drop back in trip suited, and the rain came, which worked out a treat.

“That is probably her ideal trip (nine furlongs). She probably didn’t get home over a mile and a quarter, and they were going a gear too quick for her over a mile. She was able to get into a rhythm today and hopefully she can do something again later on.”

Jim Bolger and Kevin Manning combined for a double on the card, with 100/30 chance Sheer Bravado landing division two of the Feale Handicap and Agitare justifying 2/5 favouritism in the Jet & Peggy O’Carroll Memorial (C & G) Maiden.

The latter was not winning out of turn, having previously been placed at listed and group-race level this season.

Una Manning, daughter of the winning trainer and wife of the winning rider, said: “He was due his win – it took him a little while, but it was a good performance. The boss (Bolger) is delighted with him. He will get further and will go to the horses in training sale later on.” 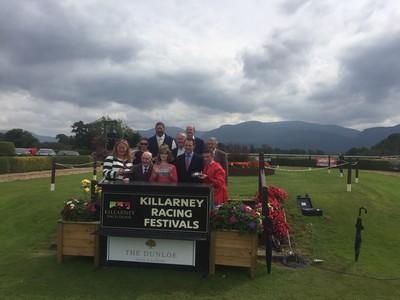