Just one final step...
You must confirm your email address by clicking on the link we’ve sent to your email address.
You are only one short step away from reading 5 free Field+ articles.
VIDEO: Lady Wannabe sparkles in Ruby Stakes at Killarney

VIDEO: Lady Wannabe sparkles in Ruby Stakes at Killarney
By Irish Field Contributor on 24 August 2019
Lady Wannabe won the listed feature at Killarney and two-year-old Raven's Cry may have a Group 1 target after her win at the venue

Jockey Chris Hayes, who was completing a double on the card, succeeded where Frankie Dettori had so narrowly failed when he and Lady Wannabe went down by a short-head at the July festival over this same course and distance.

A month on, there was no stopping Fozzy Stack’s 5/1 favourite this time as she led into the final furlong over a mile and moved a length and three-quarters clear of Waitingfortheday at the line.

The three-year-old filly had found Viadera just too good in another listed event last time, despite the assistance of Dettori on a rare and high-profile flying visit to ride in Ireland.

She was gaining just reward for her consistency, at up to Group 3 level, registering her second victory from seven attempts. Her dam Wannabe Better was a four-time winner and group class for Stack’s father, Tommy.

The Dunloe Hotel & Gardens Vincent O'Brien Ruby Stakes goes to Lady Wannabe, who goes clear to give Chris Hayes another winner on the day ?? pic.twitter.com/zaWLGrARFl

“She won it well, and I’d say she is improving with age, and her mother got better with age too,” said the County Tipperary trainer.

“She travelled well, picked up well and quickened well. She seems to get one mile two furlongs as well, so has plenty options and is in the Blandford (Stakes, at the Curragh) on Champions Weekend.

“She needs goodish ground, and thankfully it dried up a bit.”

Raven's Cry was a fine winner at Galway and now Paddy Twomey's filly, who has a couple of big entries in September, follows up with a comfortable success at @KillarneyRaces pic.twitter.com/ulXt20mGNV

Paddy Twomey’s juvenile filly holds Group 1 and 2 entries at the Curragh and Newmarket next month, and put herself firmly on course for those sorts of assignments with a three-and-a-quarter-length win in the hands of Billy Lee.

The winning trainer nominated the seven furlongs of the Moyglare Stud Stakes at the Curragh as a likely next target for Raven’s Cry.

He said of the 8/11 favourite: “She is in the Moyglare and Prix Marcel Boussac – and races like the (Listed) Ingabelle Stakes (at Leopardstown) or the Moyglare would be an option next.

“It depends on how she comes out of this, but the aim will be to get blacktype.” 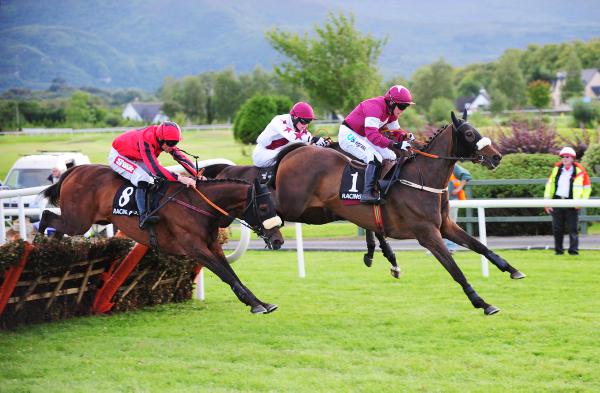 Racing News
Burke on top of his Game with first double
By Ryan McElligott on 25 August 2014
More in Racing News
Racing Field +
McAuley: 'I don't know if we'll get another one like him'
Racing Field +
SLIGO FRIDAY: Ambitious Approach gets his turn
Racing Field +
RYAN MCELLIGOTT: Five to follow
Classifieds
Place ad
Get full unlimited access to our content and archive.
Subscribe to The Irish Field
Unlimited access to The Irish Field via your computer, mobile device, tablet or newspaper delivered to your door.
Subscribe now +
Already a subscriber? Sign in